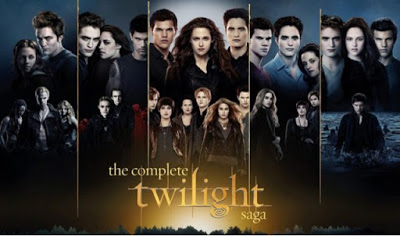 Because it fucking sucks. 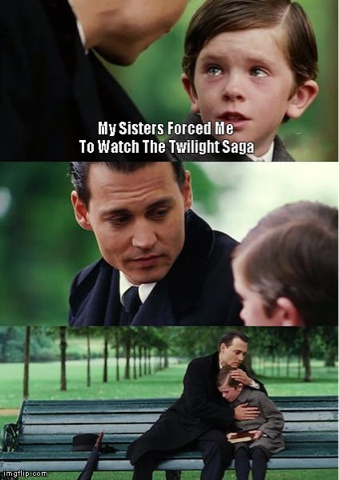 Full disclosure: None of the Honeys (or Nerdery Public) forced me to watch this.
I did it so we never would have to again.

Mopey Bella moves to live with her father. She makes friends immediately – for no real obvious reason. The one person she can’t make friends with is Edward. Edward constantly tells her to stay away from him, and yet he never leaves her alone. Through some teenage logic they fall deeply in love and Bella learns that Edward is a vampire. Made from crystals, apparently. Another boy, Jacob, is jealous of their love. You see, Jacob – inexplicably – is in love with Bella too. And what… Jacob is a werewolf, shape-shifter thing.

Is your little emo/goth heart going pitter patter yet?

Because shit happens and Edward leaves Bella and she is so heartbroken she begins to have night terrors. That’s right. Night. Terrors. But don’t worry, Jacob is there to save her. Until he’s not. And then Edward returns like a heroic demon in the night. More melodramatic shit happens where Bella – still without reason – is the center of the universe and these boys fight for her. Eventually Bella and Edward get married. Bella discovers the joys of sex. Edward discovers the guilt of sex. And lo’ Bella gets pregnant with Edward’s demon spawn.

But how? No one knows. Because teenage/Mormon logic. 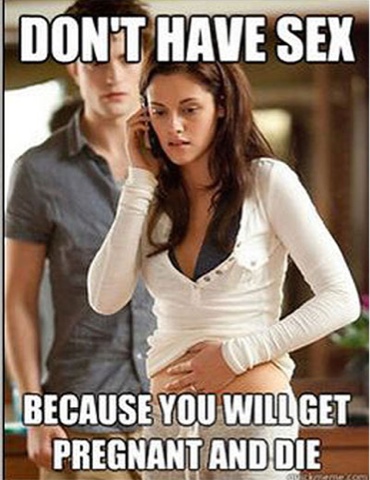 The demon baby is going to kill Bella, though. Because Bella is weak. (I was surprised throughout the entire series that getting out of bed in the morning didn’t kill her. But I’ll settle for a baby killing her.) It doesn’t, though. They feed it blood and rip it from Bella’s belly with their sparklepire teeth. Luckily, Jacob is there to imprint on her, basically claiming her as his own -since he can’t have Bella.

No. It’s fucking not. It’s creepy.

Since the sparklepire overlords don’t approve of vampire babies – and they don’t know that Renesmee (yes, that’s the child’s name. No wonder it wanted to kill Bella) isn’t an immortal child – they come to kill Edward and Bella and their demon spawn. After gathering a ton of witnesses to attest to the fact that Renesmee is a horrible name… no… isn’t a violation of the sparklepire rules, they all present a united front against the sparklepire overlords. A huge battle ensues. Almost everyone dies. (I am happy.) 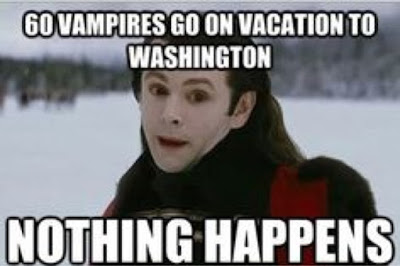 It was all a fucking vision. A VISION. Of what WOULD happen if the sparklepire overlords didn’t back down from their head hunt.

They all live happily ever after. Great.

I hated everything about this series. EVERYTHING. So, let me start with what isGOOD about this shitga (shit + saga):

Michael Sheen – He’s amazing in everything. I can only imagine what kind of debt he owed someone to be in this heaping pile.

Lee Pace – I don’t really need to explain myself here, but I feel like he owes me an explanation, for sure.

Charlie, the dad – That’s all really. I liked him.

That’s fucking it. That’s all that was good. THAT. IS. ALL.

What is BAD in this shitga? Well, I would need four of my own damn books to tell you everything, but lemme give you the basics: 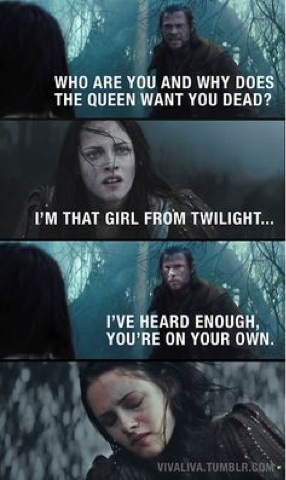 Bella – I thought that Barbra, from the original Night of the Living Dead, was the worst female character to ever be shit smeared across my screen. I was wrong. Bella is so weak as a woman, as a person, that she literally passes the fuck out because her man leaves her. She. Passes. Out. Are you taking that journey with me? Then she has night terrors and thinks she can’t possibly live without him. So she becomes reckless, with abandon, for her newfound love of taking advantage of her friend Jacob to help her continue to be reckless. Fucking awesome. Someone tell me why she was so special? Anyone.

The werewolves – Firstly, they were giant and cgi. Fine. But what about being ACTUAL werewolves? We’re supplied with the information that they are actually more like shape shifters. So, in theory they could then shift shape into whatever monster/creature they’d like. Yeah? No. They run around shirtless – in a cool, damp climate, by the way -wearing jorts and BURSTING into their furry alter ego. JORTS! 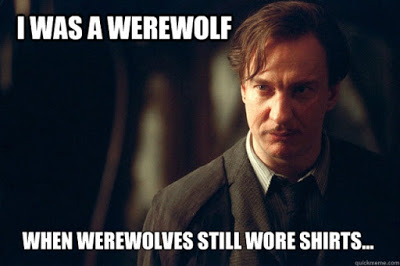 Edward – The stalkiest stalker that ever stalked until his fan fiction alter ego, Christian Grey hit the pages. Great. He had one look – brooding. He had one line – stay away from me. He had enormous hair. *eye roll*

Jacob, more specifically: imprinting – Listen, Jacob is fine through most of the films. He’s hardly there, actually. Until the end, when he imprints on Bella and Edward’s baby – essentially claiming her as his when she’s old enough. Because that’s not fucking creepy and weird. And I’ve heard the argument, “he can’t help who he imprints on,” or even “it’s not weird, it’s not a sex thing.” You know what? Shut the fuck up. He could have helped not imprinting on the creepy CGI sparklebaby. And it is a sex thing, because he thinks she now belongs to him, and when she’s still a little girl -he jokes about calling Edward “dad”. EWWWWW. No. Stop it. 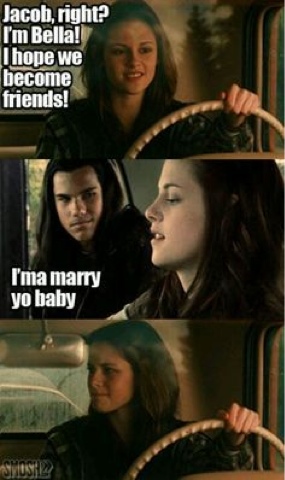 Renesmee – CGI sparklebaby. Also, the name. IT IS NOT A NAME.

To wrap it up as succinctly as the Revenge Honey – It sucks, don’t watch it.

Zombie Honey Rating: I WISH IT WAS ALL A VISION. A VERY BAD VISION.