Man, my childhood SUCKED. Cartoon-wise, I had to grow up with Little Bear and Kipper. Which were pretty good, but they can’t match up to the classic Saturday morning ventures like He-Man. Or the Thundercats. Or the Teenage Mutant Ninja Turtles. They just didn’t – and still don’t – make them like they used to…or do they? Maybe. A little bit.

There’s a new Saturday morning – or in this case late night – cartoon hero out there, and his name is Major Lazer.

Created by DJ Thomas “Diplo” Pentz, Major Lazer started as a reggae-dancehall music project by Diplo and his bandmates Jillionaire and Walshy Fire and has spawned three albums, countless EPs, a ton of music videos, and finally this pretty fucking nuts Saturday morning style cartoon for adults. Hundreds of years in the future, laser-armed Jamaican superhero Major Lazer fights the forces of the evil President Whitewall and General Rubbish with the President’s troublesome daughter Penny and his Cockney computer geek friend Blkmrkt (“black-market”). What follows are a ton of ridiculous adventures revolving around drugs, raves, vampire sex, K-Pop, and of course…lasers. 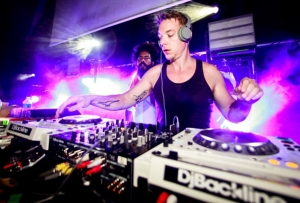 Diplo, the dude behind Major Lazer, getting hella turnt up. Like you do.

If you remember G.I. Joe or Voltron or the classic Transformers cartoons, so do the creators of Major Lazer. While dropping into anime and 3D animation every once in a while, the show never loses its ‘80s cartoon roots. The visuals are trippy and fantastically colorful, and the dialogue is wonderfully cheesy. To top it off, Major Lazer occasionally stresses good values, G.I. Joe style, by looking directly at the camera. “What are you doing out of school? You know how Major Lazer feels about education…*looks at camera*…it’s important!”

Major Lazer deals with some wonderfully random topics. In the very first episode, the Major refuses to let Penny come with him on his weed vacation, so she goes and buys her own weed from the mysterious Weedman…and the Major must rescue her from a really, really bad trip. Another episode involves a codeine-powered supervillain poisoning the water supply with cough syrup. Yet another involves a two-day eclipse allowing a swarm of vampires to come out and party for a…Vampire Weekend. (The lead vampire is of course voiced by Vampire Weekend’s singer.) 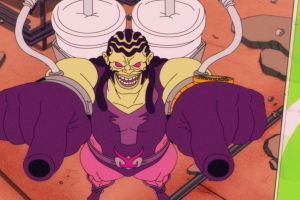 If you’re as into EDM culture as I am (and I doubt you are, buuuut) then you’ll definitely appreciate some of the little jokes the writers make. There’s an entire episode devoted to Penny holding a party on the lost island of Ibiza, destroyed by a foam party disaster in 2015. Of course the most obvious joke is that of the episode where Dr. Nerd steals the bass drop of every song in the world and combines them all into one massive bass drop. There are DJ tag-teams and riffs on DJs who talk too much. It’s a ton of fun. 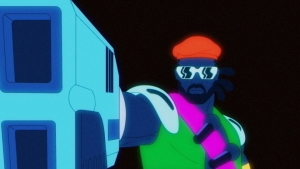 The Major himself is voiced by actor Adewale Akinnuoye-Agbaje, aka Mr. Eko from Lost.

Since Major Lazer started as a music-based project, the episodes are PACKED with awesome tunes you can dance to. With help from Diplo, the characters perform their own head-boppin’ theme songs (such as Dr. Nerd’s “Bass Drop” performed by Andy Samberg and Double Cup’s “2 Cups” performed by Riff Raff), alongside a kickin’ score by Major Lazer themselves. Some songs from other EDM artists make appearances too like “Can We Go Up” by Paper Diamond, “Meow Machine” by Dillon Francis & Kill The Noise and “Turn Up” by Gent & Jawns. Even “Roll The Bass” from Major Lazer’s newest album makes an appearance. It’s basically a rave in cartoon form.

If you like the sounds of Major Lazer, then be sure to check out Diplo, Jillionaire and Walshy Fire’s new album Peace is the Mission. And if you like the sound of the show, you can watch the whole first season on Hulu for free, or watch this FXX interview with Diplo if you want to know more. Peace, love, unity, and respect! 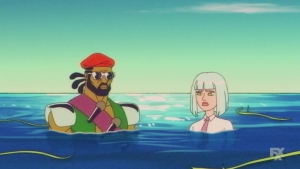