A very unhappy Hexmas to you! And, you! No, wait, I don’t think that’s right. Either way – it’s Hexmas – and I’m starting off this month of celebrating slashers with an oldie but nudie: Dressed to Kill (1980). 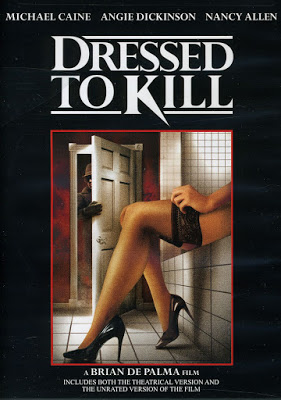 Dressed to Kill starts off – not at all innocently – with housewife Kate, seductively, showering in a fantasy. As she awakes we see her in a less than fulfilling sexual situation which is later verified as unfulfilling at Dr. Elliot’s office, her shrink. When Kate’s advances are turned down by Dr. Elliot she makes her way to a museum to sulk. Sulking soon turns to flirting and taxicab fucking. Completely satisfied with this sexual encounter, Kate leaves her stranger-lover and heads home, realizing after the fact that she left her wedding ring behind. In an attempt to retrieve it she heads back to the affair pad, only to be greeted by a tall blonde with a straight razor. Kate is slashed to death in an elevator and Liz, a high-price prostitute, finds the body and catches a glimpse at the killer. Liz, now suspected by the snarky Manhattan Detective Marino, teams up with Kate’s inventive son to find the real killer: a schizophrenic, transexual with a penchant for slicing and dicing with shaving implements.

Hoooo boy. That’s exciting and sexy. Seriously, though, so sexy; and not just because of all the boobies, but because of all the style and visual elements reminiscent of Hitchcock. From the blonde bombshell to the low angles, the scripted with silence scenes to the meticulous character types – Hitchcock pretty much oozed through Dressed to Kill in the best way imaginable. It was quite a treat really.

The museum scene, in particular, stands out almost more than the violence of the first murder – even in the most mundane of situations. It’s a solid ten minutes of non-verbal flirting, following, and fleeing that culminates in a backseat romp – the polar opposite of the lead up.

Regardless of the sexy times weaved throughout the film, there is never a moment that is peaceful. Between the score and the meticulous detail in every shot, you’re always a little bit on edge. Case in point: there is a scene where Liz is trying to escape the killer and they end up within feet of each other. Though the killer is in the background, as Liz turns her head – to look behind her, like women do in horror movies – the killer mimics her motions; just in the periphery of the audience. It’s a fascinating mirrored shot that made me pause.

This is a key element to the suspense levied in Dressed to Kill, everything is within reach, but only slightly. DePalma manages to set you up with quite a bit of foreshadowing, before you realize it could even be foreshadowing, and then he snatches it all away. And while – as per the rules of most slasher flicks – the plot is relatively ludicrous, it’s also a little bit plausible. Sneaky slashers.

And the shower scenes.