You knew this column would eventually get back to the subject of poop. You just knew it. Here are six of the worst things to do on the toilet… besides pooping, that is*:

6. Anything besides pooping. — Let me get this one out of the way first: if you’re in the bathroom to poop, just poop. Don’t do anything else. 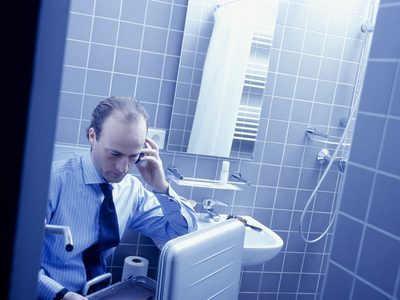 5. Working. — More and more often our workday is spilling out of the nine-to-five mold. I myself choose to work 7:30 to 4:30. And, sure, answering the occasional e-mail after hours isn’t a big deal, but don’t do it on the toilet.

Have you ever gotten stuck in the e-mail hole? Where you answer one, and then have to answer about thirty more? Yeah, that’ll leave you with pins-and-needles for days. And you’re on your phone. It’s even worse if you’re doing it at the office; a good company will not fire you for taking ten minutes to poop, and if you don’t answer an e-mail in that time, there’s probably a good reason. And for the love of whatever you hold holy, don’t bring your laptop in there. Do you know how many more germs you’ll get on your already-probably-filthy keyboard?

4. Carrying on a conversation. — This is mostly the bane of parents and couples, but let me tell you just how much fun it isn’t to have to shout through the bathroom door when my child is asking me where something is or if she can do something.

Bathroom acoustics are weird. Sometimes you can be heard quite well; sometimes you can’t be heard at all. It depends upon door placement, wall placement, and human placement. If you’re trying to be heard clearly and accurately by a seven-year-old who’s a master of finding loopholes, you don’t want to leave her any. So you end up speaking louder and more clearly, like you’re trying to get voice-to-text to understand exactly what you want to say. But sometimes the child doesn’t understand, or can’t hear every word, and you start yelling, and then the child thinks she’s done something wrong when really she hasn’t. Then you have to apologize. Loudly. 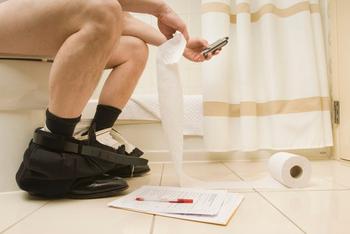 3. Talking on the phone. — Yes, yes, I get it, sometimes you have to take a call, and sometimes you’re having a poop when that happens, but in general, you really shouldn’t.

Setting aside the whole “you could drop your very expensive phone into a toilet full of poop”, it’s usually obvious when you’re in the bathroom. The echoes are different, you don’t have all your support material (if it’s a business call), and you’ll never be able to courtesy-flush. And woe betide you if you’re in a public bathroom where other people can fart loudly… or where the automatic flush catches you at inopportune moments.

2. Playing an online game against a human opponent. — This one has come back to bite me in the ass more than once. One of my favorite go-to games on my tablet is Ticket to Ride, which you can play online against actual human beings, instead of just the computer. So why not log in (derp) and try?

In general, a two-player online game of TTR takes ten to fifteen minutes. That’s not terribly long, not really. Sometimes they’re shorter. But given that it can take a few minutes to get into a game, and given that some people take fucking forever to draw two cards from the deck, and given that you might decide to play a four-player game instead, you could be sitting there for a while. And if you lose, you’re going to want to play again… and again… and again… until you finally win or your legs fall off.

1. Sleeping. — Okay, I get it. You’re tired. It’s been a long day. Your kids kept you up late. You’re sitting still, and it’s reasonably comfortable, and you just… doze off.

Two words: falling off the toilet with Klingons still circling Uranus. Now that’s what I call a messy situation.

Speaking of falling off the toilet, check out this picture: 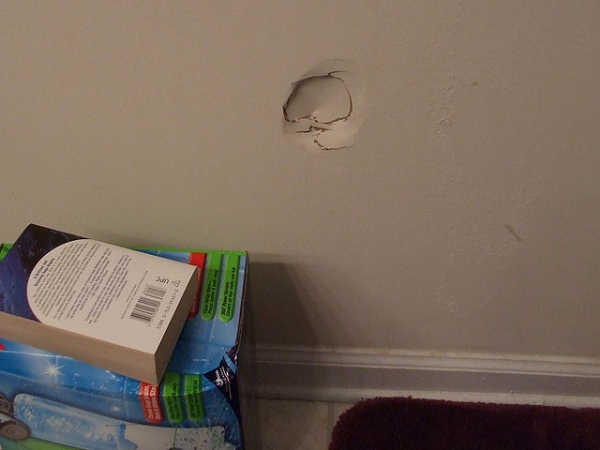 I had the flu once, and didn’t know it. I just knew I was sick, and I had to go to the doctor that day. But I felt queasy and nauseous, and I had to poop, so I decided I would sit down.

That’s when I passed out.

It took almost four years before I bothered to get that dent fixed.

* I’m leaving off the obvious ones like “eat” because that’s just disgusting. I’m limiting it to things people generally do do on the toilet.