SIX OF THE WORST… things about recipe websites

Recently, my wife and I were discussing what we could do to update our menu. We tend to cook the same things, week-in and week-out. But there’s a reason for that.

Well, actually, there are two.

The first is that my wife has some issues with spicy foods, as well as certain tastes. Some people might just not like spicy, but in her case, being a supertaster, there are problems not only with certain strong-flavored foods but also with certain textures. While she’s willing to try new things, there are still a lot of foods we can’t eat together. I don’t mind cooking multiple meals at once, but I can’t do that every night. Just making pasta for the family causes the kitchen to look like a disaster area; imagine that happening six or seven nights each week! 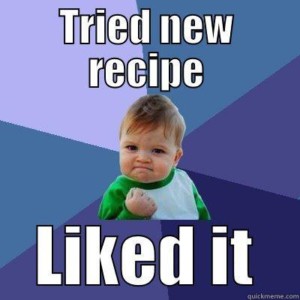 And then there’s my daughter. She’s kind of a picky eater, but not in the way most normal kids are. She eats a variety of food, and she has no problem with fruits, vegetables, meats, or dairy, but she refuses to step out of her lane. So when she is with us (which is about half the time), we’re limited to meatloaf, burgers, quiche, sauteed chicken (made very plain), grilled cheese and soup, and pasta. On the bright side, it makes it easy for us to pick places to eat out… but it also means I’m stuck cooking the same things every week.

We do have a few cookbooks, and we’ve adapted recipes from them (I’m turning into an old pro at removing things we don’t like and adding things we do), but cookbooks take up a lot of space, and for some reason almost none of them are spiral-bound. Have you ever tried to keep a cookbook — especially a new one — open to the page you want? It’s almost impossible! You have to put a heavy can of something on the page, or find a bag clip (difficult if the book is too thick), and then you have to find a place to put it while you’re working. It’s just such a pain. Plus, my kitchen doesn’t have enough space to keep a cookbook open in my prep area. I guess I could rearrange things, but it’s taken more than six months just to remember where I keep certain utensils, and on top of that both my daughter and I are still opening the freezer instead of the trash can and vice versa. 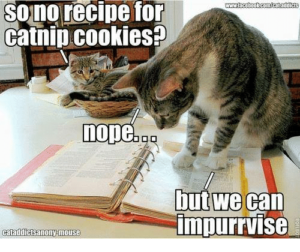 6. I hope you like photo galleries. — Photo galleries exist for one reason and one reason only: to get ad views. With the advent of lazy-load and polite-load (are those the same thing? I can never remember) it’s super-easy to have all the images on a single page. But if you do that, people will only see the ads you have on that one page, and they won’t reload ten or twenty or eighty times, gathering more data for the advertising companies to use for targeting (and retargeting). Plus, they take forever to load. A good photo gallery will only reload the image (and I guess the ads); it won’t have to reload the entire page each time.

Pet peeve: Sites that scrape other sites, create photo galleries out of them, and then make you click yet another ad-filled link just to show you a recipe. Looking at you, Delish. 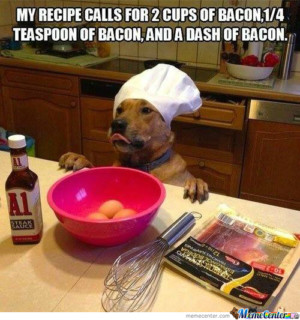 5. Here, watch this video. — What’s the only thing worse than a photo gallery of a recipe? Being forced to watch a video, furiously taking notes on what needs to be done, rewinding, rewatching, and still forgetting something. Plus, have you ever watched someone cook something on TV? Half the time they don’t tell you all the ingredients until they actually use them. Especially with competition shows. Honestly, forcing me to watch a video is the fastest way to get me to click away from your recipe, article, or site. And on top of that my food is almost never going to look as good as the food in the video, which is just demoralizing.

Pet peeve: Videos that are just still images chained together with crappy Powerpoint transitions. Video CPMs are way higher than standard display CPMs. But that’s a dumb reason to make video content, and users know that’s the only reason you’re doing it. 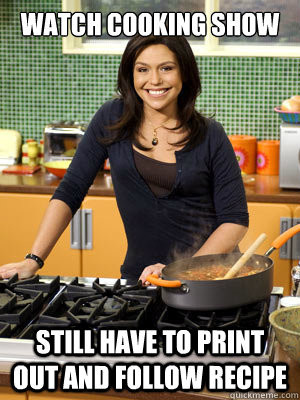 4. Of course we have a style guide. — Have you ever tried to actually use a recipe website? They fall into basically two categories: the ones with actual recipes featured (like AllRecipes) and the ones where you have to read a story before you get to the recipe. It’s the latter ones that I want to talk about. Their fonts are usually too small, their color schemes are all the same, it’s hard to find their print buttons sometimes, and, oh yeah, there are about 16 gigantic photos that have to load, as well as ads and JavaScript pop-ins exhorting you to click this, that, or the other thing. If you blink while scrolling, you’ll completely miss the recipe — especially if you’re on mobile.

Pet peeve: I will not ever sign up for your mailing list. Stop asking me every single time I come to your site. In fact, stop asking me, period. Besides, it’s hard to monetize a mailing list — many ad servers won’t even support putting the ads on emails, so it’s a lot of work for relatively little payoff. 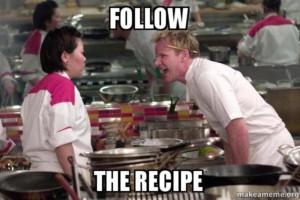 3. Have you seen my recipe on Pinterest? — Pinterest is quite possibly the most annoying content aggregation service in existence. It’s good for the person doing the aggregating; not so much for the person googling a recipe and then ending up on someone’s Pinterest page. At this point, I’ve started adding -inurl:pinterest to all my Google searches, and -inurl:pinimg to all my image searches. That helps a lot, because somehow the people who work at Pinterest have found a way to keep their pages at the top of many Google searches. I am never going to use Pinterest to find a recipe.

Pet peeve: Every time I mouse over an image, a little icon shows up with a P. That’s great for people who actually want to use Pinterest, but I have to find a browser hack so that I stop seeing it. It just bugs me. 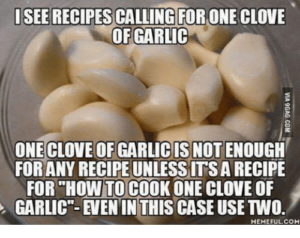 2. I swear I’ve seen this before. — One thing I’ve learned from watching cooking competitions is that there’s always another way to make something stand out. Now, to be fair, I’m not even on the same planet as Top Chef contestants, but even I know how to modify recipes so they’re not always the same. But a lot of recipes all start with the same base ingredients and cooking style, and when you Google, for example, zucchini recipes, all the sites have the same recipes — and many sites repeat recipes as well. Do you have any idea how many recipes call for you to halve a zucchini, scoop out the middle, and fill it with stuff? I’ll tell you how many: a lot. Y’know what I would love? A way to mark off recipes I’ve seen so that the next time I want to find something to do with chicken I don’t have to go through 300 types of enchiladas, bakes, skillets, and one-pan solutions just to find a recipe I haven’t tried before.

Pet peeve: A recipe should tell you all the things you need to make it. If you have to make some sort of seasoning combination, tell me how to make it myself, just in case I don’t have time to go out and buy it. (A Kosher cookbook I have keeps saying “add za’atar”, but nowhere in the book does it tell me the exact measurements to make my own.) 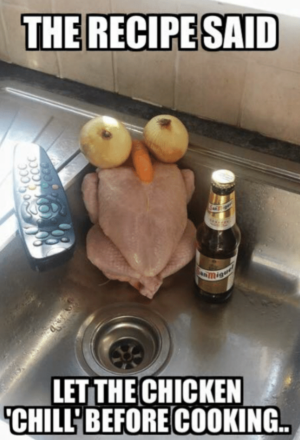 1. It’s a long story. — The introduction to this column is more than 500 words long. I could probably have done it in 100 or 150, but I was making a point, and that point is that nobody cares about your long-ass story. I don’t want to read about you not eating chicken when you lived in Moscow, or your husband’s love of granola, or — worst of all — have to scroll past a ton of photos (trust me, nobody looks at more than the first two) just to get to the recipe. Look, I know why you’re doing it — because you can link off to other recipes (more ad views) or affiliate products (more money from Amazon). But that doesn’t make it right. At the very least, can you put a button at the top of your template that says “skip to recipe”? I mean, you’re all using the same basic two-column template anyway; if one person does it, won’t it, like, propagate out to the entire internet like some sort of virus or meme? One can hope.

Pet peeve: When I read a recipe, I want to read what it needs, how to make it, and how long it will take. I don’t need your asides about “it’s even better if you add X” or “cook it ten more minutes for a louder crunch”. Put that info in your story, or let me print a basic version of the recipe.

Another pet peeve: Remember those exclamation points I put in the intro to my column? That was specifically to satirize the people who try to sound genuine by using exclamatory phrases in their long-ass stories. Stop doing this. It comes across even more fake than if you just used declaratives. 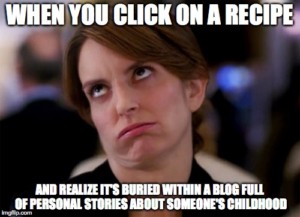 Since you made it all the way to the end of my column about recipes, reading paragraphs and looking at pictures, I’d like to share with you a recipe that I adapted from some website somewhere. It’s my wife’s favorite thing that I cook, and we do eat it every week. If you like plainer foods, you can make it as-is; however, it also works with spices, or additional vegetables. Totally up to you. I usually put salt and pepper on the rice, and then some sort of hot sauce (I’ve been really into Morefire and Dictator lately).

We call this “Turkey Skillet”.

Total prep time: 45 minutes. Serves four, technically, but usually my wife and I just split it and eat the whole thing.

Now, think about how much more quickly I could have presented that recipe. Got it in your head? Good. Go build a recipe site template that replicates the process and make everyone use it, instead of the ones they’re using now. 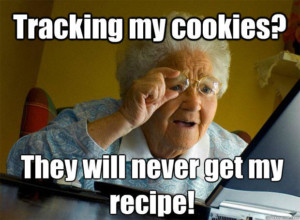 Space travel, steampunk Seattle, superheroes, and more. (But no zombies.) Check out Josh’s collection, The Clockwork Russian and Other Stories, which has been called “intelligent, compelling, and always entertaining” by award-winning author Sean McMullen, and “clever, thought-provoking, and occasionally unsettling in all the best ways” by award-winning author Andy Martello. Get your copy today!