SIX OF THE WORST… things about conference calls

Many of us nerds are forced to sit through interminable conference calls — and most often more of them than we really need to be a part of. If you’re a technical person, you just get added willy-nilly, “just in case”, and it can really ruin your day. Here are six of the worst things about conference calls. 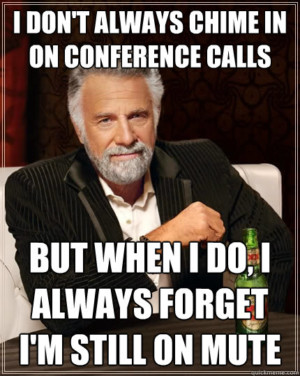 6. They never start on time. — This is really a bigger problem with the meeting culture at large, but in my experience no conference call really starts on time. It’s always “let’s give everyone a couple of minutes before we start”, which annoys the hell out of me because my time is valuable — and so is everyone else’s. If you’re not on time, then you miss the beginning.

Even worse… …is when people join five, ten, or even fifteen minutes late, and the leader will have to recap everything that was just discussed because that one person is the person who actually needed to be there. 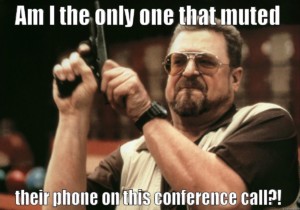 5. The systems don’t work. — When you’re trying to share your screen, odds are good that the system won’t work, or that it won’t work on someone else’s computer, or that the right screen won’t show, or any other number of issues. I’m on a Mac at work, but Skype for Business for Mac doesn’t work with our systems yet so I’m stuck on Lync, which refuses to share any screen other than my main one, so I can’t expand outward onto a second screen and refer to my notes while presenting. 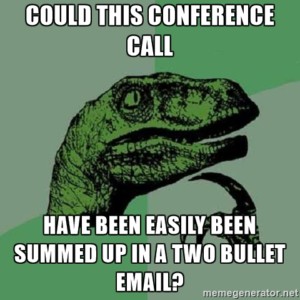 4. “Hi, who just joined?” — Project managers are responsible for making sure the people who need to be in a call are actually present. I get that. But I used to sit next to a PM at one of my old jobs who, every half-hour, would go through a five-minute litany of “hi, who just joined?” I understand that several of these systems have an option to record your name before joining the conference, but no one does that. Including me.

Even worse… …is the small talk people engage in when they join. No one wants to hear it. 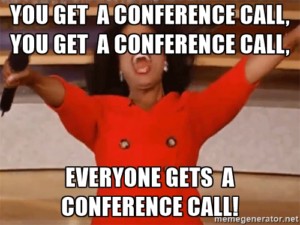 3. People come and go. — You have to dial into a conference call one of two ways: over the phone, or over the computer. Most people don’t have land lines anymore if they’re not in the office, so they dial in via their cell phones, which drop like crazy — and that’s even worse if the call leader is the one with the bad signal. As for computers, if you run low on bandwidth, your voice drops out digitally or you get completely punted.

Even worse… …is how much extra time all of this adds to conference calls. Even if everyone is dialed in via their computers on a broadband line, someone is going to drop or cut out or forget to come off mute, and that’s going to add additional time — plus time for everyone to have a good chuckle (that I never join in). 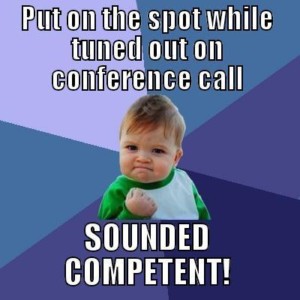 2. It’s hard to understand people. — Given how sharp voice calls can be over Hangouts, Skype, FaceTime, or even when I use my phone to call another T-Mobile customer, you’d think that telephone audio would improve. But it hasn’t, not as long as I’ve been alive (other than getting a little louder). Now imagine ten people all on the telephone, all trying to be heard, and the amount of fuzz on each person’s voice, and you just want to tear your hair out.

Even worse… …is when there are folks from different backgrounds on the call. If you’re not used to listening to certain accents or speech patterns, it can be really difficult to focus on what someone is saying. In person it’s much easier, because you can watch the person’s face and subconsciously get clues from lip movements (maybe that’s just me, though); over the phone, there are a lot of people I work with semi-regularly who I hate talking to on conference calls because they’re hard to understand. 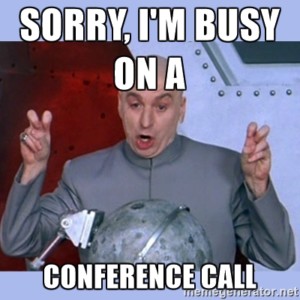 1. They interrupt your train of thought. — A cursory googling will find countless articles and comics like this one, showing how a simple interruption can destroy an entire train of thought. It takes a really long time for most people to get back on track, and if you have meetings scheduled every half-hour or so with only short breaks in between, you won’t get anything done. You can be on the biggest roll of your professional career but when that conference call about something that only tangentially affects you and that you won’t have any insight on rolls around… you damn well better drop what you’re doing and show up.

Even worse… …is that people resort to working after hours just to get their work done without interruptions. This is the exact opposite of work-life balance. 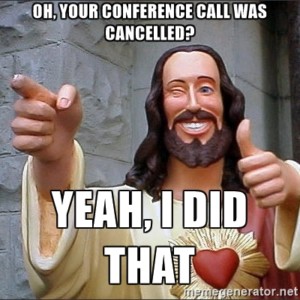 One thing I like to do when I schedule meetings is to do them for 45 minutes. That way, I can guarantee people a 15-minute break and they won’t have to run to their next meeting… and, even better, it eats up the meeting room for the whole half-hour (because my company’s Outlook can only support half-hour increments), so if we have to run over by a few minutes we won’t get kicked out. Just a little pro tip from your friendly neighborhood columnist. 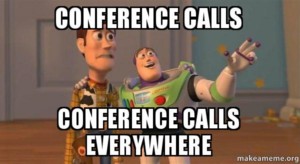