SIX OF THE WORST… things about the Abramsverse

If you didn’t know there was a Star Trek reboot series, helmed (for lack of a better word) by JJ Abrams, then you probably don’t live on the planet Earth. And even though the latest iteration isn’t written or directed by Abrams, it’s still part of that reboot universe.

Which, for some reason, a lot of Star Trek fans really don’t like.

Now, I admit that the films have their problems, but that doesn’t mean we Roddenberryverse fans should hate it just on principle. Especially when there are plenty of legitimate reasons. So, here are six of the worst things about the Abramsverse. 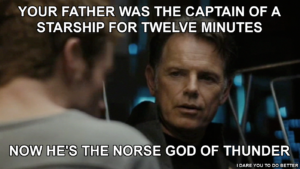 6. It’s trying to be everything to everyone. — When we think “Star Trek”, we think Captain Kirk, Mr. Spock, and Dr. McCoy. So of course when JJ Abrams rebooted the series, he had to give us those characters. And you can’t have them without Scotty, Uhura, Sulu, and Chekov. But what could have been done with this money and story if we were introduced to an entirely new crew, universe, and mythology? Even if we had the same actors, and even if they were in the same roles (Chris Pine as the captain, Karl Urban as the doctor, Simon Pegg as the engineer), the story wouldn’t have been beholden to the Star Trek mythology, even though it was rebooted about 25 years before the bulk of the first film took place.

That said… The first film (which I call Star Trek 11) was pretty accessible to non-Trekkies. The main characters got enough introduction that we knew who they were, and the main relationship (Kirk and Spock’s friendship) was built up nicely. Sure, the film had its issues, but it was pretty enjoyable for both Trekkies and muggles.

5. Pandering to the fans cheapens the experience. — In order to keep the fans happy, the Abramsverse has to include things that might otherwise not make sense. For example: Tribbles, the Mudd Incident, Admiral Archer’s dog, and Khan. But the real die-hards know that (a) Tribbles weren’t studied by Federation scientists until after the K-7 incident (b) if you didn’t grow up watching TOS as it first ran, you don’t care about the Harry Mudd episodes (c) since Admiral Archer had a dog, does that mean Enterprise happened as expected, and if so, did that one incident with the Kelvin really change Starfleet that much (d) Khan’s ship was floating around in the middle of nowhere for quite a while, so how did Admiral Robocop’s people even find it as far as they did before it was found in the original timeline? Add to that the Klingons (with their new facial piercings), the Romulans (with their facial tattoos), the Prime Directive (which isn’t clearly explained in 12), and that whole mess with the ship being underwater (just because it “looks” cool), and you fail at every level.

That said… I do think destroying Vulcan was a good move in 11. It completely changed the game. (Unfortunately, Old Spock as deus ex machina in 12 ruined it.) 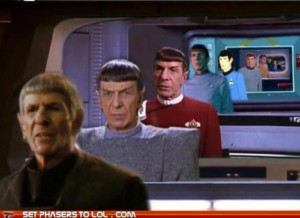 4. They keep destroying the Enterprise. — In 11, the ship was nearly destroyed when it was sucked into a red-matter black hole. In 12, it was nearly destroyed by Admiral Robocop’s dreadnought. In 13, it looks like it’s actually going to be destroyed completely. Look, I get it: the stakes have to be high enough that the viewer cares about what’s happening. But you can’t blow up the ship in every movie. After a while, it starts to become de rigeur and the audience ceases to care. 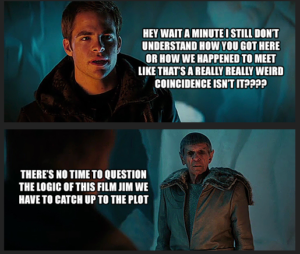 3. The ship is inconsistent and confusing. — In 11, Chekov managed to run from the bridge to the transporter room without taking any turbolifts or stairs. Now, it’s established that the bridge is still on top of the saucer, but now the transporter room is too? Later, when Scotty and Kirk beamed into the engine room, there were tons of useless catwalks and pipes. Main engineering is a giant mess, with the exception of the warp core, which looks like part of that interrogator droid Darth Vader used on Princess Leia in A New Hope. Compare that to 2, when Admiral Kirk toured the engine room in the beginning: there was a clear engine core, everything was neat and organized, and there was a room that looked an awful lot like a reactor room (we didn’t know what it was until the end, but anyone with even a smidge of engineering knowledge would have understood).

That said… The bridge looks pretty awesome on the inside, once you take away the lens flares. 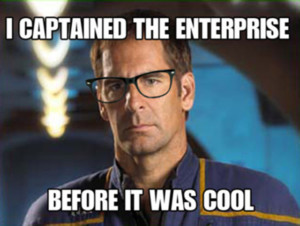 Still simple, sure, but smarter in pretty much every way. Even the vengeance plot in 2 was more complex than just “I want to kill the people who hurt me.”

That said… I actually rather liked Khan’s motivation in 12. I just think it was poorly executed, and having a white actor named Khan didn’t help. 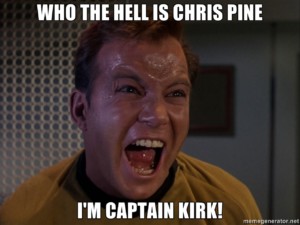 1. He doesn’t really care. — JJ Abrams has made it clear that he doesn’t care about Star Trek and that he wasn’t really a fan. The latter is certainly fair, but the former? Why would you give a franchise as big as Star Trek to someone who doesn’t really care about it? Just because he’s the new hotness? It’s like when Joss Whedon got pulled in too many directions because he was making Buffy, Firefly, and Angel all at the same time. The difference is that Whedon tried to do his best with each show, while Abrams is focused solely on Star Wars to the point that he probably has nothing to do with Trek anymore. Give the series to someone who cares about it, who’ll shepherd it through the way that Kevin Feige does for Marvel — or even how Rick Berman tried to do with Star Trek after Roddenberry had to step back. (Say what you will about Berman, but he did seem to care about Trek. It was his vision he cared about above all others, but at least he cared.)

That said… Abrams did a great job with Episode 7, and I approve of him allowing Simon Pegg, a Star Trek fan for life, to co-write the script. (Pegg has other writing credits; he’s not doing this in a vacuum.) 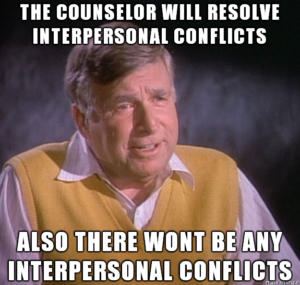 To be fair, not all of Gene Roddenberry’s ideas were great either.

While four tie-in novels were commissioned to be released after 11 (and they may or may not have been canon), to my knowledge they’ve been indefinitely shelved. However, if you’re looking for a decent story that takes place in the Abramsverse, you could do worse than this piece of fanfic: “When Sparks Fly Upward”, by Jedi Buttercup. 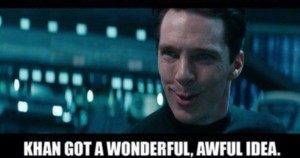