SIX OF THE WORST… Halloween costume choices I’ve made

I enjoy Halloween. I like candy, and I like not having to do work because of Halloween-related activities. I think my costume this year was pretty good (check my social media to see photos). But I’ve worn some Halloween costumes that probably weren’t the best choices. Here’s six of the worst of them. 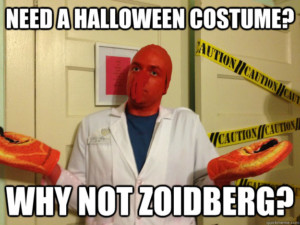 6. Executioner — At the time — elementary school — I thought this costume was super cool. I wore all black, and I had a hood and like four toy weapons, including an axe and I think a flail. It was super hot under the hood, and I eventually took it off, but for a while it was one hell of a great costume. It’s just that you can’t wear long sleeves, long pants, and a full-head hood with facemask that covers everything but your eyes when you live in south Florida and it’s super-hot all the time. Plus, I couldn’t wear it these days because of zero tolerance.

Abandoned Costume Idea: One-Punch Man — Ever since I saw One-Punch Man I have wanted to dress up as Saitama. He’s bald; I shave my head. He’s a superhero; I like superheroes. He deals with depression; I deal with depression. And the costume is fairly simple. But the closer I got to Halloween this year, the less interested I was in getting the parts and putting it together. Maybe another year. 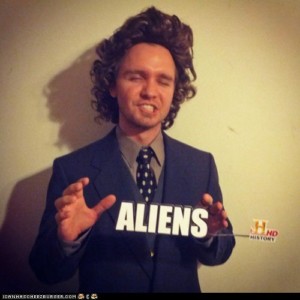 5. BoJack Horseman — Speaking of wearing costumes that are hot, back in 2015 I was BoJack Horseman. I’d watched the show on Netflix and really enjoyed it, and it was a pretty simple costume: horse head, blue-green shirt, gray sweater, jeans, and red shoes. I think I spent a total of $40, and some of it can be reused. But I went to an outdoor Halloween party, in mid-October, in Georgia, and it was ridiculously hot with the long sleeves and the horse head. Plus, I couldn’t even really see out of it; I wear glasses, and they didn’t really fit inside the head. Without them I started to feel claustrophobic. On the bright side, I did win 4th place in my office costume contest.

Abandoned Costume Idea: Flash — This isn’t really my idea per se, but an idea I had for a co-worker. In 2011 a group of us dressed up as the Superfriends (I was Aquaman). One of our coworkers wanted to join ironically, so I suggested he dress up as the Flash, and when we all went out for the judging, he would run up… wearing a giant red box with “Fl” on it. Because, y’know… Flash. Hey, I was amused. 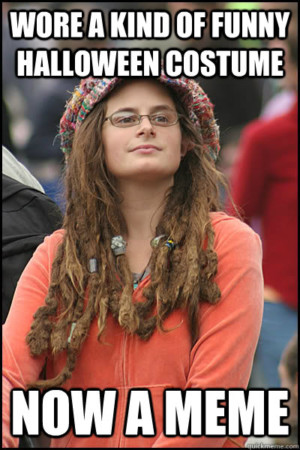 4. Charlie Brown — I love Peanuts. Always have. I was Snoopy for Halloween when I was very little. But now that I shave my head, I can look a little like Charlie Brown. Of course, I had to shave my beard, and my wife told me never to do that again (and I hate the way it looks), but she drew Charlie Brown’s few hairs on my head, and I wore a Charlie Brown shirt, and I think I looked pretty convincing with my glasses off. Unfortunately, I also looked like a giant lump. So that’s not happening again.

Abandoned Costume Idea: Barf — After our success doing a group costume in 2011, I wanted my team to get together and do another group costume for 2012. I wanted us to be the cast of Spaceballs. And I wanted to be Barf (full name: Barfolomew). The costume wouldn’t be super difficult — a coverall with patches, some face makeup, a blond wig with dog ears, and a tail. I had a friend who could help me sew it together, and the money to buy it… but no one else was interested and by mid-2012 I had already committed to a different idea. 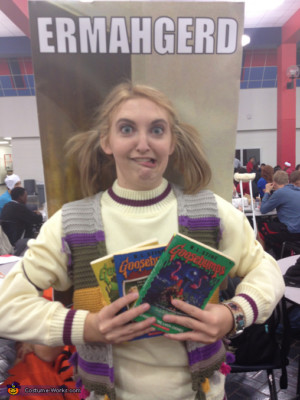 3. Dr. Evil — In college I was invited to my friend James’s Halloween pool party. At the time I thought Austin Powers was the coolest thing ever, so I decided to be Dr. Evil. I bought a gray long-sleeved shirt and gray sweat-pants, put on my white sneakers, added a bald cap, shaved off my moustache and goatee, and drew a scar on my face to match the character’s. People knew who I was, at least, but I didn’t really look much like Mike Myers’s incarnation, and anyway once it got to be pool time the costume came off and the swimsuit went on.

Abandoned Costume Idea: Redneck — Truthfully, I was just being lazy in 2008. I had completely forgotten to do anything for Halloween, so on the way to work I picked up a mullet wig and wore it all day. But I think the bigger story is that I was wearing what we called my “guest linen shirt”, which looks pretty much like the sheets you put on the guest bedroom… or, at least, the kind you used in the late 80s and early 90s. (Although come to think of it we do have a couple of super-busy sheet sets for our guest room too.) 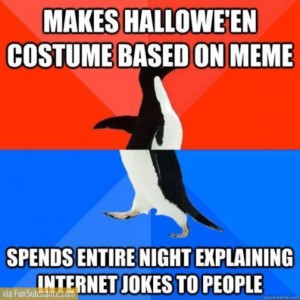 2. Charlie Chaplin — I decided to be Charlie Chaplin one year in high school, but almost no one saw it. I didn’t go to any parties, and I didn’t wear it to school. I just wore it in the house while I was giving out candy. An awful lot of work went into it, too — bowler hat, fake cane, drawn-on moustache, white shirt, black pants, suspenders. I don’t recall why I didn’t want to go out dressed like that, but I didn’t for whatever reason, so the whole costume was a waste.

Abandoned Costume Idea: Zombie — Now this one I remember distinctly. It was middle school — I think seventh grade — and there was a Halloween dance at the local community center. I figured it was Halloween-themed, so I should wear a costume. My mom made up my face as a pretty convincing zombie, complete with a bolt jammed into my forehead. But when we got there, I had a freak-out and made my mom drive me back home and help me take off the makeup. When I finally got back to the dance, I did go in, and there were a few people in costume, but not many. I decided I’d made the right decision. Unfortunately I was also wearing a fluorescent fuschia shirt and matching Skidz pants, so… well, you be the judge. 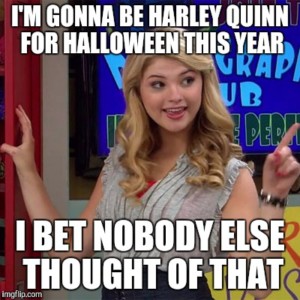 It is truly disturbing how many people think the Joker/Harley relationship is a good one that is worth emulating outside of roleplay.

1. A Match — I was invited once again to the same Halloween party where I’d attended as Dr. Evil the year before, but I guess I’d slacked off and not done much in the way of a costume. I went to the Halloween store the day before and it was completely picked-over, but I did find a bright orange wig. I added a long-sleeve tan shirt, tan shorts, tan socks, and brown shoes, and I went to the party as a match. It was pretty lame, but at least it was a costume.

Abandoned Costume Idea: A Browncoat — This isn’t Halloween-specific, but… the film Serenity came out in 2005, and in support of it, I wore brown. All brown. Brown shirt, brown slacks, brown socks, brown shoes. I went to the movie on opening night. I really enjoyed it. But no one figured out that I was a browncoat. I was just some guy wearing all brown. I guess I could’ve done a little more, but back then I worked from 11am-8pm and didn’t want to go home and change before catching the movie, so I just wore the “costume” to work. Talk about half-assing it. I’m pretty sure I didn’t even do that. I’m pretty sure it was quarter-assing at best. 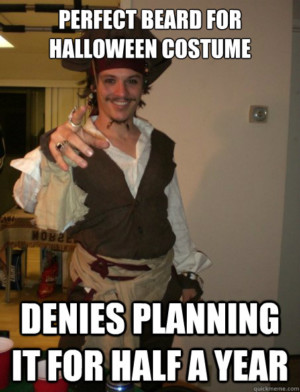 Probably the most fun costume I ever wore was that of Captain Hammer from Dr. Horrible’s Sing-Along Blog. Not only was I Captain Hammer, but I managed to convince two of my friends to join me as Dr. Horrible and Penny. We got our costume pieces together, and we spent two weeks’ worth of lunch breaks sitting in my car, practicing “A Man’s Gotta Do” — a song the three of us could sing together. I’m not a very good singer, but the other two were, so I needed the most practice. But I managed it, and we were satisfied with it, and we were ready to win the costume contest.

But as Halloween grew ever closer there was no announcement of any Halloween activities. I emailed the organizers from previous years, but they were on radio silence. Finally the day came and we were all dressed up and ready to sing… and the company did nothing. We’re pretty sure it was because the new CEO had demoralized everyone into not wanting to do anything fun and work-related.

Shame. I actually got good at that song for a minute. 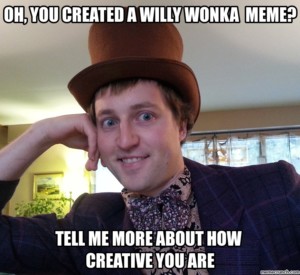