Hi there! This post has been getting a lot of hits since I wrote it, so I took it and turned it into a Very Unofficial Guide to Two Dots, which you can read on my website. I’ll be updating the guide as I progress through the game, and if anyone has questions, you can send them to me there. Thanks!

Two Dots* is a mobile game where you match two (or more) dots of the same color (which removes them from the board) until you reach a certain goal — x number of dots, or a certain other winning condition involving obstacles and challenges. Or both.

Two Dots is a fun game, at first. It’s somewhat challenging once you get to the later levels, but then it just becomes maddening. It’s not like Candy Crush, where you can’t possibly win without buying things or bugging your friends; it’s not like Game of War, where if you don’t play on a certain day you can be killed by other people; it’s not like Plants vs Zombies, where you download the entire game and play at your leisure. You can play Two Dots at your own pace, and with 560 levels (so far) you’ll be doing so for a long time. Especially since you only get five lives at a time, and it takes 20 minutes for a life to refill. 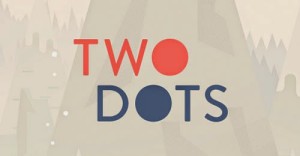 But the game is more than just “match the dots” (or “make a box”, which clears all the dots of that color from the board). See, the developers put in these obstacles to make things harder for you, and as someone who has beaten the game numerous times**, I’ve faced all of the obstacles. Some of them, like the gems, are kind of fun. Most of them… aren’t. Here are six of the most annoying:

6. Lotuses — At first, I thought lotuses were cool. They would eat all the same-colored dots they could touch, and clear huge swaths of the board. They can’t clear wild dots (more on that in a moment), but I thought I could manage them regardless. However, as the game progresses and more obstacles get added, the programming that controls (and dispenses) the lotuses gets sneaky, and they show up just when you’ve spent three or four precious moves building up to a box. Then they suck up part of your box and there’s a 50-50 shot that they won’t leave you in a better position than you were before.

My strategy: On certain levels, if you play them enough times, you start to figure out when a lotus is going to show up — like, in the first couple of moves. Planning ahead can save you a move or two. But otherwise? Try to clear as much as you can on every turn when you know that lotuses are going to be a thing, because the less damage they can do, the better. 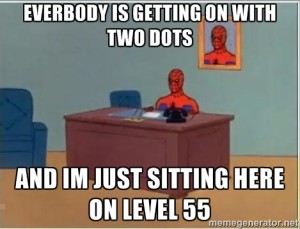 You WILL get stuck on a level for a long time. More than once.

5. Wilds — Wilds sound great, in theory. They’re little circles that can match anything, and if you make a box of wilds (it’s rare, but it happens), you clear all dots from the board. But lotuses can’t eat (or bridge) wilds, and sometimes wilds get stuck in an area where there’s no way to get rid of them, and at that point you just have to restart.

My strategy: Ultimately the strategy for wilds depends upon the size and complexity of the board. On a small board with a lot of nooks and crannies, you need to eliminate as many wilds as possible. On a larger board, you can leave them until you need them, because they do contribute to boxes. Also, in the 500s, you’ll find magnets, which are wilds that you have to match to other wilds, and then they cause explosions, destroying every dot they touch. So that’s a plus.

ALWAYS make sure the screen flashes before releasing your finger. Nothing in this game is more annoying than having a box and failing to complete it.

4. One-Sided Bricks — The first bricks you’ll encounter in Two Dots can be destroyed simply by making a match next to them. But then you’ll find these annoying little bastards that have one light side and three dark sides. You can only destroy them with bombs, gems, or by making a match on the light side… which is almost always facing the wrong direction. Or, worse, two light sides are facing each other, which means a bomb (or a booster box — more on those in the Bonus Content) is the only way. There’s one level in the 200s or 300s that I spent several dozen poops*** trying to pass — it was all one-sided bricks with the light sides facing in the wrong direction, and only about 40 moves.

My strategy: Destroy these annoyances as fast as possible, and don’t be shy about using your booster boxes if you don’t have an easy way to do it in the level (gems, bombs, balls****, or magnets).

3. Anchors — “Anchors are number 3? You’ve got to be kidding!” I’m not surprised you think so, but this early-level obstacle is so high up on the list for a few reasons. They persist through the entire game; they’re often locked in place by one-sided bricks or other blockers; and, worst of all, just when you think you’ve cleared all the other obstacles, you look at the top of the screen and oh, shit, I still have to get six anchors! If their appearance was truly randomized in the dropping process, that would be one thing, but there are literally dozens of levels where the computer only gives you one anchor on the screen at a time. Twenty moves, ten anchors, one on the screen at a time, and sometimes there’s a “grace period” move between the completion of one anchor and the presenting of another. Anchors are this high up because they’re so damn persistent an obstacle throughout the game, more so than any other.

My strategy: Truthfully, I think the best strategy is to handle the anchors last, unless:

Otherwise, focus on the other obstacles first. Many of them can destroy anchors — balls, gems, and magnets, for starters. (Oh, and, speaking of magnets: the “only get one on the screen at a time” often happens with magnets too; the later levels in the magnet zone only give you four, and they’re never where you need them to be.) 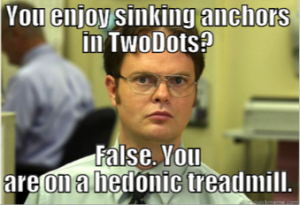 2. Fire — Fire sucks. It can be destroyed if you make a match next to it, if it’s caught in the explosion from a bomb or gem, or if a monster randomly eats it. If you don’t make a match next to it, it replicates itself, destroying a dot (or anchor, or lotus, or wild, or ball) attached to it. It seems relatively simple to get rid of, until you accidentally clear something in the center of a big fire zone; at that point, you now have two separate zones of fire, and each one replicates if you don’t match next to it. And sometimes, just for fun, fire is inside of ice (which in and of itself isn’t too bad, but it’s still a pain).

My strategy: Clear the fire as fast as possible, especially when you have a level where you have to get anchors. Anchor logic and fire logic together are a nightmare. And don’t be afraid to restart the level if you don’t think you can complete it; sometimes, that’s the only way. 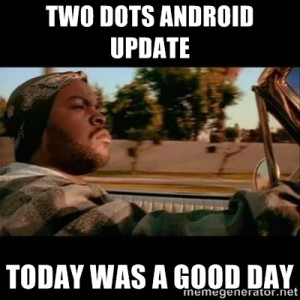 1. Slime — And you thought fire was bad? Imagine fire, but instead of destroying the dot (or obstacle) it touches when it replicates, it instead encases it in slime that takes two hits to destroy. Slime can be destroyed the same way fire can, but it’s more insidious because it takes two hits, and because when it replicates itself, it adds another two-hit space. Worse, slime doesn’t fall when you clear spaces underneath it, and it can expand into empty spaces where dots don’t exist (like when a block is above them). It’s awful. Nothing can destroy slime in one hit — not an explosion, not a gem, not a lotus. And there are many levels where you have to deal with a lot of small slime outbreaks — which can be helpful when they finally touch, but you still have to destroy them all. Good luck.

My strategy: First of all, accept the fact that you’re going to lose a lot of lives, especially on the levels where there are very narrow spaces and a lot of slime. Then eliminate the slime as quickly as possible. Be generous with your use of booster boxes; you’ll need them. And don’t get too pissed off when you think you’re done with the slime and the game gives you a random level that has some, just for funsies. 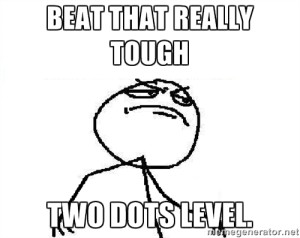 The people who make Two Dots also include bonuses, called booster boxes. These are power-ups you can activate at the start of the level. There are several types, they’re chosen randomly by the game, they’re never the one you want when you want it, and you’ll come to hate the bomb one quickly because it’s pretty much useless.

To make a little extra money, they often give you the opportunity to watch a video so you can get a free booster box to start the level. In fact, watching videos is always optional — you never have to experience ads in the game. But it’s often worth sitting through a 15-second ad for a free boost.

Of course, there are plenty of 30-second ads (mostly for Game of War, iBotta, and Mobile Strike, as well as the occasional local ad or movie trailer). In the beginning you could back out of them — you wouldn’t get the boost, but you didn’t have to watch them, either. Now, though, more and more mobile video ad companies are disabling the native back button, which is skirting the edge of ethical in the advertising world.

You could always turn the videos off — there’s an easy-to-find switch — but the programmers are going to come up with another horrible obstacle in a couple of months, and you’ll need them. The pins and needles when you get up from the toilet***** will be worth it. 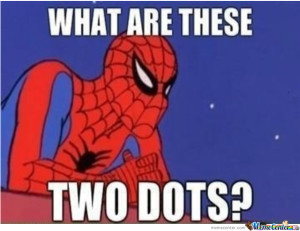 * We received no money from the developers to talk about this game. I’m just doing it because six parts of it are really frustrating.

*** What good are casual games if not for playing while pooping at work?

**** Officially called “nesting dots”, these are balls that, if you match three times next to them, they turn into bombs. Calling them balls is funnier.