I am a homeowner. It is a lot harder than you might think, if you’ve never been one. Stuff breaks all the time, and unlike when you’re renting an apartment you have no one to fix it for you. And it’s expensive.

Now, obviously, breaking a window, a wall, an exterior door, or a floor is a major problem, but it’s rare that those things break and you think “I can just take care of that later.” But you shouldn’t. You’ll regret it. Don’t think so? Well, here are six of the worst things you can mess up in your house (that will have a much bigger impact than you think). 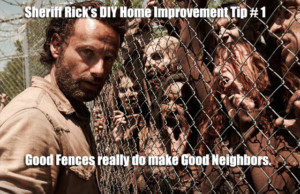 Fair warning: some of the images in this post contain adult language.

6. Garbage Disposal — If you’ve ever had a garbage disposal break, you will never again take it for granted. It’s amazing how you can just let food go down the drain, flip a switch, and it’s ground up into tiny chunks and sent right down the tubes into the sewer. (Or wherever your wastewater goes if you don’t have a sewer — I know toilets go to a septic tank, but what about sinks?) They’re not expensive — you can get one for under $100 — but given what goes down them, think about how horrible it would be to have to replace it. You need to get the old one out, catch all the yuck, clean everything, put in the new one, and then try not to break it (again).

There, I fixed it! We don’t have a garbage disposal in our sink at work, but people persist in trying to put food down the drain anyway. Someone — I don’t know who — “solved” the problem by putting up a sign that warned coworkers: “NO GARGAGE DEPOSAL HERE”. Worked perfectly. Not. 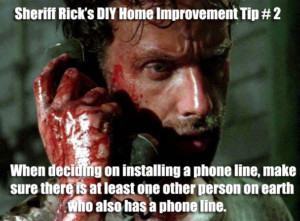 5. Toilet Innards — Leaky toilets can lead to annoyance, not only with your water bill but with your hearing. Dripping, running water, difficulty flushing… and it costs maybe twenty bucks to fix it. Turn off the water, empty the tank, follow the rest of the directions on the package, and you’re done. It’s so easy even I can do it.

There, I fixed it! However, the previous owners of my house decided to “fix” the floater in the downstairs toilet tank by duct-taping it to the arm. So when the flush handle snapped off and I tried to replace it, I discovered the floater was no longer connect-able, so I went out and bought the parts to fix it… and they had puttied the toilet innards to the tank. My options then were to call a plumber to get it off, or replace the tank. The plumber cost less, surprisingly. 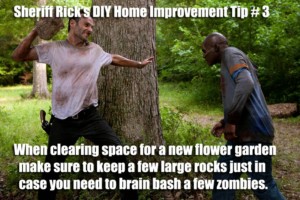 4. Garage Doors — Parking in a garage is amazing. You don’t get rained on, your car isn’t beholden to the elements, and you can leave belongings in it without them being easily seen by potential thieves. So when your garage door stops working, you want to get that fixed pronto. Fortunately, garage doors are not exceptionally complicated pieces of machinery — there are tracks, wheels, gears, and a little electricity. But even without those, as long as the doors go up and down you can move them by hand. You’ll get spoiled, and then you’ll get mad when you don’t have that little luxury.

There, I fixed it! The other problem with garage doors is that because they’re so big people assume they’re hard to fix. It’s not easy — you have to make sure the tracks are straight, the doors are functional, and the opener is mounted to the ceiling. But if you don’t fix it, you’re going to end up using your garage as a storage room. At my old house, the opener on one of the doors died after a year and it never got fixed. Up until I moved, the garage was nothing but a place to pile crap that I didn’t need. I’ve been very careful about that at my new house — there’s room for two cars (my wife doesn’t park in it) — but it’s a constant battle.

3. Door Seals — If you properly seal your exterior doors, you’ll keep the cold out in winter and the heat out in summer. If you have big rooms, it’s already a pain in the wallet to keep them cool or warm, and it’s even worse if you have trees that block the sun (speaking from experience). It doesn’t take long to put in some weather stripping, and it’s really not expensive. Also, a good seal helps keeps bugs out.

There, I fixed it! This isn’t actually fixed, per se, but the door from my house to my garage is a good quarter-inch off the floor. Which is fine for interior doors, but exterior ones? And yet even though I have the weather-stripping I’ve just been too lazy to put it on. I really should get on that. 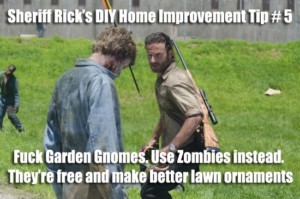 2. Wobbly Shelves — Installing shelves is pretty easy — drill, screw, mount, done. Unfortunately, I’ve found that almost everywhere I’ve lived doesn’t have correctly-centered studs (the pieces of wood in the wall that you’re supposed to use as an anchor for shelves and pictures). So, which is worse? Poorly-hung shelves that might fall, or off-center shelves that look weird? I for one prefer shelves that can actually hold things.

There, I fixed it! Several years ago I was asked to put up some shelves. They were floating shelves — that is, shelves without visible brackets. A cool idea, but again we ran into the problem of studs that aren’t centered. I put them up anyway — what’s the worst that could happen? — and while they are still up on the wall, they’re very slanted and I’m amazed things haven’t come tumbling down yet. Learn from my example: find a stud. 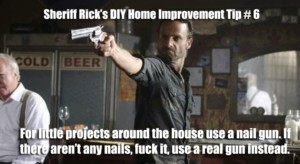 1. A Leafy Yard — Trees are amazing. I love trees. They provide shade, and sometimes fruit, and they look nice. But I also live in a place where there’s four seasons, and the trees in my front yard are very much deciduous. That means there’s leaves. Lots and lots and lots of leaves. More leaves than you might think three trees could possibly shed on less than 1000 square feet of yard. I had to clear the driveway every week or so last fall just to make sure we could see where we were going, and I probably should have been doing the yard, too. But I didn’t.

There, I fixed it! It should be possible to just do all the leaves in one weekend, right? Rake, scoop, bag, repeat. But it took me three weekends, and by the time I was “done” I had more than twenty bags… and I didn’t even finish the job. There were just too many leaves, and every time I thought I was making progress the wind would blow and there would suddenly be even more. Of course, now it’s spring and my yard is covered with last fall’s leaves, because I didn’t keep up with them every week like I should have. Now I have to call a lawn guy to solve the problem — which, I mean, yeah, I can afford it, but it’s my own damn fault that I’m in this predicament. 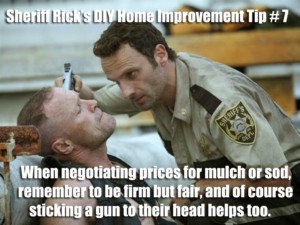 I realize this column isn’t especially nerdy, but hey, nerds own houses, right? And fixing things, while not always a nerdy pastime, is important. We can’t always pay someone else to do the job.

I have fixed a lot of stuff at my house, though. I installed a thermostat (which had incorrect instructions, so it didn’t work until an A/C guy came out and fixed it). I replaced a shower head (which was electrical-taped to the pipe for some reason). I half-replaced the innards of a toilet (see item 5 above). I mowed my lawn a few times (very, very few). I even replaced some light switches with dimmers (although since our fuse box is labeled so badly I had to turn off power to the entire house to do it).

Oh, let’s face it. I suck at home improvement. If only I took care of stuff when it happened, half the problems wouldn’t be problems. So remember: nerds love to procrastinate. When it comes to your house… don’t. Trust me. 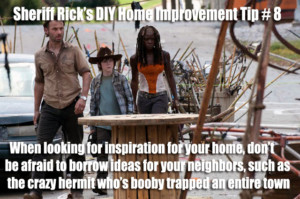 Coming soon in paperback! Space travel, steampunk Seattle, superheroes, and more. (But no zombies.) Check out Josh’s collection, The Clockwork Russian and Other Stories, which has been called “intelligent, compelling, and always entertaining” by award-winning author Sean McMullen, and “clever, thought-provoking, and occasionally unsettling in all the best ways” by award-winning author Andy Martello. Get your copy today!