SIX OF THE WORST… things about pooping at work

SIX OF THE WORST… things about pooping at work

Pooping at home is great. You have your own bathroom, your own toilet paper, no one comes in to bother you (unless you have small children), and you can take pretty much as long as you want. 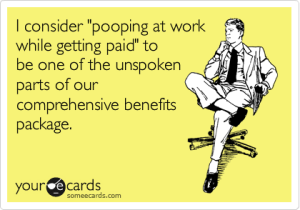 Unfortunately, we can’t always poop at home. Sometimes we have to brave public bathrooms at restaurants or stores, in which case we do the best we can and get out as quickly as possible. But other times we have to poop at work. I mean, we spend about 40 hours there each week; it’s like a home away from home, right?

Anyway, here are six of the worst things about pooping at work.

6. Environmental Control — Some office buildings have luxury poopatoriums — large rooms with full-height doors and plenty of light. Most of us don’t work at places like that, though. Most of us work at retail stores, or schools, or office buildings with (forgive me) crappier crappers. They’re cramped, or cold, or hot; they’re noisy, or have music (or worse) playing over the speakers. It’s discomfiting.

How about an example? Okay. When I worked overnights at a radio station, sometimes the urge came upon me to spend some time in the bathroom staring at the back of the stall door. Well, the station has speakers in the bathroom so you can hear what’s going on on your station. Problem is, there were three stations in the building (and, after our expansion, six). And once you’re seated, you can’t very well get up, change the station, and go back. And this was the early 2000s, so I was reading books, not playing phone games. Some people brought handheld radios into the bathroom with them, but I just hoped for the best. The nice thing about talk radio is that it’s more or less on a regular schedule, so you can plan your poops. 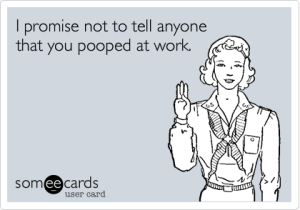 5. Smell — It’s a bathroom. It smells strongly — either like what people do or what others do to keep it clean. And because you’re usually in a stall situation where there’s nothing physically blocking other people’s emanations, you’re subject to whatever everyone else is doing. And you’re trapped until you’re done with your own business, however long that may take.

How about an example? On the plus side, if you think farts are funny, everyone can hear them. Just don’t laugh too loudly. 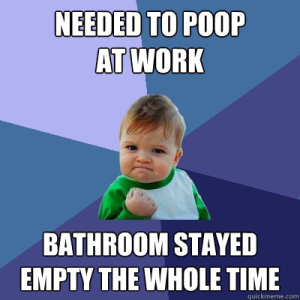 4. Other People — Unless you have a love toilet, there’s only one toilet in your bathroom at home. If you’re lucky, there’s only one at work, too. But most people aren’t lucky. Not only do you know that there’s someone in the next stall doing exactly what you’re doing, but you also know that you’re only a few feet away. Yeah, in my apartment my toilet is back-to-back with my daughter’s, but there’s a wall between us. I can pretend I don’t know. Unfortunately, in many work poop situations you know who is in the next stall, or at least what they’re doing.

How about an example? I was in a stall recently, doing my thing, when some other dude stomped in, threw the other stall door open, slammed it shut, and flung the seat down hard enough to actually scare the shit out of me*. Insult to injury, the guy exploded. 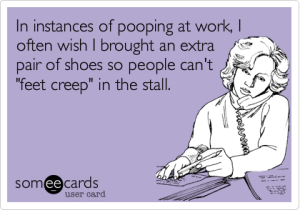 3. Empty Chairs and Empty Tables — This one isn’t so much about the bathroom, but let’s be realistic here: pooping takes a minimum of five minutes, right? And often a little bit longer — or a lot, if you have a really compelling game to play on your phone. Your coworkers are going to know where you’ve gone (especially if your phone isn’t on your desk anymore, or if they see you carrying your tablet as you walk the halls). It’s pretty clear where you’re going, what you’re doing, and how long you’ll be. At least most people just ignore the knowledge and move on.

How about an example? Some people** have tender stomachs (or health problems) and must poop at work more than once per day, every day. When you work in an office with one other person, and you disappear for 15-30 minutes in the morning and another 15-30 minutes in the afternoon, it’s pretty obvious what you’re doing and about how much you’re costing the company. There’s a calculator, if you’re interested. I get paid about $3740 to poop each year. 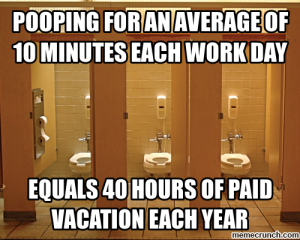 2. Toilet Paper — You thought this would be number one, didn’t you? Well, it’s not. But it is a problem. After some experimentation, my partner and I agreed on a toilet paper we both like. Unfortunately, most businesses don’t use very pleasant toilet paper. Even the most high-rise office building is likely stocked with Scott One-Ply Butt Sandpaper (which, by the way, is actually sold in grocery stores, although not under that name). It doesn’t tear neatly, it’s thin, it’s not as wide as home-style toilet paper, it’s uncomfortable, and if you’re a woman you have to use it every time you go, instead of just for poops. It’s possible, I suppose, to bring some wipes in with you, but I always forget. Oh, and the janitors usually put it on backward. At least they (hopefully) do a good job of keeping it full.

How about an example? For five months in 2003, part of my job at the Office Depot where I worked part-time was to clean the bathrooms. I got to choose the toilet paper I used in the stalls, and to everyone who worked at the old Office Depot in Altamonte Springs, FL (it’s closed/moved now), you’re welcome. It was the good stuff. 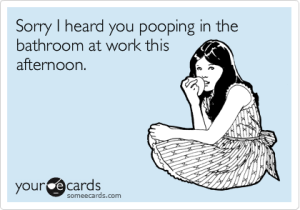 1. Lights — In an effort to save money on electricity, many companies use automatic lights. They turn on when you go into the bathroom and turn off when you leave. Usually there’s an extra always-on bulb… but sometimes there’s not. And when you’re trapped in a stall, you can’t exactly trigger the sensor.

How about an example? In 2004, I had just gotten a new job, and I didn’t know the bathroom lights turned off after only eight minutes. I was reading, minding my own business, and ~snip~ off go the lights. It was literally pitch-black in there, and since this was 2004 my phone didn’t have a flashlight. It was just a simple little Nextel with a black-and-green screen. I literally didn’t know what to do. I ended up panicking and sending a T9 text message to a coworker (who was also a poop friend) and he came in and triggered the light for me. This caught me again a few weeks ago at my current job, but at least there the building crew has pointed the sensors in such a way that I can just wave my arms and the lights come back on. Thank goodness. 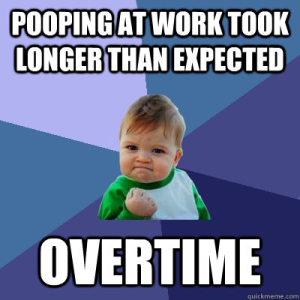