SIX OF THE WORST… things about birthdays

SIX OF THE WORST… things about birthdays

My birthday is this month (as is our esteemed editor’s, as it happens). I’m not looking forward to it. In fact, for the past several years, I haven’t looked forward to my birthday. It’s just… not a thing anymore. Here are six reasons why:

6. Canned responses — I always shut my Facebook wall off for the two weeks surrounding my birthday. I don’t want birthday messages from people who Facebook reminds but who don’t think of my existence the other 364 days of the year. It’s not their fault that they don’t; of the almost-500 “friends” I have on Facebook, maybe 300 are people who I only talk to once or twice a year, if that. Don’t tell me “happy birthday” out of obligation; it just makes me feel worse.

It’s kind of a funny story… Even when my wall is shut off, people find ways to use Facebook to say happy birthday. My mom puts it on her wall, for example, and tags me. But others just use direct messages. As you’ll see at the end of this post. 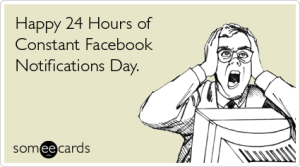 5. Presents — I admit that I’m pretty easy to shop for: board games, Amazon/Google gift cards, and cash are all welcome (and I do have an Amazon Wishlist if you’re interested). I also like humorous t-shirts. But not everyone is as simple as I am when it comes to presents. For example, there’s someone in my family who’s almost impossible to shop for. She doesn’t have a ton of hobbies, she already owns (or has the means to purchase) all the things she wants/needs, and twice a year (her birthday and the holidays) I rack my brain trying to figure out what to get her.

It’s kind of a funny story… Sometimes I’ll accidentally buy an extra birthday card and stick it in a drawer to use for later. One of my best friends had a birthday on March 17, and one of my grandmothers on March 25. I asked my partner to pick up a card for my grandmother, thinking to use the saved card for my friend. She happened to pick up the exact same card (it had a dog on it and was quite appropriate for all recipients). Quite an amusing coincidence; a good laugh was had by all.

4. Singing at restaurants — It’s not cool. Not ever. Not even when you’re a child. There’s a funny picture on my Facebook of my best friend’s 17th birthday dinner where they’re taking a picture of him after singing and he’s making the grumpiest face ever. Birthday deals are great, but if you’re going out to dinner on or near your birthday you’d better make sure nobody leaves the table for any reason, lest a bunch of folks come over and start clapping and chanting a ridiculous birthday rhyme.

It’s kind of a funny story… This isn’t really birthday related, but one time my parents and I went to this seafood place for dinner — I want to say it was Joe’s Crab Shack but I don’t quite recall — and we couldn’t get any service right around the top of the hour. It turns out all the servers were forced to do a coordinated dance routine at the top of every hour, and most of them looked so put-upon, like, “just let me do my damn job! This is cutting into my tips!” Especially our waitress; she looked like she wanted to kill somebody. 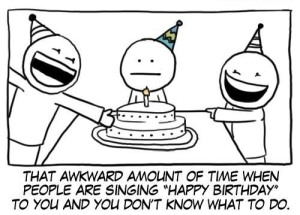 3. How do you top this? — If you’re in a relationship, you want to make your partner’s birthday special. It shows you’re thinking about the other person, considering what s/he likes, and then doing something fun, or interesting, or exciting, or cool, related to the other person’s interests. After all, one of the best birthday presents is memories — memories of something you did together that made you both happy. But if you’re not careful you’ll find yourself in a mutually-assured-destruction situation as you both try to do just that little bit more for each other to make each birthday better. It can lead to a lot of frustration and worry.

It’s kind of a funny story… Before I was married, my ex-wife and I celebrated a day in January as our anniversary, because it was the day we had met. On our fifth anniversary, I wanted to do something really awesome for her, so I got her tickets to see Neil Diamond, one of her favorite musicians (it wasn’t a hardship; I also enjoy his music in moderation). The pair cost about $150, and I thought I had the best gift. Then she gave me an entirely new entertainment system — receiver, speakers, and five-disc CD changer. I liked the presents, but I felt a bit miffed at being outdone.

2. Parties — I have an eight-year-old, and that means I have to throw her a party every other year (according to the divorce papers, we swap years). It’s not ridiculously expensive to throw the actual party — $200 to $300 at a party place — but that doesn’t include invitations (thank goodness evite is universally accepted), party favors, cake, snacks, drinks, grown-up snacks, thank you cards, and all the time and energy it takes to corral about twenty kids plus a few parents plus the emotional energy of dealing with my ex and her parents too. At least on even-numbered years all I have to do is show up.

It’s kind of a funny story… My 30th birthday was the day one of my fraternity brothers got married, so my parents threw me a party the day before. Complete with a rather amusing cake that I’m certain my sister was the mastermind behind: 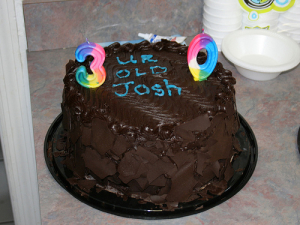 1. I’m old — I’m turning 37 this month. Which isn’t that old, but I’m not young anymore. I creak, I ache, my hair (what hasn’t fallen out) is turning gray, my beard is getting white patches, I can’t stop eating, I can’t exercise, and I’m losing my memory (as I mentioned last month). Next year is my 20-year high school reunion, and I’ll be 40 in three years. When I was a kid, I couldn’t wait to grow up, but now I just can’t even. I have maybe 30-35 good years left, and another 10 on top of that where I’ll just be good for grandpa duty (if my daughter chooses to have children). Hopefully I’ll have saved up enough money to live comfortably (not in a rich way, just, like, a small condo and enough money to have internet and food), but my child support bills are ridiculous so I can only barely contribute to my retirement fund.

It’s kind of a funny story… No it’s not. I hate my birthday.

Well, that’s not entirely true. My partner did a great job on my birthday last year (my first one where we were together): dinner at one of my favorite restaurants, a shopping spree in one of those gourmet popcorn stores, and then we went out for the evening and did some other fun stuff. The next day, one of my best friends had me and my daughter over for dinner. It was a pretty good birthday.

It’s just the concept of birthdays that I don’t like.

I went back through my Facebook DMs and found some folks who send the exact same message every year. Enjoy! 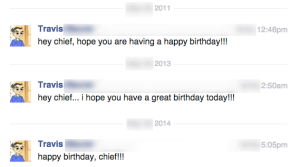 Probably because, in 2012, I was not worthy of boldface… 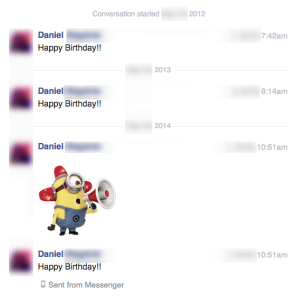 And my very favorite… this is one of my cousins, who sends the same message every year. Good job, sir… 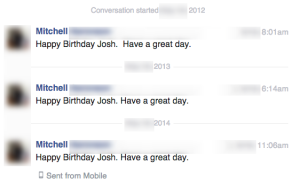