I already have my plans made to see The Force Awakens. I’ll be going on the Saturday or Sunday after it releases, if you’re interested. And, as befits my status as “guy who writes lists of six things” as well as the remarkable convenience that there are currently six Star Wars films, I’m going to take a look at what I think was the worst part of each one, and how it could have been fixed. Now, this isn’t a list of which one is worst in order (I’m doing them chronologically), so don’t assume that I think Jedi is the best. (But I did used to think that. In the dark times. Before the Empire.) 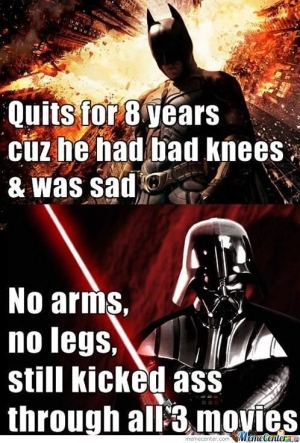 6. The Phantom Menace — I know everyone’s going to immediately point to Jar-Jar Binks as the worst part of this movie, but new evidence has come to light that he might actually have been hiding his true intentions the whole time. Instead, I want to focus on the midichlorians — you know, the powerhouse of the Jedi cell. Have all the midichlorian detectors disappeared in the 20 years between Sith and Hope? Do med-bots not know how to do this?

Maybe they should have… …gone with the tried-and-true “Jedi can sense other Jedi in the area” method. If Jedi were really supposed to be the source of balance and order in the galaxy, then it would only make sense that they would go to most of the explored planets, right? I would’ve had Jedi whose specialty is seeking out others. Keep the Force mystical, not biological. 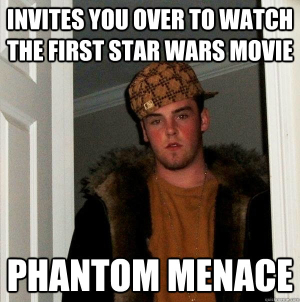 5. Attack of the Clones — As with many films, the first time I saw this one I actually rather liked it, but on rewatch I saw all the problems. No CG lightsaber fight between Yoda and Count Dooku can overcome that. What really killed the movie for me was the stilted, forced romance between Anakin and Padme. It hurt so much to watch, and even now that’s when I go to the bathroom during the film. Runpee didn’t exist when this came out (as far as I know), but if it did, I bet the romance scenes would be the peetimes.

Maybe they should have… …oh, I don’t know, done anything else. Maybe hired a competent romantic drama writer to sub in the lines for Anakin and Padme? Maybe started Anakin down the dark path earlier so he could subtly manipulate Padme into being with him? I truly have no idea how to make that part of the story better than it was, other than get rid of it entirely. 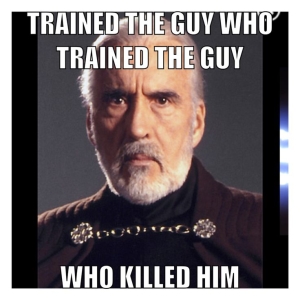 4. Revenge of the Sith — A lot of stuff got crammed into this movie, and outside of expanding everything to make it more of a slow burn, I’d really like to have not seen Darth Vader go all Frankenstein’s Monster at the end. He looked like I do on the Godzilla machine at the gym.

Maybe they should have… …found a way to make the reveal to Anakin of what he was a little slower and less cartoony. And spent more time with the Wookiees. 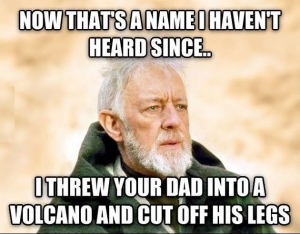 3. A New Hope — Y’know, I’ve always thought that the Death Star was kind of ridiculous. There were almost 1.2 million people on that ship, as well as more than 7000 fighter craft and 10,000 laser blasters. And yet somehow the rebels managed to destroy it with a couple of wings of fighters. That speaks to a massive level of mismanagement by Grand Moff Tarkin.

Maybe they should have… …used Star Destroyers. Each one holds about 45,000 people (although at only 1600 meters long, one wonders just how much personal space each person got), and the Empire could easily have laid waste to Yavin (and, for that matter, Alderaan) with only a dozen. I mean, the rebellion didn’t have a ton of capital ships — at least, none that we really saw until Jedi — and I’m fairly certain they could’ve taken down a rebel base with five Star Destroyers. Instead they somehow managed to get beaten by a couple dozen fighters. If I had been the emperor, Darth Vader would’ve been force-lightninged to death long before Empire. 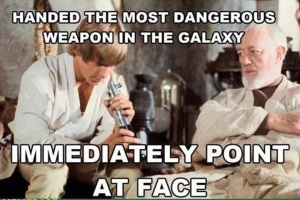 2. The Empire Strikes Back — Given that we saw Luke, Wedge, and the rest of the Rebellion fighting in one-person craft, it seems silly that the ships on Hoth required two people. It could be argued that the ships on Hoth were older and less automated, but even forty years prior, on Naboo, the fighter craft only had one crewperson apiece.

Maybe they should have… …thought about the fact that the empire has AT-AT walkers — possibly the slowest, dumbest mode of ground attack in the history of Star Wars, despite how cool and scary they looked, and planned ahead. The ion cannon was a nice touch, but ultimately Hoth was a base that was doomed to die, and the moment the Empire showed up, they should’ve focused everything on evacuating, not stopping the walkers. 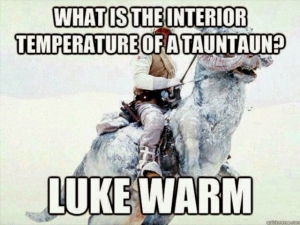 1. Return of the Jedi — Ewoks, man. Look, I’m all for using the indigenous peoples to help in your cause, but what had the Empire done to the Ewoks? They didn’t seem to be hurting them or hunting them; they just plunked a base down on the ground, probably put up a forcefield (so a few Ewoks might have gotten zapped), and gone about their business. Why did the Ewoks want to help? Just because C-3PO told them a story about the evil Empire? And if that’s the case, did the Ewoks have all these huge traps already laid or did they work through the night before the attack on the shield installation? (And I’m sorry, but it’s pretty dumb to have your poorly-manned, poorly-guarded shield installation down on the planet. There had to be some starships that could’ve held the line.)

Maybe they should have… …not had Ewoks in the movie. Or at least not have made them the one thing that takes down the Empire. And, on that note, did they take down the Empire? Did the Empire self-destruct when the Emperor died? How did the news get out? How did it happen so fast? And were the people of Coruscant really that thrilled? I mean, for the average citizen, was the Empire really that bad? We don’t actually know. (At least, if we watched the movie we don’t. I’m not counting the EU here.) 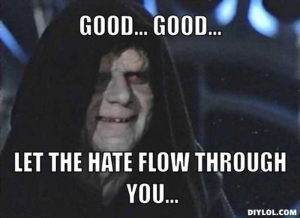 I was recently introduced to The Blackened Mantle. Someone took all three prequel films, re-cut them into a much better story, removed all the crap (like the pod-race, most of the love scenes, Geonosis, most of the droid factory, and Jar-Jar Binks), had them performed in Japanese, and then subtitled them. It’s genius, because then you don’t read the lips, you read the subtitles. The film, which is almost three hours long, gives Darth Maul and General Grievous a much more logical (and satisfying) through-line, eliminates the “Padme died of a broken heart” garbage, and really nails the Anakin-vs-Obi-Wan rivalry as well as deepening the Palpatine storyline. You may never watch the “original” prequels again. 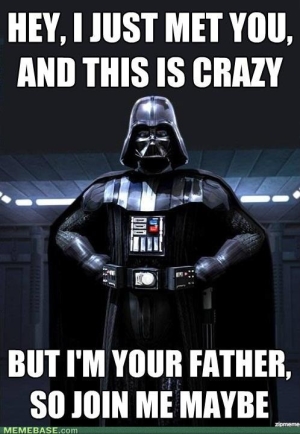