Last week, ESPN published an article (that will appear in the September 28 issue of their magazine) detailing the depth to which the NFL and the New England Patriots have hidden their anti-competitive activities. Now, whether or not you believe this is “business as usual” or you believe “the Patriots need to be run out of the NFL on a rail”, there’s definitely something going on in the league that needs to be addressed. 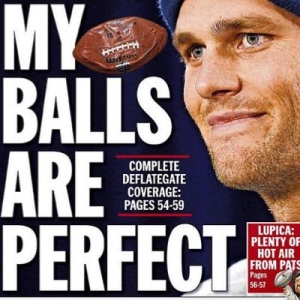 But we’re nerds. To many of us, football and the NFL are merely a way for us to play fantasy games and apply our mathematical and statistics/probability knowledge in hopes of defeating our friends who, say, pick Drew Brees in the first round because they love the Saints.

However, as nerds, we usually abhor cheating when we’re part of a contest (unless the game calls for cheating as part of the play itself). We think that victories won by cheating are hollow and tainted, and we’re not alone. We don’t allow it in our games and contests, and when we do, we need to deal with the cheaters.

So here are six of the best ways to do that… and, because I’m a huge football fan, how they’d affect the NFL if they were applied to the Patriots. 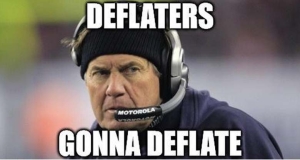 6. Throw the bums out. — What do you do when you see that someone is cheating? You ask them to leave the game. Whether it’s using some sort of performance-enhancing drug, or a cheat code, or collusion (which I’ll address later), it makes the game unfair for everyone. I mean, what’s the point of playing if there’s no chance to win it because another player has an unfair advantage?

Eliminate the Patriots franchise. According to the ESPN article, many members of the Patriots organization, including coaches, officials, and even players, were aware that cheating was occurring. So you can’t just ban Bill Belichick and Robert Kraft from football. But you’d be putting plenty of innocent people out of work, too — not just players and minor functionaries, but also all the folks who make their livelihood because of Patriots games, such as Gillette Stadium employees and the makers and sellers of apparel. Plus, there’s history there: for many decades prior to the Kraft/Belichick/Brady era, the Patriots have been a member of the NFL and completely blameless. It would be like saying Danny Almonte‘s entire family couldn’t ever be associated with baseball because he cheated. 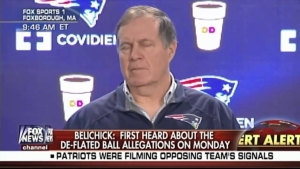 5. Suspend the cheaters. — It’s virtually impossible to ban someone from playing Settlers of Catan ever again just because there was the illegal filching of a resource card or two. So instead you tell them “you’re out of the tournament, and we’ll be watching you extra carefully next time”. The same with professional video gamers, and even RPG players who exploit tiny loopholes in the rules (or DMs who do the same). Draconian discipline (eliminating the cheater permanently) is all well and good, but if the cheater is someone famous, there’s money to be lost by said cheater not ever playing in a tournament again.

Suspend the Patriots. This almost happened with Deflategate — which, even if you’re not a football fan, you have to have heard of. But a judge overturned the Tom Brady suspension in the end, and he played last Thursday night. Plus, how can you suspend every member of the team and staff who knows about the cheating? So you suspend the entire franchise for the year — the AFC East only has three teams, the NFL schedulers make changes so that if a team was playing the Patriots they’re now playing a non-conference game, and then the Patriots (players and officials) don’t get to meet, draft, or engage in any team-like behavior until OTAs begin the next summer. It would send a hell of a message, especially if everyone was suspended without pay, but again, some people who are totally blameless (like the receptionists, janitors, scoreboard operators, etc) would lose their livelihood for a year. Again, unfair to penalize everyone for the actions of a few… but who are those few? 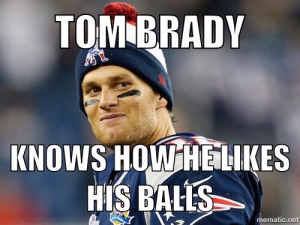 4. Take away the victory. — In many competitive sports, victories add up and bring you or your team closer to a championship game. If you cheat in a Scrabble tournament, and you win because of it, then it does taint the entire tournament but the point is that it’s in the past. The organizers can’t go back and re-run the entire thing. But they can strip you of your victory and award it to the person you defeated via your cheating, and they can request you return the prizes. That would taint you for the rest of your days, and might affect you being invited to join competitions in the future.

Take away the Patriots’ victory. This was bandied about after Deflategate happened, but ultimately nothing came of it. There was more to the Colts’ loss than the pressure of the footballs — to wit, they committed pooch-screwage in the AFC championship game last winter. And, hell, other high-profile QBs like to change the PSI of their balls too. If their victory had been taken away, though, would the NFL have put the Colts into the Superbowl? Would the Seahawks then have won*? Would the game have been less exciting? No one knows, and no one will know. And the NFL isn’t going to take away anyone’s victory. Too much money and prestige on the line. 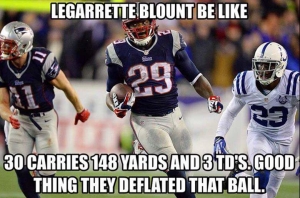 3. Improve the anti-cheating measures. — The cheating may have already happened. The tournament may have ended. Punishments may have been handed down. But how do we stop this in the future? Do we declare that each game of Catan will have a dedicated banker who’s not playing that round? Do we computerize the Scrabble boards so players can’t play words unchallenged by their opponents (because the computer will do it for them)? Do we test every video gamer for performance-enhancing drugs before every match? Whatever the tournament organizers do, it will take money, time, effort, and training. I mean, look what happened when we implemented the TSA, right?

Make it harder for all teams to cheat. After Spygate, in which the Jets did a sting operation to catch the Patriots taping their defensive signals, new rules were handed down by the NFL to prevent this sort of thing. They affected all teams, but the rules pretty much called out exactly what the Patriots were doing. According to the ESPN article, the Patriots have simply continued to cheat, just in new ways. It’s become a war of escalation: find a way to block the cheaters, and the cheaters will find new ways to cheat. The same thing happens in every industry, competitive or not — I mean, have you seen some of the BS happening to get around ad blockers? 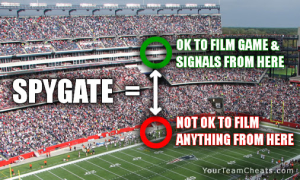 2. Put someone new in charge. — If a tournament or event is clearly corrupt, the main options are to not participate, to find another tournament, or to start your own. But if enough participants are like “hey, what the hell!”, maybe you can get a new person put in charge. Bring in an outsider, or get someone who loves the game (and doesn’t cheat) to take over. Get someone everyone approves of, or at least doesn’t hate, and hopefully things will improve.

Replace Roger Goodell. In the past few years, NFL Commissioner Roger Goodell has made some disciplinary decisions that have pissed off a lot of people. They’ve sometimes been arbitrary, and they’ve sometimes been ticky-tack. But then, last year, the poo hit the fan. Ray Rice was indicted for assaulting his fiancee, and Adrian Peterson was accused of abusing his child via corporal punishment. Initially, Rice was given a two-game suspension (whereas some folks who used performance-enhancing drugs got a four-gamer and receiver Josh Gordon was kicked out for a year for using marijuana), which eventually became an indefinite ban. Peterson was suspended by the NFL for the season, and reinstated to the Vikings; Rice still isn’t playing. People who don’t give a damn about the NFL have figured out that Goodell is getting it wrong, over and over, and if he’s found out to have covered up cheating for as long as he has, he has to go. The thing is, Goodell is also helping the 32 team owners make a crapload of money, and if there’s one thing rich people hate, it’s getting rid someone who makes them more money every year. 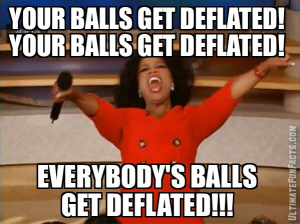 1. Protest. — Let’s say you’ve done everything you can to speak out against the cheating party. Let’s say you’ve tried all the recourses available to you. What do you do? Well, you could strike, as happened in the NFL in 1982. You could quit. Or you could protest — peacefully, by simply sitting down in front of the tournament location and making your demands known politely and reasonably. (It helps if your demands are reasonable.) Protests actually do work sometimes, and they certainly draw media attention.

Protest peacefully when your team faces the Patriots. I had this idea when I started writing this column: what would happen if the teams facing the Patriots just chose not to play? And I’m not talking about just not showing up; I’m talking about suiting up, and then when it’s time to play, don’t do anything. The defense would stand there and not defend against Patriots players; the offense would simply kneel down on every play. Not only would it be the biggest news story in the NFL since… well… probably ever**, but it could conceivably shame the Patriots players into not playing either. Imagine the Patriots having a record of 0-0-16, and all the teams playing against them getting a tie instead of a win or loss. Or, worse, imagine what would happen if Belichick forced his players to play for real? Even if it was just “kick a field goal so we win, and don’t do anything else”, it would cheapen the entire NFL season and possibly eliminate the league as a whole. Now that’s an effective protest.

Speaking of the Patriots, several years ago there was a game in Foxboro against the Dolphins in the dead of winter. I don’t remember who won (I’m pretty sure it was the Patriots), but I do remember that, due to a timekeeping error of some sort, more than half an hour after the game ended a bunch of players and officials had to come back on the field to play one more down. I think it was because the score was close enough that a crazy-ass turnover might have given the Dolphins a chance to win, but realistically all the Patriots had to do was kneel down one more time. Half the players were already in the showers, and they all came out, freezing and miserable, to finish the game.

According to the rules. 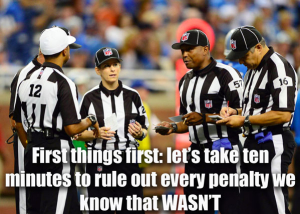 * They would’ve won if they’d just run the ball at the goal line, but that’s another story.

** With the exception of Nipplegate, which ruined the legacy of an otherwise-awesome Superbowl.