In the beginning, I was leery about Supergirl (the new CBS show). It wasn’t being made by the people who make the other DC Televised Universe (DCTU) shows, and it wasn’t going to be connected to the DC Cinematic Universe (DCCU) films, so what was that going to mean for her in regard to that?

But I figured I would give the show a chance. I mean, Superman is my favorite DC comics character (followed closely by Martian Manhunter), and the fact that Supergirl was going to have nothing to do with Man of Steel was pleasing to me because that meant (hopefully) it wouldn’t have the dark overtones of the DCCU. 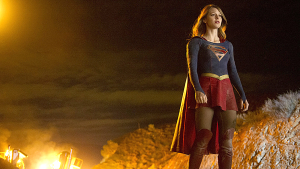 As of this writing, I’ve seen through the earthquake episode, and I think that’s enough for me to talk about six of the best things I would change about a show that, honestly, I like quite a bit.

Warning: spoilers through the episode with Jemm and the earthquake.

6. Define which universe we’re in. — From the first episode, I’ve been wondering exactly which DC universe we’re in. If it’s not DCTU or DCCU, and it’s definitely not Man of Steel, then which is it? Is it the Reeve-verse? The Bryan Singer-verse? The Smallville-verse? The “Death of Superman” verse? The comics? I have no idea (though I’m pretty sure the showrunners are going to go with DCTU in the end). It doesn’t matter so much to the casual watchers or the CBS audience, but to the comic nerds in the crowd, it is important to know. I would like to have known up-front.

What I would do is… …show us a picture of Superman doing something that would give us a touchstone to one of those universes. Or at least give us some good context clues. Personally, I would’ve adapted the Singer-verse and said Supergirl showed her powers during the five years that Superman was away on Krypton, investigating. Then we wouldn’t have had the specter of “Superman is still in Metropolis and he’s better than Supergirl” hanging over our heads. If Superman wasn’t around, it would make things easier for Supergirl. 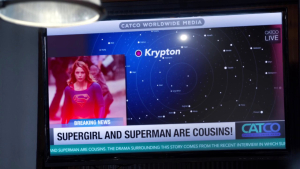 5. Lose the love triangle. — While romantic elements are important to the Superman story, from what I know of Supergirl they’re somewhat less so*. I don’t mind Supergirl/Kara pursuing a relationship, but what I do mind is the generic way it’s been set up: she’s in love with Jimmy, who is getting back together with his old girlfriend, while Winn the IT guy is in love with Kara and is getting grumpy because he’s in the Gale-zone**. This has been done to death, and I and the viewers are sick of it. It’s not cute anymore.

What I would do is… …either put her definitively with Jimmy, put her definitively with Winn, or — how about this — put her with no one. She doesn’t have time for a relationship right now, and that would be a great point of conflict between her and her sister — and even her and Jimmy and Winn, if they said “you need to save the city, not be looking for LUUUURVE.” Then, maybe, she could have a secret boyfriend. (Or girlfriend. Whatever.) 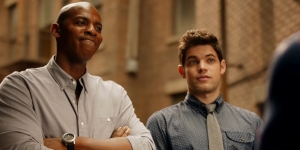 4. The names. Oh, the names. — I understand that the DC comics (and Marvel, too) love alliterative names. J’onn J’onzz, Lois Lane, Lana Lang, Cat Grant (alliterative in reverse), etc; they’re all canon. But the name of the city where Supergirl lives is possibly the lamest one I’ve heard since “Star City”. I mean… National City? Sounds like the home of a car rental company.

What I would do is… …first of all, make it easier for us to grok that National City is Los Angeles. I mean, Metropolis is clearly New York City (although I’ve always been of a mind that it’s actually Chicago, based on some Superman books I read growing up); show us something that makes us think it’s LA — like, maybe the National City Tar Pits, or Kent Memorial Pier at Santa Monica. I dunno. And then give the characters and places some realistic names. Fort Rozz sounds dumb, and I can’t think of Jemm without thinking of the Holograms. 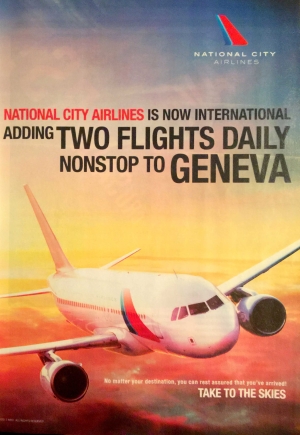 3. Stop trying so hard to copy everything Superman did. — Clark is a reporter; Kara works for a media conglomerate. Superman has a confidant who’s a photographer; Kara has the same. Clark wears glasses to hide his identity; Kara does too. Clark learned from a hologram of his father; Kara from a hologram of her mother. In the various universes of DC comics, it’s ridiculously easy to hide one’s identity — in real life, if you wore a domino mask to work everyone would know who you are, and when I take my glasses off everyone still knows it’s me no matter what I’m wearing — but we don’t have to do everything Superman did. (That said, I really liked the parallels between the Superman origin story and Supergirl saving the plane in her street clothes.)

What I would do is… …give Supergirl more of an identity than “Superman’s cousin who has all the same powers he does”. I don’t really know how you could do that, especially when you’re on CBS and have to pander to that audience (I mean, have you seen what they’re doing on CSI: We’ll Make You Believe Patricia Arquette Leads A Group Of Hackers And James Van Der Beek Is An Action Hero?), and the source material is somewhat limiting, but given what Zach Snyder did to Superman, I’m sure Greg Berlanti could have some fun with Supergirl without losing who the character is and what she means. 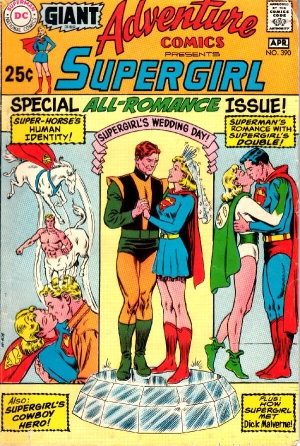 I think I actually read this issue.

2. Stop being “almost Superman”. — So far the show has Jimmy Olsen, Lucy and Sam Lane, Cat Grant, Reactron, and now the Martian Manhunter. They’re basically making Supergirl along with Superman’s Friends, instead of giving Supergirl her own people. Yes, she has Winn and her sister, but beyond that, who is there that’s wholly from the Supergirl universe? Maxwell Lord? He’s basically Lex Luthor, but then, from what I know of the comics, that’s who he’s supposed to be.

What I would do is… …find some story arcs in the Supergirl comics that don’t require characters from Superman. Look, I get it, CBS is trying to associate the show with Superman, and I do like the casting choices they’ve made — Calista Flockhart is a great upgrade over Keri Lynn Pratt, and Mehcad Brooks is a wonderfully-confident James Olsen (though a little too tall, given that Superman is supposed to be taller than Jimmy). These characters are doing a lot of good work toward molding Supergirl into who she’s supposed to be, but it’s also heavy-handed and Kara is too smart to be falling for it (especially Cat Grant’s manipulation, which grows to ridiculous heights in the earthquake episode). Supergirl needs her own story arcs, arcs that don’t require her to do the same things as Superman with the same people as Superman around her. As I recall, in The Death and Life of Superman Supergirl has an association with Lex Luthor. If this is independent of the DCCU, why couldn’t they have gone in that direction? 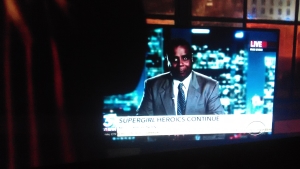 Does this mean Parks & Rec takes place in the Supergirl universe?

1. At some point, you have to show Superman. — I’m sure it’s legal wrangling that’s preventing this, but Superman’s outfit and personage has only been on the show once where we could see: the scene where he finds Kara’s spacecraft and welcomes her to Earth. Kara has texted him; she’s been saved by him; Jimmy passes messages to her from him. But it got tiresome quickly.

What I would do is… …logically show Superman when you need to. For example, in the earthquake episode, that was a major disaster and Supergirl wasn’t there. I know she wouldn’t have wanted to call him, but I can’t see why Jimmy wouldn’t have fired off a quick text: “Kara lost powers. Please help.” Now, if we were in the Singer-verse, in the time Clark wasn’t around, it would’ve made perfect sense for there to be no superheroes… except that the DC universe contains about a zillion of them. What was it Justin Guarini said?

Starlord: Galaxy. Superman: Earth. Spiderman: NYC. And then there’s Daredevil micromanaging the shit out of 10 blocks in midtown Manhattan.

The concept of a universe where all these heroes exist simultaneously falls down when you realize that you should have them all working together. It’s why, I think, Marvel has gone in the direction it has with Captain America: Civil War — it was pretty hard to believe that the Avengers didn’t assemble in The Winter Soldier, especially when DC was under attack like it was. Real-world logistics prevent it, I know, but sometimes you have to make sacrifices. And I just checked — Tom Welling isn’t busy at the moment.

All these romantic storylines are fine in my book; I enjoy romance in its place. But at some point you have to address the “Man of Steel, Woman of Kleenex” argument (and if you’ve seen Mallrats, you know what I mean). Kara grew up as a normal human girl who had superpowers and learned, with the help of her adopted mom and sister, to suppress them. There’s a huge story there (admittedly already done in Smallville in the other direction), and if we’re going to pay off these romances at some point, it’s going to have to be addressed.

After all, Superman might be able to use a kryptonite condom, but it doesn’t work the same way when Supergirl finally decides she’s ready for sex. (Though I suppose the guy could use one, right?)

Is Kara a virgin? I suppose we’ll find out at some point, right? 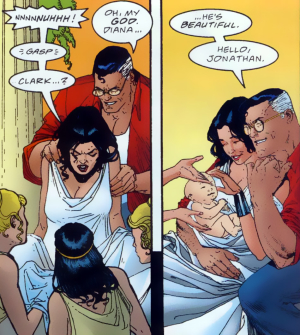 “Only someone like Wonder Woman has a strong enough uterus to carry his kid.” -Mallrats

* To be fair, what I know about Supergirl comes from a combination of the novelization of The Death and Life of Superman, the Supergirl film, and what I’ve been able to Google. Still.

** That’s what I’m calling it now, instead of friendzone. When you see the last two Hunger Games films, you’ll get it.