When Pope Benedict XVI was poped* in 2005, I was a member of TotalFark, the unfiltered firehose of user-submitted stories that eventually might make it to the free frontpage of Fark.com. I was watching the poping**, ready to grab the breaking news alert from CNN and submit it to TF with the caption “He’s-a the freakin’ pope!”

Because Family Guy humor is of course the best humor.

Unfortunately, the vast preponderance of people engaged in submission of popetacular articles went with the “Ratzenberger/Cliff Clavin” joke, and the Fark moderator working that day chose one of those. 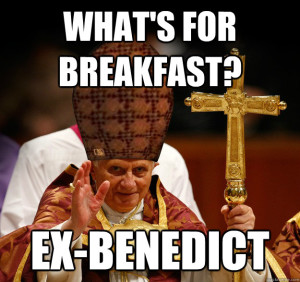 Eleven years later, people are even more obsessed with being first — this time, first to go viral. And they do so by creating pop-up Twitter accounts: accounts that (probably) aren’t officially affiliated with the product, brand, news story, or other thing, but are still out there to get retweets and engagements in hopes that maybe the person behind them will someday release a book or a link to some sort of product or service. In other words, viral self-aggrandizement. Companies figured it out, and now they’re doing it too, which sucks a little, but not if the person behind the social media desk is good at the job.

That said, there’ve been some pretty damn funny ones lately. I haven’t seen them all, but here are six of the best that I have.

6. @sb50woodude — Unless you had the TV muted or are unable to hear, chances are you’re aware of that one guy right near the main camera for Superbowl 50 yelling “woo” repeatedly. Early on in the game, someone capitalized on this with @sb50woodude, which was the best recent example of a pop-up Twitter account — hell, the guy signed off right after the game, and I haven’t seen any tweets from him since. He’s just a guy having fun with a cultural moment, similar to all the people who made left shark memes.

Well, woo time is over. I will live on as you try to sleep tonight. I will be there, quietly woo-ing you, unapologetically.

Engagement score: 4/5 WOOOOOOs — He didn’t flood Twitter with tweets, and he did reply to at least a few people, including me. I took off one point because he did retweet a Snickers ad, which leads me to believe that some intrepid person at Mars Incorporated was behind this. He also did tweet that he was on #TeamCap, a reference to Captain America: All The Marvel Heroes Except Hulk And Thor Are In This One, But It’s Not An Avengers Movie, but I don’t think he works for the studio. Still, good job, sir. (Or ma’am.)

5. @DragonTadCooper — “Tad Cooper” is the name of King Richard’s dragon on Galavant, an amusing musical program that just wrapped its second season. The show itself was very self-referential, with a combination of fourth-wall breaking, trope lampshading, and complete absurdity that appeals to people like me. It wasn’t as good as the first season, but it was still a success, and I’m pretty sure ABC will give them another season because, hey, what else are they going to run?

Thank you to all 1K followers who super believe in me!

Engagement score: 96% super belief in Tad Cooper — I became aware of @DragonTadCooper when I saw the coda scene at the end of Galavant, when King Richard went outside to feed Tad Cooper and he really had become a dragon. Since then, I’ve followed him on Twitter and Instagram, and while he primarily promotes Galavant, he also does a lot of retweeting and reposting of fan art and dragon-related images. It makes it seem less like a corporate shill account and more like someone having a good time — which is what appeals to me most. Also, the live-tweeting of the final episode was pretty hilarious. 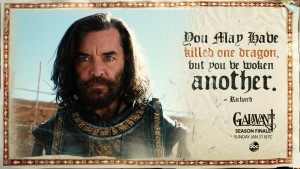 4. @rikergoogling, @worfemail, and @picardtips — These three accounts are the brainchild of entertainer Joe Sondow. For Star Trek: The Next Generation fans, they are invaluable entertainment — less @rikergoogling (which is a one-note joke) and more the other two. @worfemail follows the saga of Enterprise security chief Worf and his effort to be a good manager, and does a hell of a lot in 140 characters. @picardtips distills the wisdom of Captain Picard into easily-digestible chunks that also happen to be good advice for the workplace. Sondow runs these accounts (I’m guessing) primarily for his own amusement, but he also makes $60 per month on Patreon, so he must be doing something right. Each one is worth following.

Picard management tip: If it feels like time is moving at the wrong speed, cancel a few meetings.

Engagement score: 3 saucer separations — These accounts require quite a bit of creativity, but like with @DragonTadCooper, they’re basically a form of fan fiction. Not that there’s anything wrong with that. I follow all three, although I may drop @rikergoogling soon because it’s too much like this account, which wasn’t funny to me after the first couple of tweets. Besides, @shitmydadsays did it better. 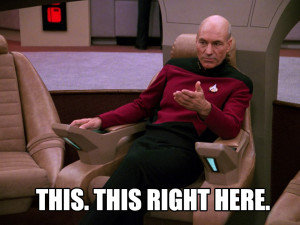 3. @CounselorWorf and @TNG_S8 — Sticking with TNG for a moment, I wanted to call out two of the first pop-up accounts that I followed; they’ve both been around since 2011, and I’ve been laughing at their humor since then. (Plus, @CounselorWorf follows me, which is kind of cool.)

Engagement score: 47 red alerts — The problem with a pop-up account is that eventually either the writer gets tired of it or runs out of material. I mean, I write a weekly column, I’ve only done about 100 of them, and I’m already scraping the bottom of the barrel here. Staying fresh and funny isn’t an easy task, and some pop-up accounts fade away. I mean, really, how far can you take the Counselor Worf joke? Though, if you plan ahead, you can last forever, like the next set of accounts. 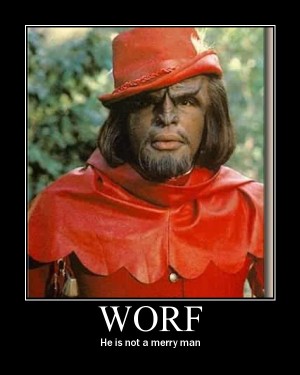 2. All those literary accounts. — It started out simple, with someone I know retweeting @DystopianYA, a cliche dystopian YA novel that hangs lampshades on every trope in every one of those books. Reading back through the archives is pretty amusing. Anyway, it’s written by author Dana Schwartz, and while I’m sure it started out as a fun outlet, it’s now got a huge following. It’s also spawned plenty more by other people. Here are some tweets from the ones that I follow:

Engagement score: 75 Hunger Games — What I love about these is not only how they expose tropes but also how the writers of them interact with the people who reply to their tweets. That’s the thing about social media: you don’t just go viral by putting it out there; you have to do the work. These folks do. Good job. 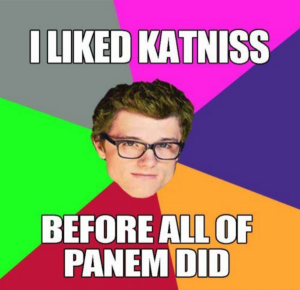 1. @SavedYouAClick — I’m sure I’m not telling you anything you don’t know at this point, but Jake Beckman created @SavedYouAClick in response to all the blatant clickbait teases on Facebook and Twitter. That pretty much says it all.

Engagement score: 99+ RTs, 99+ likes — The thing that makes @SavedYouAClick work is that rarely does Beckman print any news that you probably don’t already know about. Powerball numbers, sporting events, election results; you already saw them. But what he does do is draw attention to the increasingly-short attention span of Americans and many other Westerners: we need to know everything now, and quickly. Media organizations are fully aware of this, so they create clickbait to try and get you in, where you will then see ads. Also, it’s fun to laugh at tweets such as the one above — information that could be gleaned by a simple Google search, which has somehow become an entire article (or, worse, a gallery), is tweeted out by some media agency, and people still click on it for some reason. Hell, sometimes even I do. 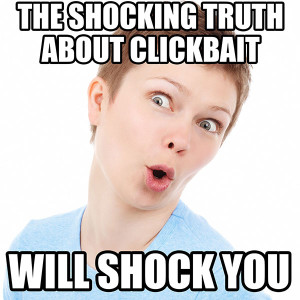 In case you’re interested, here the six first Twitter accounts I followed, back when I joined in 2008:

** Don’t worry, I’m not going to do this through the entire article. Just bear with me for a few dozen more words.