SIX OF THE BEST… Highlander films

SIX OF THE BEST… Highlander films

Recently, the fine folks at the Dunesteef discussed the first Highlander film, because Big Anklevich had never seen it until this year. As a fan of the Highlander mythos, I of course was extremely interested, and Big and Rish had a lovely little discussion about what was good and what wasn’t. They both made a lot of sense.

Rish also mentioned that there had been six Highlander films. You can guess what I thought about next.

Yup. In order, from worst to best. Spoilers for all six movies. 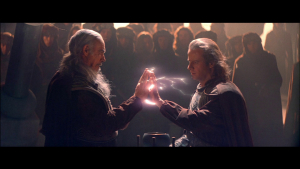 6. Highlander 2: The Quickening — After the cult following that the first film earned, it was only too logical that they’d make a sequel. But what else can MacLeod do now that he’s the last immortal? Well, somehow he parlayed all his knowledge into helping fund and create a shield to protect Earth from a depleted ozone layer. This seemed like a good idea at the time, but it really wasn’t, as we learn. We also somehow find out that immortals are actually exiles from another planet (or “a long time ago”, if you watch the Renegade Version). I’m not sure why Michael Ironside waited until MacLeod was old to come through and kill him, but there you are. Anyway, by killing an alien soldier, MacLeod becomes young and takes on Michael Ironside, who has coopted the guy from Scrubs (who is the leader of the Shield Corporation) and… is doing something? I don’t really remember. At the end, someone gets his head cut off.

It’s ranked here because… This film was pretty awful, and even though it was the first one I’d seen, I still somehow wanted to see the original. Even major overacting by Michael Ironside and a sci-fi plot with about as much positivity as the anti-nuclear plot in Superman IV couldn’t save this one.

By far the best part was… …Ramirez’s death scene. Specifically, what he said to MacLeod and Louise.

Most people have a full measure of life… and most people just watch it slowly drip away. But if you can summon it all up… at one time… in one place… you can accomplish something… glorious.

Also, this bit of exposition from Louise was great.

5. Highlander: The Source — The fifth film in the series, and the first not to feature Connor MacLeod, this one takes place in the relatively-near future. Duncan MacLeod, the immortal protagonist of the TV series (more on that later), is now married to a mortal woman, Anna, who is having visions. Somehow this all ties into the location of The Source, where all immortals get their power. Duncan teams up with his old friend Methos to avenge his friend Joe’s death and learn more about The Source. As the immortals get closer, they start losing their power and everything else that makes them immortal — including the inability to have children. Duncan has sex with his wife (because, y’know, she’s his wife and married couples do have sex) without realizing this, and at the end, after Duncan kills the bad guy, he learns that he will be a father.

It’s ranked here because… I was sorely disappointed by this movie. The acting wasn’t great, and there were a lot of swing-and-a-miss moments in the futuristic plot. The idea of there being a source is cool, but immortals have been around since the dawn of time, if you listen to the narration in the first movie. You’d think they’d have been everywhere.

By far the best part was… …when Methos pretty much sacrificed himself to save everyone. Methos was one of the coolest characters on the show. 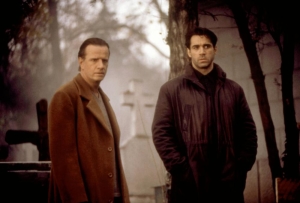 For an immortal, Connor’s looking pretty old. (He’s the one on the left.)

4. Highlander: Endgame — This is the fourth film, and it takes place after the end of the TV series. Connor’s friend is killed and he goes into hiding with the Watchers to ensure that no one wins the prize. A monk with a grudge against Connor MacLeod seeks this hiding place (and the prize), and surrounds himself with warriors so he can win it. Duncan, however, was married to one of the warriors and is respected by another. Some of the mythology is furthered here — the more immortals you kill, the more powerful you are — and it seems the only way for Duncan to be powerful enough to defeat Kell (the monk) is to kill Connor. Connor maneuvers Duncan into an inescapable move (I could think of about ten ways to get out of it) and forces Duncan to kill him, and then Duncan goes after Kell.

It’s ranked here because… Look, I see what the franchise was trying to do, but I think there just wasn’t enough here to justify passing the torch. After the third film, the theatrical run should’ve been finished, but there was money to be made. Also, for some reason, there was a WWE tie-in, with Adam “Edge” Copeland playing a villain with a few minutes of screen time. For that I’m glad, because Copeland went on to have a good turn in SyFy’s Haven.

By far the best part was… …Duncan’s fight with Jin Ke, played by Donnie Yen, the fight choreographer for the film. 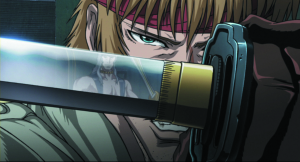 One of these things is not like the other.

3. Highlander: The Search for Vengeance — The only animated film, this anime follows Colin MacLeod, a Roman who was adopted by the MacLeods after joining them in battle. Most of the story takes place in the late 2100s, in a post-apocalyptic universe, Colin must battle Marcus Octavius, an immortal who for centuries has been at the right hand of oppressive regimes. In 2187, Octavius wants to kill people using a virus so he can be a better tyrant, and Colin wants to stop him. You can guess how it ends.

It’s ranked here because… This was an interesting experiment, and a reasonably enjoyable film to watch. I think it got repetitive after a while, and the dystopian nature of the “present” was something I’d seen before, but at least the art is great.

By far the best part was… …Colin and Octavius’s centuries of battle, neither being able to defeat the other despite countless duels. There was a sense of futility to it, like Colin knew he couldn’t win but he kept trying because he believed he was doing the right thing. Which he was. 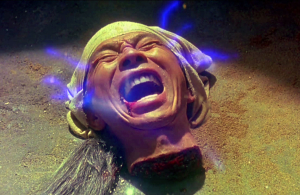 With a cameo from one of the talking heads…

2. Highlander 3: The Final Dimension / The Sorcerer — Ignoring the second film entirely, we pick up on Connor MacLeod living in Africa with his adopted son. He realizes he hasn’t really won the Prize because he’s still immortal. Turns out three immortals were trapped in a cave-in in Japan when Kane, a contemporary of Genghis Khan, attempted to learn the secret of illusion, which MacLeod had previously learned (and never used in the first film or any other time except in this movie). An archaeological expedition disturbs the cave-in and Kane escapes to wreak havoc, including the kidnapping of MacLeod’s adopted son. MacLeod must defeat Kane to win the real Prize, although I suppose the TV series ignores this movie too because MacLeod is still immortal through the fourth movie.

It’s ranked here because… Of all the sequels, this was probably the best of them. MacLeod faces serious opposition in Kane, and is forced to go back to his roots. Kane is also a great villain, and a pragmatist in his own way.

By far the best part was… …Kane’s utter lack of morality in any way whatsoever. Also his amusement when the hooker hands him a condom. 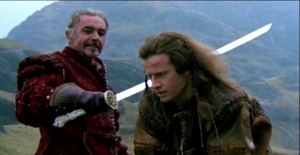 Could’ve saved us a lot of trouble, Sir Sean, if you’d just cut his head off in 1500-whatever.

1. Highlander — Duh. The original and still best, despite its plot holes. Immortals have lived among us since the dawn of time, the only way they can die is by having their heads cut off, and at a predetermined time those who remain will come together to battle for the ultimate prize. So, in 1980s New York City, Connor MacLeod and several others, including the evil Kurgan (who raped MacLeod’s wife 400 years ago, and killed his friend and trainer Ramirez around the same time), battle. We also learn how MacLeod became an immortal and was trained by a wandering Spaniard. The story is dark and grim, but also funny in places. The soundtrack, mostly by Queen, is kick-ass, and the final fight is epic.

It’s ranked here because… There’s no way any of the sequels could ever come close to replicating its magic. How do you rank down a film with Queen, the Fabulous Freebirds, and Clancy Brown and Sean Connery as two of your three leads?

By far the best part was… …Clancy Brown as Kurgan. He owned every scene where he had more than one line of dialogue. (I also liked how, when the cop accused MacLeod of being “a faggot”, instead of getting angry, MacLeod used the cop’s intolerance of homosexuality against him. Fight smart, not mad.)

And here’s Edge. Just because.

And then there was the TV series, which ran for six seasons and spawned millions of words of fan fiction. There was also a spinoff, The Raven, focusing on one of Duncan’s foils, Amanda, and an animated series where Ramirez returns.

Honestly, I’m not sure how Highlander spawned as much as it did. It’s one movie, and not even a really good one when you look too deeply into it. I guess it’s nostalgia and fan-love, and the possibility to make more money. Studios are working on a remake even as we speak, and I think it could be a good thing, if done right.

But when has studio interference ever led to that?

By all means, let’s name a show “The Raven” after a dark-haired immortal and then have her dye her hair ridiculously blond. Because that makes sense.