SIX OF THE BEST… French people in genre TV and film

SIX OF THE BEST… French people in genre TV and film

As you may or may not know, yesterday was Bastille Day, celebrated around the world with the commemorative listening-to of the Rush song of the same name.

And, in honor of the storming of the Bastille, here are six of the best French people in genre fiction. If you don’t agree, feel free to tweet at me or add a comment.

6. Gregoire de Fronsac — Hey, remember when Crouching Tiger, Hidden Dragon was so popular that everyone and their mother was trying to make a wirework martial arts film? Well, Canal+ gave us their take on it with Brotherhood of the Wolf, a 2001 film about de Fronsac, the royal naturalist, and his Iroquois companion Mani, who are called in to take on the legendary Beast of Gevaudan in 1765. Mixing swordplay and martial arts, as well as some detective work, this is a fun horror-fantasy film that brings us a character we’d like to have in the world today.

5. Erik — Speaking of horror, how about Gaston Leroux’s original masked angel of music, the Phantom of the Opera? Erik has been portrayed by many — most famously on stage by Michael Crawford and in film by Gerard Butler — and the character himself is a staple of the horror mythos: black dress, white mask, scarred face; a recluse living in the basements and sewers but only wanting love and happiness (and music). There’s probably some Hunchback of Notre Dame in here*, but I prefer the Phantom. 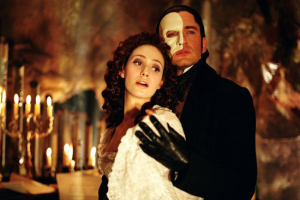 4. Amanda Darieux — I thought about putting Inspector Clouseau here, but the list was already pretty heavy with men and anyway I really liked the Highlander series. Amanda was born into poverty in 820s Normandy, and clawed her way to the top of her game by the late 20th century. A perennial lover and foil to MacLeod, the star of the show, her episodes were often humorous; even though she didn’t always get what she wanted, she still managed to come out clean and continue the game. Eventually Amanda got her own spin-off, but the show only lasted a season and wasn’t that great. The bloom was off the Highlander rose by then. 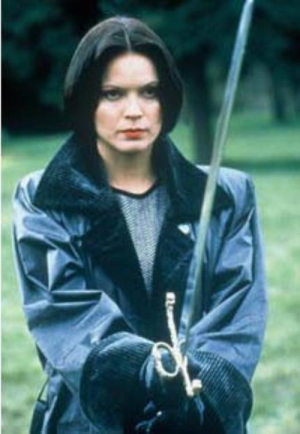 3. The Coneheads — “We are from France!” Though your kids might only know them as the weird-headed people from the State Farm commercials (which, not gonna lie, are pretty funny), Dan Ackroyd and Jane Curtin pioneered the 1970s SNL sketch about cone-headed aliens stranded on Earth and just trying to fit in. There was a film in the 90s, too, and I rather enjoyed it. Part of the fun of the Coneheads is that everyone knows people from France look just like people from anywhere else, but the writers make it work. Also, the Coneheads brought us such phrases as “consume mass quantities”, which really needs a resurgence. 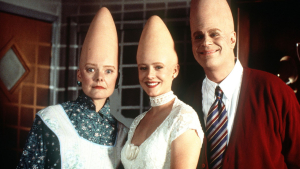 2. Belle — Belle is generally seen as the nerdy Disney princess: she loves to read more than anything else, she’s quite smart, and she doesn’t fit in. No wonder nerds are drawn to her. While Beauty and the Beast is an older story in general, it’s the Disney version** that sticks in people’s minds. I suppose the songs help. Belle rejects the attentions of the town bully/studly-dude in favor of the recluse who at first imprisons her but really only wants to be loved. I admit, there’s more than a little Stockholm Syndrome in there, as well as some unanswered questions, but there are worse role models than Belle out there. 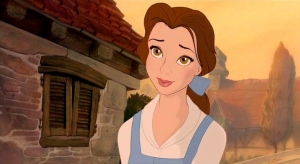 1. Jean-Luc Picard — Oh, come on, like I would have put anyone else up here. The legendary captain of two Enterprises, Picard prefers to seek out the nonviolent solution but will kick a little ass as needed. He’s firm but fair, and just when you least expect it he’s got a kind word and a smile to go along with the hard lesson you just learned. Picard has gone toe-to-toe with the Q, the Borg, the Klingons, the Romulans, and even the Federation itself (after he lost his first ship, the Stargazer), and although he’s faced adversity and loss from all of these he’s only come out stronger for it. Captain Picard, you are the top French person in genre fiction. Make it so! 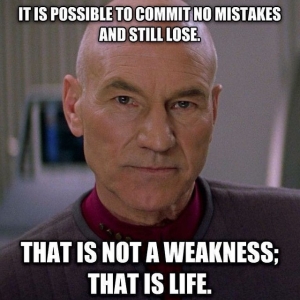 And how about an honorable mention for Pepe le Pew, who refused to take no for an answer and these days is seen as a sad stalker instead of a funny animated character with an accent?

Dude. She said no.

* Which I left off because I’ve neither seen nor read it. Not even the Disney version.