I saw an ant crawling up my front door as I left the house this morning, and my brain, as it is wont to do, went all over the place. Eventually it ended up thinking about mosquitoes, and how my daughter hates them (but they sure as hell love biting her).

I remember once that she asked me why we have to have mosquitoes. I looked it up and gave her the answer, but she wasn’t what I would call happy about it.

And let’s face it: there are plenty of bugs in the world that we really wish didn’t exist. But there’s a reason for everything in nature — even the duck-billed platypus. With that in mind, here are six of the best annoying bugs. (And I’m skipping bees, because I think we all know what will happen if we don’t have bees.)

(Warning: there will be photos of bugs in this post. If this grosses you out, you have my permission not to read any further. Farther? Whichever.) 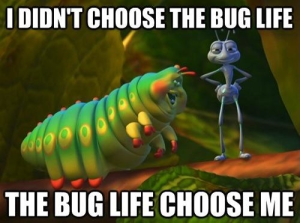 6. Mosquitoes — According to Nature, there are more than 3500 named species of mosquito. That’s a lot, just to fly around, bite people, transmit disease, and be food for birds and fish. Specifically, there are certain fish who exist just for the purpose of eating mosquitoes, and without those fish in their position in the food chain, the rest of the chain could suffer. Some species of birds, fish, amphibians, reptiles, and even other insects would also lose a food source. Scientists believe that another insect would take the place of the mosquito if it disappeared, but I’d rather get bitten a few times each year than take that chance. 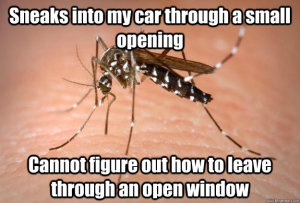 5. Ants — The bane of picnics, kitchens and playgrounds everywhere, ants come in many varieties, all of them annoying. You’re probably most familiar with red ants (which bite), black ants (which don’t, usually), fire ants (which bite and it feels like fire), and maybe carpenter ants (which eat wood at your house). But an article from One Green Planet warns that ants provide valuable services to the world at large. They help with soil decomposition, they move seeds and pollens, and they even eat the eggs, larvae, and nymphs of more dangerous insects such as flies, fleas, and bed bugs. I mean, I still don’t want them in my kitchen, but if they’re not bothering me I don’t see why we can’t just live and let live. 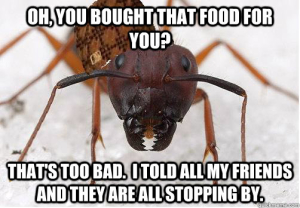 4. House centipedes — These things are just plain scary-looking. They’re long, they have more than two dozen legs, and they crawl along our walls and ceilings. We have no idea where they come from or why they’re in our houses. I see maybe one or two a month, and, yes, I admit it, I kill them. But maybe I shouldn’t — the Metropolitan Field Guide says they’re hunters which eat spiders, flies, silverfish, and even roaches. They use venom to kill their prey, they keep themselves clean, and they can live up to three years. Some people even keep them as pets. Oh, and when they feel threatened, they can detach their legs and leave them behind as alternate prey for predators. That’s not creepy at all. 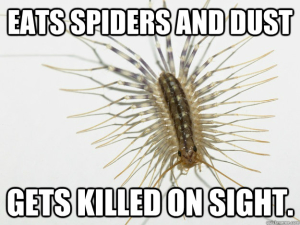 3. Cockroaches — If you have roaches, that generally means your house is dirty, right? Or it could mean that you have imperfect seals and the roaches sense food. It sucks to find them, too: they’re huge, gross, and sometimes hard to catch and kill — and if you smash them on a wall, they leave a smear that’s not always easy to remove. But, again, they’re a food source for other creatures. According to Live Science, they’re eaten by small mammals, such as mice and rats. Without the insect-eating creatures in the food chain, larger species would die off. And then there’s the cockroach’s poop, which is full of nitrogen, and that helps nourish plants. We need those to breathe, remember? 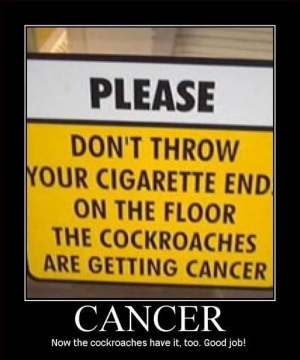 2. Wasps — Wasps are assholes. They build nests, fly around, sting people, and even kill bees — which we need to survive. Unfortunately, as usual, it’s all about the food chain. In this case, wasps are at the top of it. National Geographic notes that nearly every pest insect on Earth is prey for some species of wasp, and in fact wasps can be used to control the populations of other pests. Just don’t piss them off — “social” wasps (and other insects in their group, such as yellow jackets and hornets) emit a pheromone when in distress that calls nearby wasps and tells them to attack everything in sight. Wasps can also sting multiple times. If you can catch a wasp in your house (in a tupperware or something) and let it go outside, that’s probably better than risking it going crazy by you trying to smash it and failing. 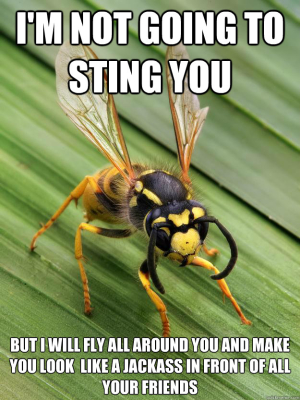 1. Spiders — In general, we know that spiders are mostly beneficial creatures. They eat other bugs, they spin webs, and they’re all venomous to a point. Some of them can kill you, and some of them can only kill other bugs. But what I think is more interesting is why we as a culture are so afraid of them. I mean, I don’t like spiders, but they don’t scare me. At least, the little house spiders don’t — if I were confronted with a brown recluse, I’d nuke the site from orbit*, and spiders like that are a prime reason I never want a house with a crawlspace. So why are we scared of them? Well, an article in the Daily Mail cites a Plymouth University psychology professor’s findings: spiders are dark, angular, and fast-moving, all things that humanity is socialized by its collective unconscious to fear. The professor also says that arachnophobia (and other insect phobias) are often socially-conditioned — that is, we learn it from our parents, siblings, and friends. I guess that’s why I was never afraid of bugs; my parents didn’t freak out, so I don’t freak out. I mean, we used to get enormous palmetto bugs in the living room when I was preschool-aged, and it was kind of cool to find them and see them just hanging out on the carpet before someone removed them to the trash (usually in smooshed form).

Oh, and just in case you were wondering, spiders are useful as predators for other insects, as well as a source of spider silk, which is an extremely tough, useful material. 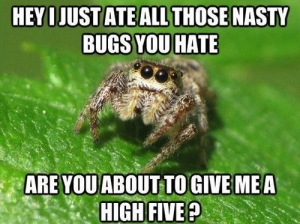 I really wanted to include a bit about fruit flies — trust me, if you’ve ever left bananas on the counter for too long, you’ve had to deal with these little pests — but Google seems to keep directing me to other research articles where fruit flies were used to test hypotheses. I’m sure fruit flies have other reasons for existing besides science and annoyance, but I was lazy.

Do your own research, slacker. 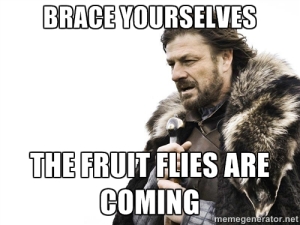