I love Star Trek. As a (hopefully) regular reader of this column, you know that already. And today I’d like to shine a little light on the only Trek TV series not considered canon.

That’s right: it’s Star Trek: the Animated Series. Only lasting for 22 episodes, TAS helped to bridge the gap between TOS and the first film. And, surprisingly, it’s better than you might expect; it not only showcased James Doohan’s voice talents, but it also gave us episodes written by the likes of Larry Niven, Walter Koenig, and David Gerrold.

If you haven’t seen it, don’t worry about watching it in order; each episode is a stand-alone story. You only have to have seen TOS to know what’s going on. So, with that said, here are six of the best TAS episodes for your viewing enjoyment.

6. The Practical Joker — I’m including this episode for one reason: 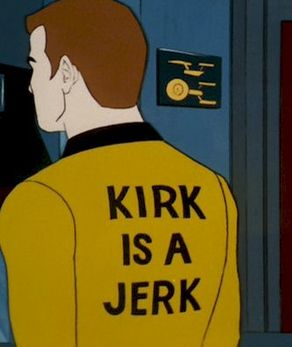 Also, the concept of the “balloon ship” was reused in John M. Ford’s excellent TOS novel How Much For Just The Planet, which every Trek fan absolutely must read.

5. The Time Trap — I really enjoy time travel and time-related episodes (one of my favorite TNG episodes is “Cause and Effect”, AKA “the one where the Enterprise blows up before the opening credits”). This episode forces Captain Kirk and the crew to work together with several supposed enemy races to escape from a null-time bubble, and it also features the return of Kor (voiced by James Doohan instead of John Colicos this time around). Overall a pretty good episode, despite its reliance on the “Bermuda Triangle” trope.

4. The Infinite Vulcan — The first of two Spock-centric episodes, this one was written by Walter “Chekov” Koenig. On a planet of plants, a self-exiled human scientist who’s made an enormous clone of himself also clones Spock in an attempt to enforce peace on the galaxy. This was a big episode, and not just because of the giants on it; I think Koenig tried to get a full 50-minute episode of TOS into TAS, and while some of the cuts were obvious, it was still a great one and worthy of inclusion. 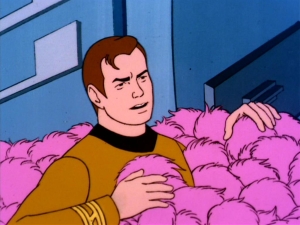 3. More Tribbles, More Troubles — The tribbles are back! Written by David Gerrold, who wrote the original tribble episode as well, this one finds a new way to retread the old material: Cyrano Jones is a criminal in Klingon eyes, but Kirk won’t let him be extradited. Meanwhile, his genetically-engineered tribbles are just as much of a nuisance as ever. At the end, a hail of tribbles falls on Captain Kirk. Again.

2. The Lorelei Signal — Margaret Armen (who wrote three TOS episodes including the great “The Cloud Minders”) penned this tale about a planet that hypnotizes men. Uhura, Chapel, and a team comprised entirely of women must save the day. This episode could never have been done on TOS, but back in the 70s no one took cartoons seriously. While Uhura was almost never relegated to the “damsel in distress” role, this episode showed just how competent she is — something that was explored a lot more in the novels, but unfortunately never enough on-screen. 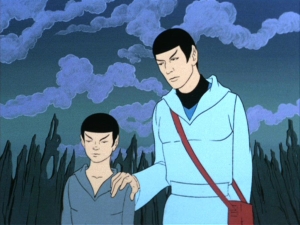 1. Yesteryear — Everyone loves Spock, right? But what if Spock had never existed? TOS luminary DC Fontana uses the Guardian of Forever to show what might have been, and introduces us to Spock as a child. The episode also brings back Mark Lenard as Sarek. This is the best of the TAS episodes by far, and even though it’s not canon a lot of its material has been absorbed into canon in one way or another — even by JJ Abrams’s 2009 reimagining of Star Trek.

Because of reasons, not every character could be in every episode — or at all. Walter Koenig wasn’t able to be on TAS, so his role was replaced by Lt. Arex, a “Triexian” (three arms, three legs). Meanwhile, at the communications station, Uhura was occasionally replaced by Lt. M’Ress, a “Caitian” (cat-like creature). I guess they didn’t want to just use Lt. Palmer?

Anyway, Arex and M’Ress reappear in Peter David’s New Frontier story arc, and they get a nice sub-arc throughout the later books. 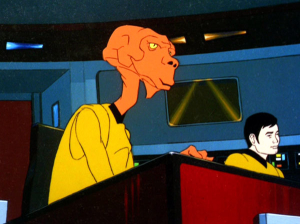 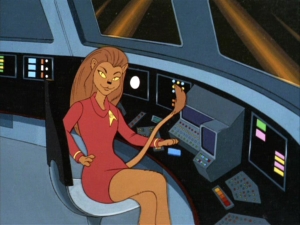