SIX OF THE BEST… alternatives to classic card games

Home/Gaming Addicts Anonymous, Six of the Best/Worst/SIX OF THE BEST… alternatives to classic card games
­

SIX OF THE BEST… alternatives to classic card games

A couple of months ago, I wrote a column about alternatives to classic board games. But sometimes you don’t feel like pulling out a box with a bunch of pieces and tokens and such. Sometimes you just want to play cards.

And sometimes you get tired of playing the same old card games. So here are six of the best alternatives to those classic games. 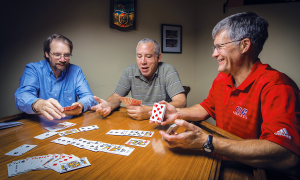 6. Poker — Ah, the ultimate gambling game. It has numerous variations (five-card draw and Texas Hold ‘Em are two of the most popular), and it often requires gambling (even if you’re just playing for chips and not actual cash) to be any fun. Thing is, playing for money doesn’t always work when you’re playing with friends, and you may not be able to find (or afford) a poker tournament when you want to play.

Why not try… Monopoly Deal. How about a card game that takes the family-destroying, friendship-smashing board game and turns it into something you can play quickly and easily? Poker can destroy friendships and families if money is involved, but Monopoly Deal doesn’t have real money — yet it still feels like you’ve won when you actually claim victory. Plus, I mean, the goal is reasonably similar: get three-of-a-kind three times. It’s like having to get a flush or multiple pairs or something. 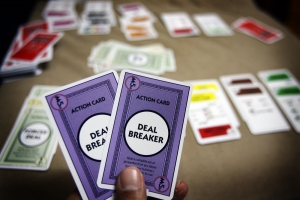 5. Hearts and Spades — I learned how to play Hearts thanks to Microsoft Windows, and I got really good at it. I also played it on Sierra’s old Hoyle game simulator (which you can actually download and play). Then, in high school, Spades was the thing to play, so I learned that as well, but I preferred Hearts because you didn’t need to have teams or gamble how many books/tricks you could win. After a while, though, you get to know your opponents’ strategies, especially if you play often with the same people. That can get tiresome.

Why not try… Apples to Apples. Okay, it’s really popular, and it’s even more popular as Cards Against Humanity (although people have been levelling some pretty sharp criticism against it), but it has some of the same qualities as Hearts and Spades: every player plays a card, and the person who wins the book/trick gains some sort of point. But instead of gambling against what other people are playing in terms of points, you have to gamble against what the judge of the round is going to think is funny or apropos as well as what your opponents are going to think the judge of the round thinks is funny or apropos. It’s a fun dynamic, and it engenders a lot more laughter than “oh, damn, I thought you played all your face cards already”. 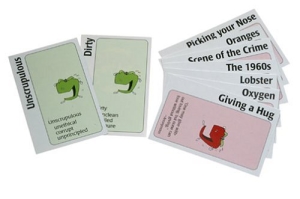 4. Skip Bo / Spite and Malice — I remember being elementary school-aged and my mom teaching me how to play Spite and Malice while my sister was in gymnastics class. I enjoyed it, but we didn’t play it much. Then, later, I played Skip Bo, which is pretty much the same game except with specialized cards (that are more like Uno or Phase Ten cards). Skip Bo is a fun game, but it can take a while and if you get an unlucky shuffle in your 30-card pile, and if you’re playing for points you might get sick of it before you get to 500.

Why not try… Mille Bornes. I remember playing this a couple of times as a kid, and then finding an online version and playing the hell out of that. This is a French game where you’re on a journey to travel 700 (or 1000) miles faster than your opponent by playing speed cards, mileage cards, hazard cards, and protection cards. Like Skip Bo, it has a defined endpoint, and like Skip Bo, a bad run of cards can really mess you up, but it’s still a fun game. At least, I think it is. It’s also a classic, having been created in 1954, but it’s not so popular (at least in the US) that people will be bored by it.

3. Uno — Let me preface this by saying that I really like Uno. I first learned how to play it in summer camp, but because I didn’t have a lot of friends I usually just played one-on-one. That meant every Skip and Reverse card meant I (or my opponent) simply got another turn. Later, as I got older (and made more friends) I discovered that Uno was actually harder than I’d thought because Skip and Reverse didn’t give me another turn. The game took longer, and was more frustrating. I’ll still play it, but it has its issues.

Why not try… Fluxx. This game has two basic rules:

How simple is that, right? The rules change every few turns, so the game is constantly different, and you can’t just depend upon one strategy to win because your opponents are going to figure you out and use their cards to put a stop to it. And when you get tired of regular Fluxx, you can expand to Star, Monty Python, Zombie, or even Stoner versions of the game — and each one has its own additional rules to add new wrinkles and challenges. Fun fact: when I bought my Fluxx set, I played about ten games in a row with my daughter. She won the first eight. 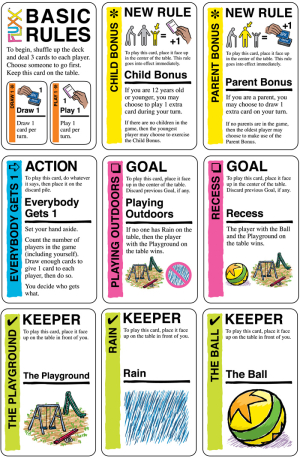 2. Gin Rummy — When I was younger, my parents bought me a Rummikub set. I didn’t really have any idea how to play it until middle school, when my friend Kurt (more on him in the Bonus Content below) explained it to me. Then I realized it was like Gin (which I knew how to play) but with point scoring and some of the same game metrics as Cribbage (which I loved) and Gin (which I was good at). When a friend in college asked me to play Gin Rummy with her and she explained the game to me, I caught on quickly. It’s an enjoyable game, and relatively easy to teach kids, but sometimes you want to play something different.

Why not try… Quiddler. My friend Jen introduced me to this game in college and I was hooked. It’s like Gin meets Scrabble: you have to collect the right cards to build one or more words before your opponents do it, and you get scored for the letters you use. The game ends after eight rounds, and the person with the most points wins. You can use big words, small words, whatever you like, as long as the words are two letters or more in length and are Scrabble-accepted. You can play it with two or more people, although once you get past six it’s a little unwieldy.

1. Go Fish — Ah, the classic card game. I have such wonderful memories of playing Go Fish with my great-grandfather, the smell of his pipe smoke surrounding us while my great-grandmother did… well, I’m not sure, but she was always nearby. I’ve played some Go Fish with my daughter, too, but it’s not the same. And, I mean, it’s like a matching game where you don’t know where all the tiles are. It’s pretty simplistic, and it can get boring after a while. Sometimes you just need a change.

Why not try… Spot It is a fun game with circular cards that can be played by people of any age. It comes with a list of variations, each with different win conditions, and it’s far more challenging than you might think just to match pictures to other pictures. I was surprised at how much I enjoyed this game when someone gave it to my daughter as a gift, and I know she still plays it with my mother when she goes to visit. And as with Fluxx there are several different editions when you get bored of the basic game. 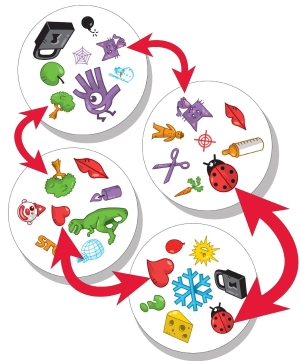 For the past ten years or so, I’ve been looking for my friend Kurt (I’m not revealing his last name for privacy’s sake). We met in sixth grade and were friends up through about ninth, when we drifted apart (and he went to a different school). He was an awesome guy and a good friend. His last name is fairly common, so there are plenty of them out there, but none are him. I’ve been Googling, Linked-inning, and Facebooking as hard as I can, but to no avail.

Kurt’s mom remarried and I remember that her new last name (which his younger sister took, but he didn’t) was a slightly-uncommon spelling of a common word. So when I found a woman on Facebook of about the right age with the right name (and the uncommon spelling), I sent her a message.

To this day, Kurt remains a mystery. If your name is Kurt and you’re reading this article and you lived in South Florida in the early 1990s and you recognize my name, how about dropping me a message.