SIX OF THE BEST… alternatives to classic board games

Home/Gaming Addicts Anonymous, Six of the Best/Worst/SIX OF THE BEST… alternatives to classic board games
­

SIX OF THE BEST… alternatives to classic board games

Do you groan when someone in your family pulls out Monopoly, knowing that you’re about to be in for three hours of hell, ending when you all give up because no one is ever going to win? Well, then, this column is for you, because I’m about to give you six of the best alternatives to classic board games. 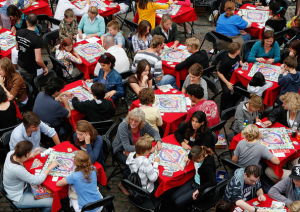 6. Monopoly — Might as well start with this one, right? Do you have three or more hours? Do you have all the pieces? Do you have someone willing to be the banker? Can you agree on Free Parking rules? Oh, sure, new versions of Monopoly have made it easier to handle banking and property, but who’s actually spending money on those, especially when there’s a perfectly good set from when you were a kid… except for the missing hotels, which you replaced with checkers from one of the million Checkers sets that got messed up anyway because you used all the pieces to play Nok Hockey.

Why not try… This one’s a gimme: Settlers of Catan. Catan combines the property-grabbing of Monopoly with an easy-to-understand win metric: you have to earn ten points. Catan is expandable — I prefer Seafarers, myself, because I like the ships and the additional challenges — and no one is out before the game ends. It still takes a while — 45 to 90 minutes — and definitely depends upon luck, but there’s also skill involved: where you put your roads, settlements, and cities; when you play your development cards; what strategy you want to use to win. What’s the strategy in Monopoly? Get as much property and money as you can. That’s it. 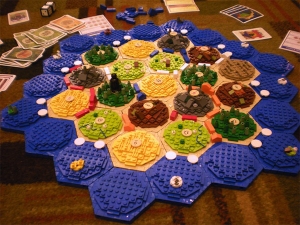 5. Risk — I’ve never played Risk. I tried Axis and Allies once, and after four hours I gave up. I’m told Risk takes about that long to play. It has a zillion pieces, and the rules are super-complex. I guess at my age I’m past the point where I could on-ramp into playing Risk. So I need an alternative.

Why not try… Pandemic. The whole world is involved, but it’s not competitive, it’s cooperative: you all win or none of you win. If you really want a worker placement game, you could try Stone Age or Lords of Waterdeep, which both are fun, but for a real world-spanning challenge that appeals to a 21st-century audience, I choose Pandemic. These days, the West isn’t as afraid of war as they are of ebola, the flu, or MRSA. Instead of casting yourself as a WW2-era general, you cast yourself as a scientist or an operations specialist (or a different character; it’s been a while since I’ve played) and work together to save the world. (If that dynamic appeals to you, you might also like Forbidden Island, which is cool in that you can play it in “solitaire mode” because the island is the real villain.) Oh, and I almost forgot Small World, which is more Risk-y than Pandemic, but that game has so many pieces and you absolutely have to have a rules lawyer to play it.

4. Life — No matter how often Hasbro refreshes the Game of Life, it’s still basically a wish-fulfillment fantasy controlled by a god of random chance (the spinner). You have a limited amount of choices, and in the end you get to be something you probably never will — a millionaire, a philanthropist, a professor, whatever. I’m pretty sure that you can’t end up as an office drone in the game. And, what’s worse, the newer versions are just depressing because they hold a mirror up to our lives and show us how empty they are. Who wants to play that?

Why not try… Sorry. Yeah, I know, it’s still a classic, but it’s one that remains fun to play, and it’s really more accurate in terms of how life is: you get a limited amount of resources (number cards), some of them do weird things, and ultimately you’re going to have to screw someone over to win the game. It plays faster than Life, there are fewer pieces (a maximum of 16, not including the cards), and no one who says “Sorry” in the game actually means it. Ever. So, y’know, just like being a public figure in real life, right?

3. Rivers Roads and Rails — I admit this one’s a little esoteric, but as a kid I really liked this game: draw tiles and play them to create an interconnected series of (you guessed it) rivers, roads, and rails. I know this isn’t strictly a board game because you can play it on any flat surface that’s big enough, but as you play you create the board, and that’s really the spirit of board games.

Why not try… Tsuro, or, The Game Of The Path. This takes the same game metric as RRR — make sure each tile lines up with every tile it touches — and both limits it while also adding a win condition. The goal of Tsuro is to not let your dragon die by having it run off the board or run into another dragon. The board itself is limited in size, which adds an additional challenge. And, best of all, it only takes about twenty minutes to play a game at most. Also, it’s easy to teach kids to play, which means you can share it with the entire family, as long as they’re old enough not to put the dragons in their mouths. 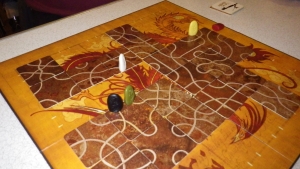 2. Scrabble, or any other word game — Don’t get me wrong; I love Scrabble, mostly because I’m really good at it. I don’t play with the updated wild tiles, either; I play OG Scrabble on a board from the 1960s that has a built-in lazy susan and built-in scoring pegs on the tile racks. It’s awesome, and it’s probably the one thing I really want my parents to hand down to me. But Scrabble can get boring, and it can take a long time to play.

Why not try… Bananagrams. I was introduced to this game about two years ago and I took to it like a duck to water. Imagine you have a bunch of letter tiles that you can arrange any way you want, as long as you do it quickly. When you run out of tiles, everyone takes another tile. When you are out of tiles, and the kitty is empty, as long as you’ve played all legal words and all words are somehow connected you win the game. It takes less than ten minutes to play around, and the only scoring is binary: you win or you lose. No point-counting or anything. In the time it takes to play one short game of Scrabble, you can play five or six games of Bananagrams.

1. Clue — Truthfully, I never understood Clue. I love the movie, and to this day I think it’s the gold standard for movies based on board games (and will remain so for some time). But the game mechanic constantly confused me — moving around, finding stuff, and, worst of all, having to write down your choices for who did what when, which makes the game limited in terms of how many times you can play it (unless you buy additional pads or use plain paper… but plain paper is no fun).

Why not try… Betrayal at House on the Hill. This game has pretty much everything I like: the “discover the house at your own pace” metric of Mystery Mansion (probably one of my favorite games as a kid), the cooperative metric of Forbidden Island, the traitor metric of about a zillion different games, the fantasy/horror aspect, and a time limit. You start the game by choosing a character (which affects what you can and can’t do in the game) and then explore this house, building out the tiles and creating a maze and collecting stuff until a certain condition is reached. Then, based upon the condition, someone becomes the traitor and everyone else must work together to win — either the traitor is solely victorious or everyone else defeats the traitor together. The writers of the game did some great work with pacing for the second phase as well, and that makes it extra-fun. It’s not for all ages because of the horror aspect, but it’s absolutely worth a shot if you can get four or more people together to check it out. 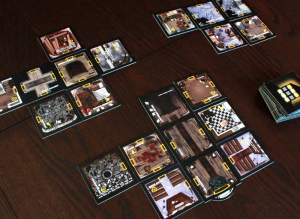 I obviously couldn’t put all my favorite games on here, but I wanted to mention Carcassonne and Alhambra, both of which are “create your own board” games. Carcassonne is a single board that all players play on, and you have four different types of meeples you can use to earn points; in Alhambra you create your own city, focusing on the wall pieces. Both are challenging, both are fun, and both have a time limit — when you run out of tiles, the game ends, so you can play them in 60 to 90 minutes (often faster if you’re good at them) and you don’t know when the game ends who’s going to win because there are scoring phases as well.

There’s a Carcassonne app that’s fun, if you’ve got five bucks to spare (plus a few more for the expansions, which make it even more interesting). You can also get app versions of Catan and Forbidden Island, which is a much cheaper way to try them out than spending a bunch of money on a board game you might not actually enjoy. Or just go to your friendly local game store and see who’s playing what. 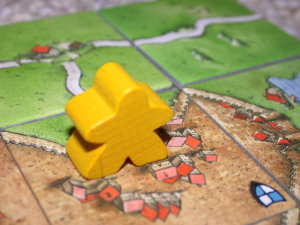