SIX OF THE BEST… weird dreams I keep having

I’m one of those people who starts dreaming almost immediately when I fall asleep — even if I sleep for only a minute or two. There are a few possible conditions or disorders that cause this: hypnagogia, which relates to sleep transitions (waking up and falling asleep); narcolepsy, which basically (and somewhat inaccurately) translates to “falling asleep at random times”; and idiopathic hypersomnia, which is narcolepsy but without the root causes.

Since what’s happening to me is SOREM sleep (sleep-onset rapid-eye movement), I’m pretty sure I have a form of type 2 narcolepsy or idiopathic hypersomnia. I haven’t had a sleep study done so I don’t really know which, but I do know that the condition isn’t causing me harm so I’m not exactly in a rush.

In simpler language: I dream a lot. And, lucky for me, I remember at least some of most of my dreams. I tend to have a lot of the same ones, too. Here are six of the weirdest, which I’m going to interpret with a combination of Dream Bible and Dream Dictionary. 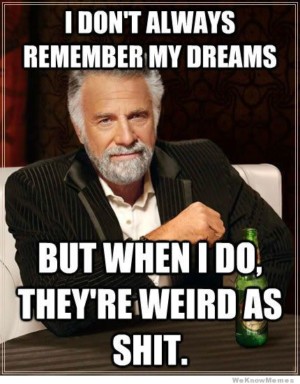 6. Pee dreams — I drink a lot of water. Like, a lot. My doctor says I should stop drinking about three hours before bedtime, because when you go to sleep your body processes all the leftover water from the day and it has to go somewhere. I have at least one pee dream most nights, and then I wake up and use the bathroom, as you do. But, annoyingly, my pee dreams also often include going to the bathroom in dirty, crowded, non-private, or unconventional locations, and oftentimes the urination is so forceful that (in my dream) it sprays everywhere. Not fun.

What does it mean? Apparently pee dreams represent a release of tension or negativity, and peeing in public means you’re saying “I’m owning my shit and no one else needs to get involved.” But in my case, I think they just mean I have to go to the bathroom. 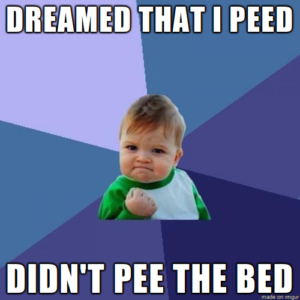 What does it mean? Ascending elevators tend to represent positive feelings about choices or actions. With me, the elevators are often going very fast, which could also mean I’m worried about a situation. I’m not sure that that applies to me because I’m not always worried about a situation… although maybe it could mean that I feel like soon enough someone is going to figure out that I’m all filler and no thriller. 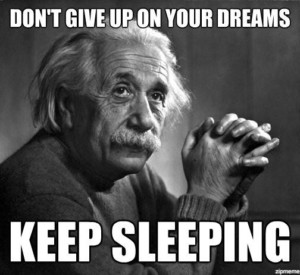 4. Yelling — This dream is very specific, and it’s one that I don’t remember all the details of. It has two main parts, and one of them is that my dad is either yelling at me or for me to do something (like when someone yells “hey, can you come down and help me with this?”). I can never quite make out what he’s yelling, only that he is yelling. I’ve had this dream pretty much as far back as I can remember. It’s not a nightmare — I never feel stressed out about it — but it’s not a favorite, either.

What does it mean? Yelling mostly represents anger or frustration — especially when you feel you aren’t being heard. I suppose as a young child we all feel like our parents don’t really hear us, and I think it persisted into adulthood because of some personal stuff going on where I didn’t feel like I was being heard or acknowledged. I’ve had it a lot less lately — and not once this year so far — so I’m thinking whatever was bothering me isn’t bothering me anymore. 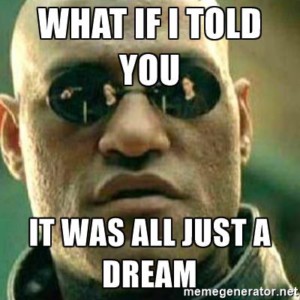 3. A blank space with two columns of trees, and a path between — This is the setting for the aforementioned dream. I don’t ever see my dad in it; I just hear him. But I’m always in a pretty empty area — like a blank space — and moving at some speed through two columns of trees. Sort of like this, but without the benches or anything outside the path.

What does it mean? Trees generally indicate that you’re thinking about a part of your life that is established — good or bad. I couldn’t find anything about blankness, but the color white is mostly about good intentions, even if those good intentions come with negative consequences — like being honest in a way that causes someone to get in trouble. It’s not really white in the dream, but an absence of anything around the area, so… ¯\_(ツ)_/¯. I don’t know how it all ties together; I only know that it does. Or maybe it doesn’t. Your guess is as good as mine. 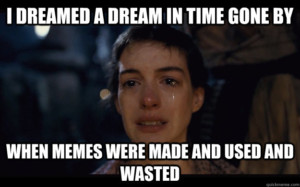 2. School dreams — These can be broken out into two main types. First of all is your typical “back to school” dream, except that I’m an adult returning to elementary or middle school to finish some classes I missed out on. The second type, though, is more interesting: I’m going back to school as a visitor, amid the students, and the school is designed differently — the layout is much more expansive and often somewhat neoclassical, there are a ton more students, and I’m never quite certain what I’m doing there but I try to go with the flow.

What does it mean? This one actually makes a little sense: school dreams represent anxieties, worries, or social concerns… and if you read last week’s column, you know I have some of those issues as fun little side dish to my main mental illness, which is depression. At least I’ve never had that “naked at school” dream, except in situations where it’s okay to be naked, like in the men’s locker-room after swimming in PE. But the interpretation there makes no sense at all, so I’m not even going to try to justify it. 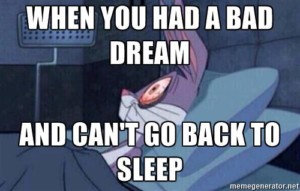 1. Sex dreams — Don’t worry, mom, I’m not going to get explicit here. Let’s just say, hypothetically, that every sexually active human has things they like and don’t like during a sexual encounter. Let’s say some of those things show up in my dreams from time to time. What’s interesting is that they usually take place in a room that has the furniture from my bedroom while I was growing up, but the current carpet my parents have in their house. I usually enjoy the sex dreams, but rarely do they end when I want them to; more often than not they’ll transition into some other recurring dream.

What does it mean? Sex dreams are said to mean that you have positive feelings toward the person with whom you’re having sex. Usually my sex dreams aren’t about people I know, but about archetypes of people. I guess that means I have positive feelings toward people in general, even though I often claim to be the opposite. I have occasionally had sex dreams where we were trying to find a place to do the thing, which means things in my life are being interrupted, but that’s not necessarily true as far as I can tell. Dreams that happen in bedrooms indicate that you’re looking for a place where you feel safe to express your private thoughts. 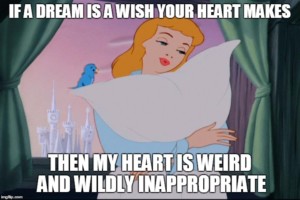 As far as I can tell, when you put dream symbology together, you usually end up with something less than optimal. Just look at the point I made about sex dreams; I usually enjoy them and wake up feeling pleased that they happened, but if you put together all the definitions you get conflicting answers or things that I don’t really feel apply to me.

But these weird dreams are, in a way, old friends of mine. When I have them, I know I’m dreaming, and it takes away some of the stress. I know more or less how they’ll end, and what the general shape of the dream will be, and while I can’t control it, at least I won’t get jump-scared.

Now if I could just figure out exactly why I have SOREM sleep without having to do a sleep study, that would be delightful. 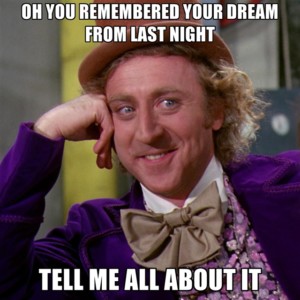 …said no one ever.