I’ve stayed at a lot of hotels over the past two years, and one thing they all have in common is that, at check-in, someone says something along the lines of “if there’s any way I can make your stay more comfortable, don’t hesitate to let me know.” Well, I assure you, if hoteliers looked at my six of the best ways to do that, they’d laugh, because almost no American hotels do this stuff (except the super-duper fancy ones). But they should. 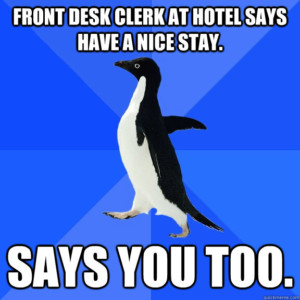 6. Fix the towel problem. — It doesn’t matter where you’re staying; your towel will always be the same one. It’ll be white, rough, too small, and not absorbent. It’s like all hotels get their towels from the same distributor. Even the resort I stayed in while in Mexico had the same towels (they were a tiny bit longer — 42 inches instead of 36. Even an in-shape person often can’t make a 36-inch towel work, and a preponderance of Americans are bigger around than 36 inches, so why do we keep doing this? (And yes, I know they’re rough because they’re washed countless times.)

Fix it by… How much is a decent towel at Bed Bath & Beyond? Ten bucks? Bring in some decent towels and sell them for $10 — or even $20 — at the hotel store. I guarantee you people will pay for them — especially if they’re staying more than a couple of days. And then, after that person checks out, throw the towel into the rotation with all the others. 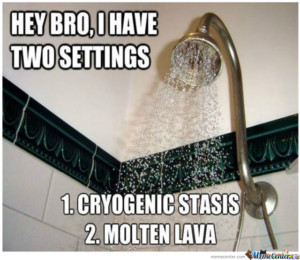 5. Stop modernizing the doors. — What’s wrong with a door that has a standard knob (or handle, if you want to get fancy)? Why can’t we just open doors the normal way? Why do so many hotels now have “modern” doors in the rooms? I stayed at a Sheraton last year that had a sliding bathroom door, which meant none of the steam from the shower or smells from the toilet stayed inside. I stayed at a La Quinta that has double-doors which “click in” at the ceiling level, so they’re super-loud to open. In Mexico, the glass doors to the shower and the poo room (a room with a toilet and nothing else) didn’t actually latch at all, they just “bumped” into place, again with no seals. And at a B&B in Tennessee, there wasn’t even a curtain around the shower — you just stand in the tub and try not to splash.

Fix it by… Go to Home Depot and buy some standard doors. Put knobs on them. Problem solved. I know that some hotels are remodeling to make their rooms more “efficient” (read: “smaller”) and swinging doors don’t always work, but for the most part, it’s possible. I mean, even if you want fancy French-door-style double doors, they can still latch in the middle. My house has three sets of those and they work fine. 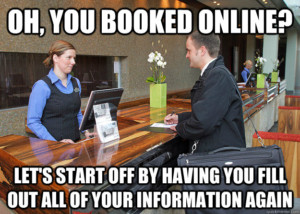 4. Don’t lie about the room. — I’m looking directly at “suite” hotels here. There are two kinds of hotel suites: the ones with a separate bedroom, and the ones that fake it by putting a tiny bit of wall jutting out between the bed and the sofa and call that part a sitting room. Or, worse, you can do what the Sheraton Atlanta Downtown does and call a standard room with one bed and a pull-out sofa a “junior suite”. Which is just BS; I stayed in a Doubletree in Palm Beach — standard room, two double beds — and it was almost twice the size of that Sheraton suite. And cost less.

Fix it by… Standardize what “suite” means in the hotel industry. It should mean “a room with a bedroom that is closed off by a door”. Embassy Suites does this. La Quinta does this. Melia Resorts does this. It’s not that complicated. Standardizing means you don’t have to peer at the hotel website or call and wait on hold for half an hour just to make sure everything is the way you want it. 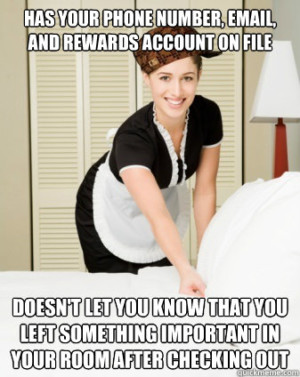 3. Add a streaming device to every TV. — I get it. I really do. You want people to buy their content from the overpriced hotel TV service that you’ve partnered with. But no one does that. Oh, and on that topic, stop putting those stupid universal remotes into every room; just leave the one that comes with the TV in the first place.

Fix it by… Instead of doing an expensive that no one will make use of partnership, go out and buy a bulk load of Chromecasts or Rokus or Amazon Fire Sticks. Even older models will do. Most people have access to at least one streaming service, and you need to make it easy for them to use it. Or, at the very least, make it convenient for guests to plug in their own streaming devices — both in terms of location and pairing with the wi-fi. 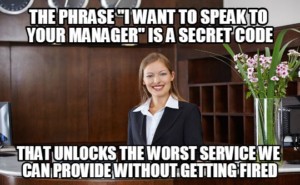 2. Make sure your guests can connect everywhere in the hotel. — Not every hotel has free wi-fi, and I respect that sometimes they have to charge for it. But whether you offer free wi-fi, paid wi-fi, or no wi-fi, you need to make sure that cell phone users can access some sort of communication grid everywhere in your hotel. Not to pick on the Sheraton Atlanta Downtown again, but while they do offer free wi-fi in the rooms and a really neat “text the concierge for service” option, if you’re in the convention area your only option is to buy wi-fi access. Last time I was there I saw so many people frantically trying to get access to their networks — and this was a convention where you’re supposed to be using your device.

Fix it by… Have someone come through and make sure your entire hotel can get on the four major US cell phone networks — AT&T, Sprint, T-Mobile, and Verizon. If you’re not going to offer free — and reliable, and usable — wi-fi, you owe it to your guests to make sure you’re not blocking the use of their personal devices. Especially if you’re hosting a convention. 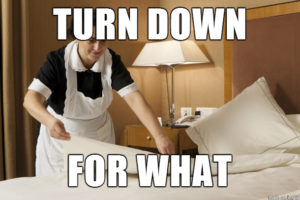 I laughed louder at this joke than I probably should have.

1. Free water. — Throughout most of the US, you really don’t want to drink the water coming out of the tap. In the mountains of New Mexico, it was safe (and tasty), but when you have a system that’s under the kind of load a hotel’s system faces every day, things can get a little weird, and you can usually tell that from the smell of the shower water (especially in Orlando). Soda machines have gone up in price, and going to the little hotel sundry shop is just as bad. Or you could drink the water from the courtesy bottles in the room, which is usually at least $2.50 apiece added to your bill.

Fix it by… You already have a water line feeding the ice machine. Split it off and put a water dispenser next to it. Filters aren’t super-expensive, and honestly I’d rather pay an extra $3 on my bill for filtered water than the $20 I’d pay to buy bottles. Or, I mean, buy bottles in bulk and put them in the rooms, and make them free to drink; I stayed in a hotel in Chattanooga that did this, and it was wonderful. They even had a little tag that said the water bottles were complimentary. 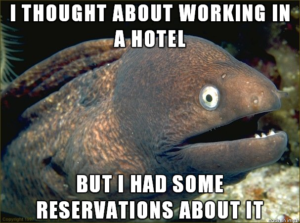 When I said I stayed in a lot of hotels over the past two years, I wasn’t kidding. Here’s a rating for all of them:

Dang. That’s one hotel every two months. Thanks, business travel, for all those airfare and hotel points! 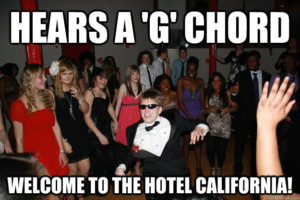 You can check out anytime you like, but you can never leave.