SIX OF THE BEST… ways to improve the flying experience

On Friday I’m headed to Florida to celebrate my mom’s sixtieth* birthday. Because of cost, we’ll be taking Spirit, a discount US carrier famous for its add-on fees and having the smallest seat pitch of all the major carriers at 28 inches. It’s only a two-hour flight, so I’ll deal, but I really wish Delta and Southwest (the airlines I usually fly) hadn’t been so expensive. 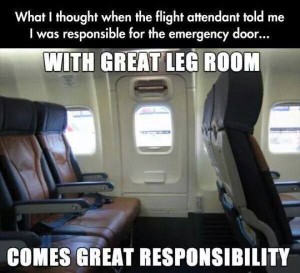 I’ve also been looking into international air travel because I’m going to be leaving the US for the first time this December. Where I’m going, the only airline we can really afford is Air France; everyone on SeatGuru says the seats are awful, but the cabin service is very good. It’s technically supposed to be Alitalia that we’d be flying on, but so many airlines do codeshares now that any flight at our price point is going to be Air France.

In my travels through the internet, looking up the best economy seats, I’ve discovered that US and (most) European carriers don’t even break the top ten. Now, I know the reason for that is profit — the more people the carriers can squeeze on a plane, the more money they make. But folks who have the opportunity to regularly fly on the top ten airlines, even in economy class, complain much less than American fliers do.

Here are six of the best ways US carriers could improve the flying experience:

6. Offer wider seats in premium economy. — Premium economy is all well and good when it comes to leg room, but the seats are still the same width. In fact, according to CNN, seat width has gotten an average of two inches narrower in the past twenty years. Even medium-sized people are uncomfortable; for those of us who qualify as fluffy fliers, such as myself, it’s almost impossible to sit comfortably while also not encroaching on other passengers’ space. It’s my number one complaint about air travel. I want to be conscientious and not disturb others, but the airlines have made it almost impossible. And even if I can arrange myself in my seat so that I don’t encroach on someone else’s chair, I still have to deal with keeping my legs out of other people’s space — another near-impossibility, given my height.

Or at least do this… Stop putting tray tables in the armrests, “slightly reducing seat width”. It makes taller fliers less comfortable when they spend extra money booking the bulkhead seats, and it decreases the value of said seats. I did fly in one of these seats last October, and I did manage to fit in it, but it was only a two-hour flight and by the end both of my hips ached — not because I weigh more than the average air traveler, but because I am built larger. My shoulders are the same way — broader than the average person of my height. Anyway, there’s got to be a better option than tray tables in the armrests — especially at bulkhead rows, when they could just be built into the wall. 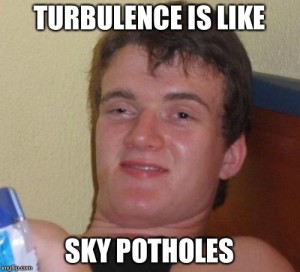 5. Improve the food options. — How much satiety do you get out of two Biscoff cookies, or two tiny bags of pretzels? Exactly none. At least in the days of peanuts it was possible to get some protein, but none of the airplane snacks I’ve been offered in the past decade (with the exception of peanuts, which are very rare) have had any. Protein and fiber make you feel full; salt just makes you thirsty, and then you finish your tiny drink in seconds. Also, maybe offer more than just snack service on flights over two hours that occur during a specific mealtime; the last time I flew from Atlanta to Seattle and Los Angeles, it was just snack service. Those are some long-ass flights — each one is five hours or more, not counting taxiing, boarding, and deplaning.

Or at least do this… Make the default “give the entire soda can to the passenger”. We’re paying hundreds of dollars to fly on your plane; don’t insult us by giving us a tiny cup. I’m looking at you, Southwest. 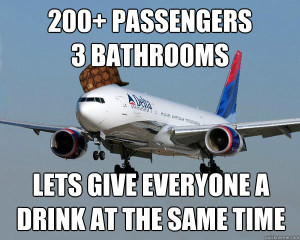 4. Let passengers pay for perks with miles. — While I certainly understand the major airlines creating low-cost options to combat Spirit and Frontier, and to a lesser extent Southwest (which, for my last three trips, has been the most expensive option), allowing members of their clubs (Skymiles, Rapid Rewards, $9 fare, etc) a free perk will go wonders for getting us to be willing to pay a little more. Skymiles gives you a free checked bag; maybe Rapid Rewards could get you the ability to check in 12 hours early, and $9 fare could get you a free carryon? Or, better, let you pick your perk. Most casual travelers don’t fly enough to earn enough miles to get free flights, but most of us do have just enough miles to look longingly at free flights from a far, far distance away. I’d gladly spend my miles on priority boarding, or seat upgrades, or checked bags.

Or at least do this… All airlines should allow you to pay for wi-fi with miles. This needs to happen immediately. 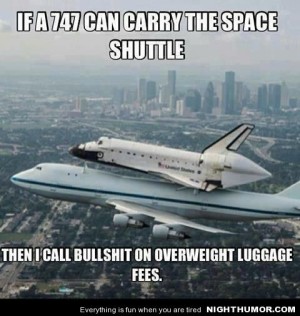 3. Better boarding procedures. — I know some people call it “cattle call boarding”, but I think Southwest has the right idea when it comes to getting people on the plane. Every passenger has a place in line, so there’s no clustering around the gate agent, waiting for a zone to be called. On every airline except for Southwest, that happens — even when passengers have assigned seating, which is basically every airline except for Southwest. I usually fly Delta, and I’m always in Zone 1, and still there’s a cluster around the gate agent that becomes a crawling, pushing, shoving mess as people try to get onto the plane.

Or at least do this… The reason for that mess is baggage fees. Now everyone has two carryons, so they need to board in time to get an overhead bin. Assigning overhead bin space by seat number (or even row number) would solve this problem really quickly. 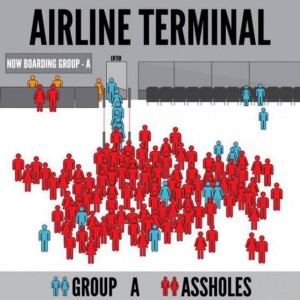 2. Better temperature control. — Look, we’re already voluntarily cramming ourselves into uncomfortable seats with no leg or ass room and no back support of any kind just to get places quicker; there’s no need to make us too hot or too cold all the time. But airplanes are always one or the other. And what do we get to regulate temperature? A tiny fan that blows right down on top of our heads, one that only really works properly when the plane is in the air. The fans don’t work nearly as well on the ground. That stuff needs to be corrected as soon as possible. And they need to not blow on top of our heads.

Or at least do this… Leave the air conditioning on and keep it cold. You can always add blankets or keep your jacket on, but when it’s too hot on a plane, there’s not much you can do. It may be chilly when the passengers first board, but by the time all two hundred people are on the plane, it’ll warm up nicely. 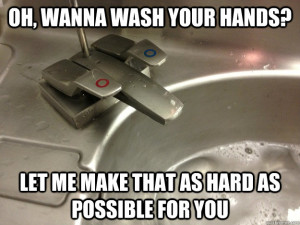 1. Air travel needs to be more kid-friendly. — This is already happening with the proliferation of video-on-demand services, as well as every kid having a phone or tablet, but it’s still a nightmare for families. Not just because the kids might explode at any moment, but because the rest of the traveling public automatically gives the stink-eye to families traveling with young children. Even if they themselves were parents at one point. If it means putting all the kids together, or having a few rows that are facing each other so there’s more room for the kids to get up and move around**, or even providing game-and-coloring books and crayons to every kid who boards, then so be it. I would spend my miles on a “kid ticket” premium that included a few perks for my daughter — not that she needs them; she just sits on her tablet the whole time. But the theory is sound.

Or at least do this… Every airplane needs at least one changing table. Ideally every airplane bathroom should have one. When my daughter was still in diapers, the only plane I ever flew that had a changing table was, strangely enough, owned by Spirit. I’ve never been on a Delta plane that has one***, and if Southwest has them, I wouldn’t know — I’ve never used the bathroom on a Southwest flight. But there absolutely, positively needs to be at least one, so that passengers don’t have to change their kids on the seats… or, worse, on the tray tables. 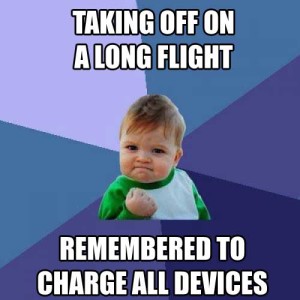 Speaking of tray tables, how often are they — and seats — actually cleaned well enough to get rid of all the germs? Probably not. Same with the seats, seatback pockets, and floors. Adequately cleaning a plane takes longer than the twenty to thirty minutes between flights. If instead each passenger was given a free packet of two or three antibacterial wipes, they’d wipe down their own seats and tray tables out of enlightened self-interest.

I’m actually rather surprised that airplanes don’t have linoleum floors yet. Much easier to clean than carpet. It would make it louder in the cabin, but most people have headphones in anyway, so does it really matter? The moment airlines figure out they can save money by using linoleum, every new plane will have it. 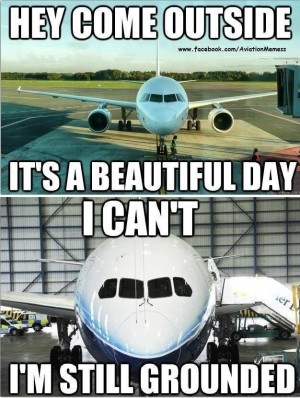 * That word sure looks weird when written down, doesn’t it?

** Anyone remember when Southwest used to have a few rear-facing seats on each plane? I tried sitting in one once, and it was super weird.

*** And yes, I have changed my daughter on the airplane seat. It was a three-hour flight; I had no choice.