SIX OF THE BEST… ways to improve your e-mails

This column got stuck in the queue, so it’s a bit late. Sorry.

I have this co-worker we’ll call Slater. Slater is the manager of a department that I work closely with, although we don’t report to the same people. Slater is intelligent, dedicated, hardworking, and, above all else, verbose.

Slater is an expert on tangents, which is to say that any conversation will go off in at least twenty different directions before eventually getting back to the original topic, which I’ll have forgotten about. This happens in person and in e-mail. Every e-mail from Slater is at least ten paragraphs long, with about that many screenshots and links, and by the time I get to the end I have no idea what Slater is talking about.

So I tend to ignore Slater’s e-mails and let other people jump on those grenades.

Don’t be like Slater. Make your e-mails better. Here are six of the best ways to improve them.

6. Summarize at the top. — Look, I get it. Sometimes we have to write really long e-mails that explain lots of technical jargon. If that’s the case, the best thing to do is to put a bullet-point summary at the very top of the message. That way the recipient can determine if it’s actually necessary to read the entire e-mail (if any of it is even relevant) and then mark it to be read later if there’s no time right now.

Don’t be like Slater. Slater never summarizes anything. Instead, the e-mails simply jump right in with the whole problem, usually in one huge paragraph that goes off on tangents before the first line is complete. Try to stay on topic. A summary helps. 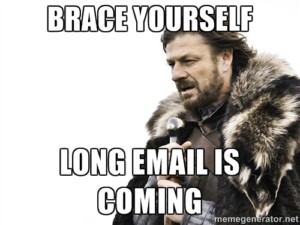 5. One subject per e-mail. — This one’s kind of difficult, especially if you’re writing an e-mail that asks for help with several different things. If Product A is malfunctioning in Ways X, Y, and Z, then you should send a separate e-mail for each Way. If you do that, the recipient can separate the threads and keep every conversation straight, and can also forward each thread to where it needs to go. However, if Product A, B, and C are all malfunctioning in Way Z, then one e-mail should be fine. The point is, try to keep your e-mails on topic — and limit the topic as much as possible — to keep the recipients from getting confused.

Don’t be like Slater. Slater will often see two or three problems with two or three products used regularly and just submit one e-mail with all the issues stuck together. Slater won’t label the screenshots by name, and there won’t be any transitions between problems. And that’s in addition to all the tangents that I’m treated to. 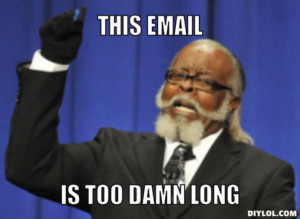 4. Avoid tangents. — I don’t care what your current e-mail makes you think of in addition to the main subject. Don’t bring it up. I fully admit to doing this when e-mailing with my ex-wife, and she does it right back to me. One or both of us will be in the middle of an e-mail thread about child care or school meetings and we’ll add in something like “hey, by the way, what about next Saturday, do you have an answer about Issue X?” Not only does this confuse the issue, but it also makes it harder to search e-mail records because the subject line may not reflect the content.

Don’t be like Slater. “Here’s ten paragraphs about Problem X in Project A, oh and in paragraph eight I’m going to diverge for six sentences about Problem W in Project J, so that you don’t forget about that.” Maybe that works in conversation, but not in e-mail. 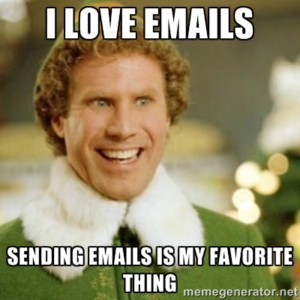 3. Keep it brief. — While e-mails certainly can be used to communicate difficult or complex concepts, the human attention span, especially in the west, has gotten shorter every year — maybe even every day. If your e-mail is too long, no one will read it. And the same goes for your paragraphs; four lines, tops. Be aware of the font you use and how it’s going to be seen on another user’s screen, and if you’re not sure, shorten your e-mail and your paragraphs even further. Kill your darlings, as the writers say.

Don’t be like Slater. For Slater, eight-to-ten-line paragraphs are the norm, and the e-mails are always at least two pages long, not including screenshots. Slater’s support tickets are even worse because in those instances the screenshots aren’t inline and Slater doesn’t realize it until the e-mail to the ticketing system is sent. 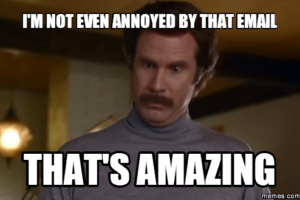 2. Shorten signatures. — I don’t care how big and important your role is at your company. You only need to put three things in your signature: your name, your role, and your phone number. The recipient can get everything else in other ways. For example, let’s say I sent you an e-mail as a columnist. My signature might be:

Don’t be like Slater. Actually, in this case, do be like Slater. Slater’s signature is just “Thanks, s”. Clearly Slater subscribes to That Guy’s Universal Law of E-mail Signatures, which states:

The larger (file size, font, or length) an e-mail signature is, the more insecure the e-mailer perceives him/herself to be. 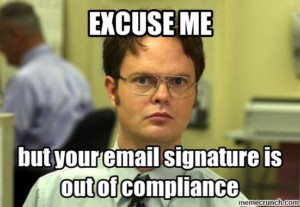 1. Subject lines, not “important” buttons, should indicate importance. — Once upon a time, the “important” button in Outlook was used to indicate when an e-mail really was high-priority. Now people use it willy-nilly, and as a result, you have e-mail subjects with headings like “PLEASE READ: important message about Product A”, or, worse, subject lines in all caps. This happens most often when internal e-mail blasts are sent, such as “JUPITER SYSTEM GOING DOWN AT 2PM TODAY FOR MAINTENANCE”. Which brings up another important point: don’t put your entire message into the subject line. I realize no one reads important e-mails, but if you put it in the subject, you’re just becoming part of the problem. Only use “important” when really necessary, and resist the urge to say “PLEASE READ” in your subject line.

Don’t be like Slater’s counterparts. Slater has counterparts at all of our satellite offices. Recently I did a system audit and updated almost everyone’s access level to a system that I administer. I sent out an e-mail one week in advance titled “System Audit: [your location here]”, and wrote a brief e-mail where I boldfaced the date on which the access level would change. Then, the next week, I sent a follow-up titled “System Audit: [your location here] — Complete”. But until the users logged into the system, they didn’t know I’d made any changes because my e-mail subject didn’t say “IMPORTANT, PLEASE READ” and I didn’t use the “important” button. Slater replied to me the very same day I sent the e-mail to our local office, but none of Slater’s counterparts figured it out because I don’t believe in artificial importance inflation. 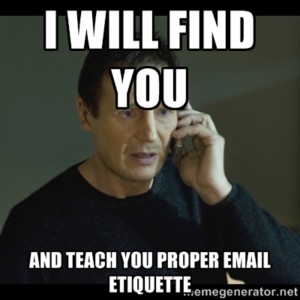 Good morning. Here is a thing that I must tell you about this other thing. Here is some other information you need to know.

However, more and more often businesspeople — even directors and vice presidents — are sending e-mails with a salutation of “Hi, Slater” or “Hey Slater”. Then the first line is “Hope everything is going well.”

That stuff drives me up the wall. It’s not professional, and it makes senders — at least in my eyes — look like they don’t care, or at least that they don’t have their full attention on the problem.

At my old job, I refused to do this, and my boss decided the way to get me to do it was to micromanage me to the point where she physically approved all of my e-mails to anyone who, in her words, “might think you’re being too brusque, which would damage our team’s relationship with them”.

Which was BS. Everyone I e-mailed knew me well enough to know that I’m not brusque in work conversations. I’m friendly and engaging, and also self-deprecating. I get along with almost everyone I work with — even Slater. But that boss thought less formality was the most important thing. As my boss, that was certainly her prerogative.

At my current full-time job, no one micromanages me, I send e-mails the way I believe is best, and everyone knows that when they work with me I’m not going to mess around and waste time.

So if you feel it’s absolutely necessary to open your e-mails “Hi” or “Hey”, go for it. But I never will. I’m just not wired that way. 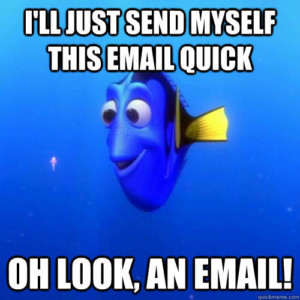 * Or you could just join the 21st century and send secure forms, you luddite.