I bought my tickets to see the live-action Beauty and the Beast last week. The animated version is my wife’s favorite movie, and since we have a busy weekend ahead we figured we’d make a date night of it.

I’m sure that by tomorrow night most of these will be moot, but I figure it couldn’t hurt to offer my list of six of the best changes Disney could make to the tale as old as time. 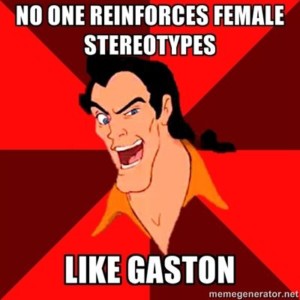 6. More details on how the Beast came to be. — What exactly possessed the enchantress to “test” the prince in the way that he did? Why would she disguise herself? Why not just say “hey, I’m an enchantress and I need shelter for the night, can you help me out?” If the prince was still a little jerk about it then fine, curse him, but don’t trick him. That would make more sense to me, and I’d like to see that change in the new film.

And on that note… Where were the prince’s parents? You can’t be a prince without parents who are a king and queen, right? Would he have even answered the door? Isn’t that what servants are for? 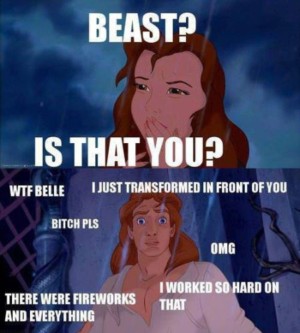 5. A little backstory on Gaston and LeFou. — This is a smaller point, but I’m curious as to how LeFou became Gaston’s right-hand man. It might just take a couple of lines in the script, but I’d really like to know. Even if it’s something simple.

And on that note… LeFou has to know that Gaston is kind of an asshole, right? I mean, back in Ye Olde Dayse, it was okay to glorify assholes, but LeFou clearly knows exactly what’s up with Gaston and he still goes along with it. What happened in LeFou’s past to make him a yes-man to a guy like Gaston? 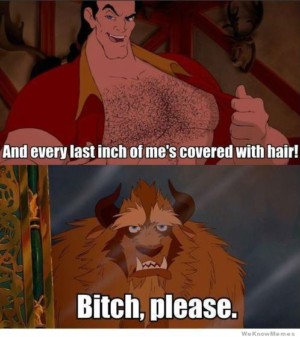 4. More dimensions to Gaston’s character. — In the original, Gaston is a very flat antagonist. He wants to marry the prettiest girl in town, and once she shows she cares about someone else he wants to kill that other person. But it’s 2017; we need more interesting antagonists. Maybe give Gaston some insecurities. Maybe he’s pressured by his father to continue the family line. Maybe he once fell in love with an “ugly” girl and the derision changed him. Give us something.

And on that note… It would be kind of cool if there was a vague undercurrent in town that they’re getting a little tired of Gaston’s antics, but because he’s rich and powerful they put up with him. 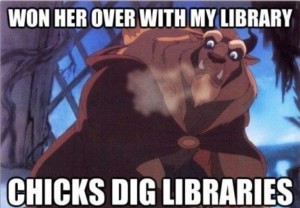 3. Acknowledge the Stockholm Syndrome aspect of the story. — It’s literally “prisoner falls in love with captor”. That may work as a fairy tale, but again, this is 2017 and we need more from our stories. I can’t think of a non-cliche way for this to be fixed, but I would appreciate it. Belle is an intelligent girl — I mean, she reads books instead of doing hard work, so she must be, right? — and surely she knows what’s happening.

And on that note… Some acknowledgment of the Beast’s abusive behavior would be good too, given the changing audience and the things they go through. He seems all nice until Belle goes against him, and then he explodes at her or locks her up. That has to be triggering for some people. Yes, the Beast eventually changes his ways, but in the beginning he’s not very nice. 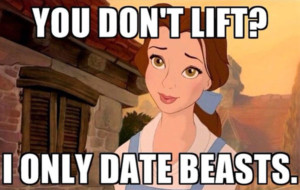 2. More details about the prince. — Speaking of the Beast, before he was turned, what exactly was he the prince of? Of the little town where Belle and Gaston and the others live? Of somewhere else? If he’s within walking/riding distance of the town, he probably rules it (or his family does). I’d really like to know.

And on that note… For the sake of argument, let’s say that the prince ruled the area where the town is located as part of a small kingdom. What happened when he got turned? How did the town find out and establish an alternate form of government? What’s going to happen once the Beast is human again? Does he just take over? Inquiring minds need to know. 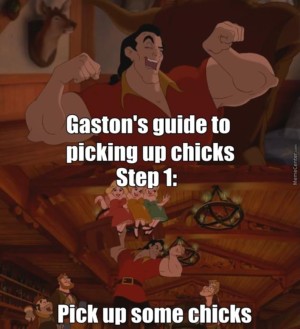 1. Define how magic works in the story. — It’s clear that magic is a thing in the world of Beauty and the Beast. I can accept that as part of the worldbuilding. But the only magic we see is the curse, the mirror, and the changing of the household staff into living objects. No one else uses potions or spells to do anything; Belle’s father is an inventor, so clearly science is also a thing in this world.

And on that note… Maybe this is my fanfiction-friendly brain kicking in, but I feel like Belle, as an intelligent young woman, would find a way to learn more about magic. She would hire someone to do it for her, or figure out how to do it herself. And the Beast’s library would probably have some magic-related books in it, given that he knows how he got into his condition. Magic just isn’t consistent enough in the story to work for me. 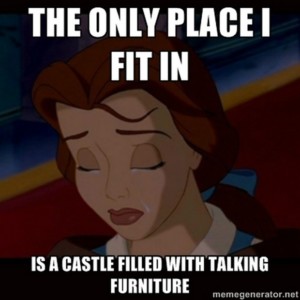 I really enjoyed Moana, and I got a great kick out of the fourth-wall breaks — like when Maui tells Moana she’s a princess because she wears a dress, her father’s a chief, and she has an animal sidekick. In general I do enjoy fourth-wall breaking, when it’s done well and in a limited fashion.

Netflix has been getting a little indulgent about it of late. Fuller House is chock-full (chock-full-er) of acknowledgments of the audience and the real world. A Series of Unfortunate Events literally calls out the fact that they’re a show on a streaming service multiple times in its run, and I’m not just talking about Lemony Snicket’s narrations. It’s gone from being funny to being twee… or just annoying.

So I really hope that Disney is more careful than Netflix has been. Moana had just the right amount. Don’t overdo it.