The more you practice, the better you tend to get. Sports, art, whatever. I’ve been writing this column for almost four full years, and I feel like my work has, on the whole, improved. Maybe not all the time, but no one’s awesome all the time.

For the past three years, I’ve published a column containing my best-ofs for the previous year. But this year I’d like to try something different — firstly because “year’s best” posts are passe, but also because I don’t think I can narrow 52 weeks of columns down to six favorites. So, with that in mind, here are six of the best types of columns I wrote in 2017. And, just to make it different, I’m starting with the best and working my way down. 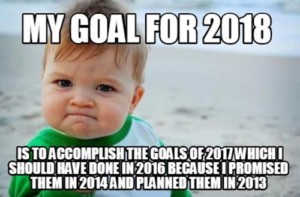 1. Mental Health — Although I’m not a physician of any type, I suffer from mental illness. I treat it with medication, therapeutic techniques, writing, and occasionally just breaking down into sobs and/or screams. It’s super fun, really. As a result, I often find myself writing about mental illness, coping strategies, and triggering issues. This year I think my best work came around my birthday, which for me is a triggering event — I usually get upset or depressed around that time of year. I shouldn’t; nothing bad really ever happened to me on my birthday, except for one year when I was sick (I think I was turning twelve). But mental illness rarely makes sense, and sometimes I turn to my column to make sense of it.

Unhappiness is a part of life, and it’s something we all have to deal with. But we don’t have to reinforce it; remember, the US Constitution guarantees “life, liberty, and the pursuit of happiness” — and that’s what happiness is: something you have to pursue. Unhappiness happens when you don’t pursue happiness. So go forth and pursue. 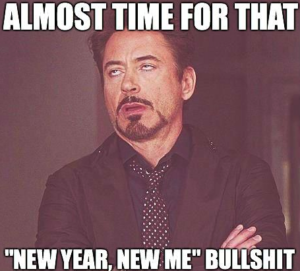 2. Writing — Writing a column every week* for four years has forced me to keep putting out words. If you assume that each column is 1000 words long, that’s literally more than 200,000 words since I started this little experiment. All writers turn their gaze inward from time to time, and when I start to inspect my navel, that’s when it’s time for me to write about writing. At this point I have more than a dozen columns containing what I generously call “writing advice”, although of course other writers’ knowledge may vary. Still, I like to think I maybe helped out a little bit.

And that’s another benefit to writing by hand: people have no idea what I’m writing until I’m ready to share it with them. They can try to figure it out, but it’s not easy. Of course, it’s not easy for me either, but given how much I’ve written in the past two weeks, I think it’s worth the trouble. Plus, I can see how excited I am about a part of the story because the handwriting gets even worse, and the more sections there are like that, the better the story is. In my opinion, anyway. 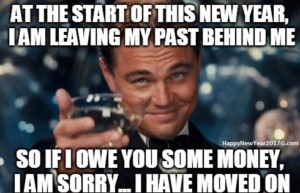 3. Gadgets and Games — As nerds, we often find ourselves beholden to the latest technological fads — our new phones, drones, dashcams, Raspberry Pi, whatever. Even fidget spinners. The same goes for games; when we get a new game we play it over and over until our friends and family are sick of it. I played a ton of Ticket to Ride last year; hence there being an entire column about it. I also got a new phone and a fidget spinner. Pretty easy to write about things you do a lot, I think.

Everyone’s coping mechanisms are different. Sometimes you just have to accept that and move on. And for those people whose coping mechanism is to spin a fidget spinner, well… it’s cheap, it’s quiet, it’s not hurting anyone, and it just might help. Of course, figuring out who’s doing it because they need to and who’s doing it even though they don’t need to is another story, and I feel for anyone — especially teachers — who is put in that situation. I understand why they are banned at certain schools or in certain classrooms, but sometimes a blanket ban isn’t the answer. (Unless it helps improve standardized test scores, in which case administrations are like BANINATION!) 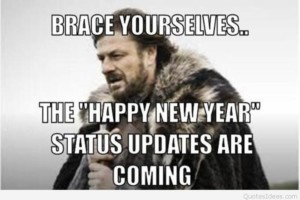 4. Genre TV and Film — There’s always something new on TV — streaming, cable, whatever — and it seems like at least every other week there’s another movie out that falls into one of the nerdy genres (sci-fi, fantasy, horror). It’s a fallow field, but the problem is that a lot of them are basically the same film (or show), with the same story beats. I’m reminded of Save the Cat, which it seems like every screenwriter has read. So I guess if everything is the same, then I can just rewrite the same article over and over and just change the details, right?

You have to have stakes that count. Otherwise why should we care? And, ultimately, I think that was the main problem with The Defenders: I didn’t care about any of the stakes, and that made me see all the problems with the show. 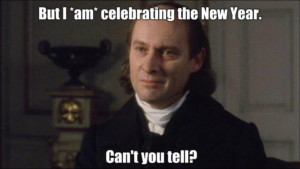 I don’t get this one…

5. Genre Books — Everything I just said about genre TV and film? The same for books. I read a lot less this year than in previous years, I think because I kept getting sucked into social websites and communities at night instead of opening up my book apps. I really should change that for 2018. That’s why none of the three articles here are about books that came out in 2018, or even 2017. 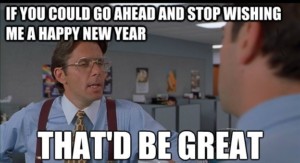 6. Everything Else — When I first started writing this column, my editor gave me some pretty simple direction: keep it nerdy. So when I write something that might not be, I try to aim it in that direction, at least tangentially. I had a few columns this year that weren’t really applicable (conference calls, email signatures, weird dreams), but for the most part I think I did okay. Still, some of my intentionally-nerdy columns didn’t fit into any of the previous categories, so they’re here. (I put the Cardassian one here because it’s about philosophy, not about Star Trek per se.) 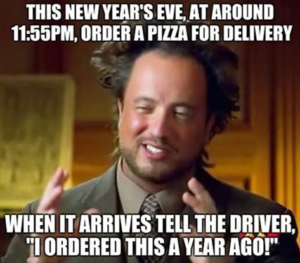 I’m sure they’ve NEVER heard that one before.

A couple of months ago, I got one of those signs with the movable letters. It was 50 percent off, and may have been the most fun purchase I made last year. I put it up in my office and I’ve been changing the text every week or so. I can’t show you all of the images, because some of them contain information about work, but here are two good ones: 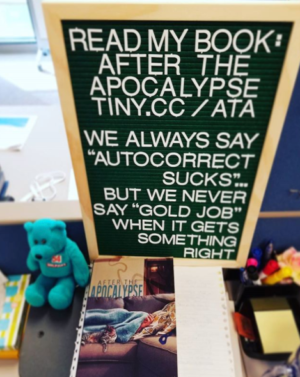 Yes, I’m constantly advertising my book, even at work. 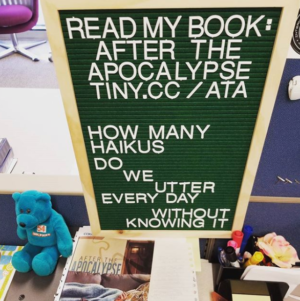 By the time I figured out I had the spacing wrong on the last two lines, I was too lazy to change it.

And yes, I borrowed them from /r/showerthoughts. I’m clever, but not always that clever.

Memories of My Father is the story of a girl trying to figure out why her dad’s losing his memory — but the horrible secret causing it leaves her only one way to save him: to forget everything she knows. K.T. Katzmann, author of Murder with Monsters, says: “It gets to the science-fictiony widget early, points it out for the audience, and goes right back to tearing apart the reader with emotional human drama.” And if that doesn’t make you want to read it, then what more can I tell you? Get your copy today, while you still remember what last year’s columns were about.

* To be fair, I write a lot of them well in advance and then schedule them for later. But the theory is sound.