I can tell I was starting to lose my momentum in this 30th-anniversary celebration because, in my notes, I wrote “write something here”. Honestly, writing four columns in a row is tough (I wrote them all a month or so in advance), and it was made worse because each time I glanced to the right, to look at Twitter, I saw a tweet about yet another stupid thing done by Trump that makes me think just how much farther we’re distancing ourselves from a Star Trek-like world with every day that that idiot is in power.

So, with that happy thought in mind, here are the six best TNG episodes. In my opinion. 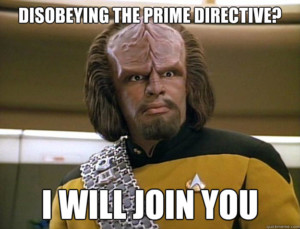 6. I, Borg (5.23) — The Enterprise happens upon a crashed Borg scoutship. The away team brings the survivor aboard and begins restoring him to health, and in the process learn a little something about themselves. In the end, they must decide if he’s going to carry a computer virus that will kill all the Borg (via genocide) or just go back as an individual — which could be even more damaging.

Hugh: Resistance… is not futile?

Some of the best science fiction ever written holds a mirror up to ourselves and shows us our greatest flaws… as well as our greatest strengths. Up until now, we’d only experienced the Borg as a faceless, soulless, unstoppable assimilating machine, but as Hugh became more and more of an individual, we had to stop and remember that he’d once been a person. Each character who interacted with Hugh was another facet of the viewership: Geordi’s idealism (later echoed in Vendetta), Beverly’s “he’s an injured being” mindset, Guinan’s hatred-turned-understanding, and finally Picard’s pragmatism. In the end Hugh was allowed to return to the Collective without having the genocide virus implanted, but as Admiral Nechayev later says (and I’m paraphrasing), did Picard really make the right decision? Would it have been worth it to kill one person you know just to stop an onslaught that could kill every human in the galaxy without stopping to blink? 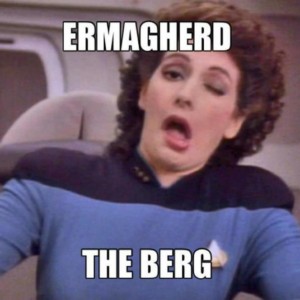 5. Cause and Effect (5.18) — The Enterprise explodes. A lot. It eventually turns out that the first time it blew up it threw the ship into a temporal causality loop, and the crew must find a way to break the loop or be stuck repeating the same 24 hours (or so) forever.

Okay, seriously, how do you top a cold open where the ship blows up? I remember my dad and me watching that part, turning to each other, and just being completely speechless. The mystery was unfolded very slowly, as it was in “Clues”, and each time around the loop both the audience and the crew put together more and more of what was going on until, finally, Data managed to send a message to the next iteration of himself. In some ways I felt like the Dr. Crusher parts were the weakest in the show, as if they existed just to give her something to do, but taken in the grand scheme of things I really couldn’t complain. When I first saw this episode, it shot right into my top ten, and it’s stayed there pretty much forever. (But for some reason, neither my wife nor my kid liked this episode. I guess it’s not for everyone. But it is for me, and this is my column, so there.) 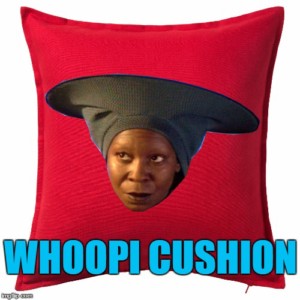 4. Parallels (7.11) — On the way back from a bat’tleth tournament, Worf passes through a temporal anomaly that begins shifting him sideways through various possible universes. While nothing really bad is happening to Worf, per se, he still wants to get home to his own universe. Eventually the Enterprise that he’s on figures out that (a) Geordi’s visor is causing Worf to jump sideways and (b) there’s a way to fix everything. Something goes wrong, though, and Enterprises start appearing around the anomaly. A lot of them.

This is my favorite Worf episode, and my favorite 7th season episode, and as you can see it’s in my top five. In fact, I even wrote and submitted a story to the Strange New Worlds anthology contest that was held some years ago. It was based on this episode, and also on some of the original casting sheets for the show, and also on “Tapestry”. It didn’t win, but I had fun writing it. Anyway, this episode, like “Yesterday’s Enterprise” and “Cause and Effect”, takes place on the ship and explores alternate universes and timelines, both things that I really like. In addition, the small details aren’t actually explained — they’re just there. It makes the episode more immersive and stronger as a whole because we as viewers are treated to all of these details that everyone (except Worf) takes as normal. I truly believe this episode deserves its spot in my top five, and honestly, although it’s only number four overall, I probably would pick this one to watch right now if you held a phaser to my head. I like it that much. 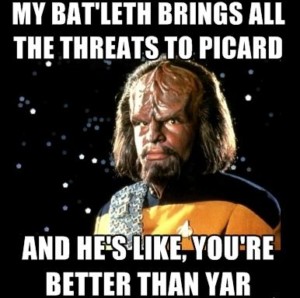 My daughter has this on a t-shirt. I am amused.

3. The Inner Light (5.25) — The Enterprise comes across a probe and, when they scan it, it possesses Captain Picard and he is somehow transported to the planet Kataan, where he lives the life of a man named Kamin. Only minutes pass on the ship, but on Kataan decades go by. Kamin has a wife, children, friends, and eventually is part of the team that sends the probe into space because all life on the planet is going to cease due to ecological factors.

Eline: Remember… put your shoes away.

As with “The Measure of a Man”, I know this is a stellar episode, but it’s not one of my personal favorites. Sure, it was well-written and allowed Patrick Stewart to stretch his acting muscles (and get off the ship for a while), but it seems to be on TV a lot and I’m kind of tired of seeing it. The old-age makeup is pretty awful (especially given how well Patrick Stewart has actually aged), and Kamin-as-an-old-man doesn’t seem to explore any new ground. However, the fanfic-y element of someone being transported from their life and into another’s and having to learn about the new world and fall back in love with someone who’s supposedly his wife definitely appeals to me. This is definitely one of the best episodes of TNG, regardless of my personal feelings. 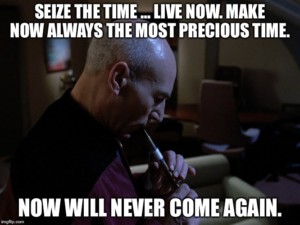 2. Darmok (5.2) — The Enterprise makes contact with the Tamarians, an enigmatic race that the Federation has never been able to fully communicate with. In an attempt to get their peoples to see eye-to-eye, the other captain beams himself and Picard down to a planet. While Riker and the crew try to talk to the Tamarians, Picard and the other captain, Dathon, must work together to fight a common enemy and learn how to communicate.

Dathon: Darmok, and Jalad… at Tanagra.

This episode marks the first appearance of Picard’s new jacket, which I know my wife hates, but I think it looks kind of cool. The episode itself was probably one of the best in all Trek anywhere. It was at once about communication and understanding (something stressed by Roddenberry) and also had action and adventure (both in space and on the planet). Not only did Picard and Dathon have to work together — both to make each other understood and to stop the inviso-beast — but the crew of the Enterprise had to work together as well. If I have a criticism of the episode, it’s that when the crew finally figures everything out it just feels forced and a bit campy the way they tell the stories to the Tamarians. Still, this is what Star Trek should be about: seeking out new life-forms and new civilizations. 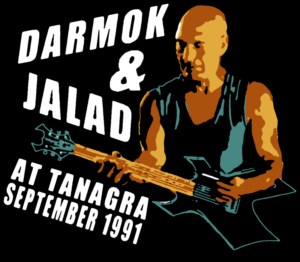 1. The Best of Both Worlds (3.26/4.1)– The Borg are back. Commander Shelby, Starfleet’s expert on the subject, comes aboard the Enterprise and makes waves. The Enterprise finds the Borg ship and attempts to stop them, but they kidnap Picard and turn him into one of them. When Riker’s plan to destroy the Borg achieves Epic Fail — as does Admiral Hanson’s — the crew re-kidnaps Picard in an attempt to use him to infiltrate the Borg and stop them that way.

Locutus: I am Locutus of Borg. Resistance is futile. Your life, as it has been is over. From this time forward you will service us.

I really do think that Part 1 was far better than Part 2 — I mean, how are you going to top Picard being turned into a Borg and Riker telling Worf basically to blow him to hell? You certainly don’t do it by spending the first 15 seconds of the conclusion building up the power to destroy your opponent. I don’t think there’s anything I can say about this episode that hasn’t already been said by countless commenters, but I will tell you that my dad and I disagreed on what would happen, and said disagreement lasted all summer. He said Picard would either die or become an admiral, and that Riker and Shelby would remain Captain and First Officer of the Enterprise. I don’t remember if he thought that Riker’s deflector beam would work or not. I, on the other hand, was absolutely certain that Picard would be back and the good guys would win the day. At the time, I wasn’t as well-read as my dad was, and as someone who’d been reading sci-fi and mystery and spy novels for more than twenty years, he had a greater breadth of knowledge to guess what might happen. I, being twelve, could only go with what I knew, and all the media I’d consumed by then had had easy endings — the good guys lived, the bad guys either died or got their comeuppance, and I was blissfully unaware of the concept of the anti-hero. In any case, we both made the Season Four premiere appointment viewing, and while I was technically right, I don’t think I would’ve minded if either of my dad’s predictions came true. 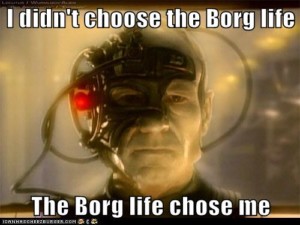 Make sure to visit my website tomorrow; I put together a fun TNG episode quiz. In the meantime, here’s my complete top-25 list, from 25 to 1. 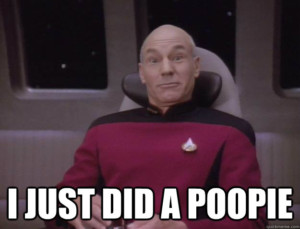 And, lest you think I’ve changed at all, here’s a poop joke to end the anniversary celebration.