This post doesn’t need much introduction. I mean, what would a 30th-anniversary celebration of TNG be without a top episodes list? Here’s the first part of mine. 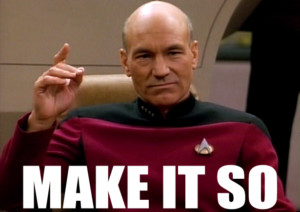 12. Conundrum (5.14) — An alien race looking to obliterate its longtime enemies wipes the memories of the Enterprise crew and installs one of their own as the new first officer, as well as false computer records indicating that the Federation is also at war. But when the ship gets to their opponents’ main command base, they start to realize that something is amiss.

This episode will forever be known as “the one where Riker boinks Ensign Ro”, but at least it happened organically. Anyway, the memory-loss/fish-out-of-water concept is a good one in fiction — our established characters lose their memories and have to figure out exactly what they do, and it’s up to us as the viewers to see where they gravitate to. Once the crew got their memories back, it was more like a post-trauma situation where everyone (seen through the Ro/Riker/Troi triangle) has to deal with the consequences of what happened. Also part of this trope: the fact that even though you don’t know something’s wrong you still don’t act “badly”, as evidenced by Picard refusing to fire on the command base. One wonders why we’ve never heard from these races again, but then, this was TNG, and everything was resolved in 45 minutes (for the most part). 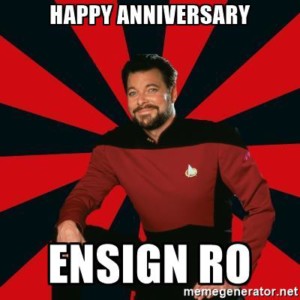 11. Datalore (1.13)– While in the neighborhood, the Enterprise visits the planet where Data was found 26 years ago. A latent memory kicks in and Data opens a doorway to the underground portion of the colony. The crew finds evidence of the thing that destroyed the colony and killed everyone… and they also find a disassembled android that looks a hell of a lot like Data. It turns out to be Data’s brother, who wants nothing more than to reconnect with his friend, the Crystalline Entity, and kill everyone aboard the Enterprise.

Wesley: Have you got a cold?
Data: A cold what?

In addition to giving us a ton of backstory on Data — arguably the most popular character on the show, even in the early days — it also allowed Brent Spiner to show that he can do more than just be an emotionless android. It introduced the Crystalline Entity, later to return in “Silicon Avatar” and the novel Orion’s Hounds, and it gave us Lore, a thoroughly unlikeable villain who somehow we still wanted to be redeemed because, you know, he’s Data’s brother. Though there were some silly and clunky parts — the stuff with Wesley, Beverly’s arm being on fire, the off-switch — it was overall a very strong episode in a premiere season that had already dealt with such bombs as “Code of Honor” and “Justice”. 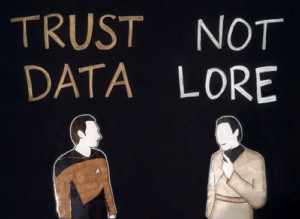 10. Disaster (5.5) — The Enterprise is just derping along, doing its thing, when it hits a quantum filament or cosmic string or some such technobabble speedbump. It causes the entire ship to be disrupted. Picard and three kids are trapped in a turbolift; Deanna, O’Brien, and Ro are stuck on the bridge; Worf and Keiko are in Ten-Forward; Geordi and Beverly are in a cargo bay; Riker and Data are trying to get to Engineering. While Picard tries to keep the kids safe and Worf assists Keiko in delivering her baby, Geordi and Beverly have to find a way to put out a plasma fire before they die of radiation poisoning. Meanwhile, up on the bridge, Deanna and company discover that the warp core is going to breach unless someone in engineering can stop it. It just so happens that Riker and Data are on the way there… if only someone could tell them what they needed to do.

Patterson: Can I be an officer, too?
Picard: Well let me see, uh, your science project involved radishes, did it not?
Patterson: Yes, sir.
Picard: Then I shall appoint you my Executive Officer in charge of radishes.

Half of my top-ten episodes come from the fifth season, and it truly was a great one (except for the season finale). This episode was no exception. The writers got the entire crew a little screen time, put everyone in peril, added comic relief in a few places, and really made us think that the Enterprise might not come out of this one unscathed. It allowed everyone to showcase all their various and sundry talents both as actors and characters, and it did a fair bit of fish-out-of-water as well to show how versatile Starfleet officers really are. This is one episode I’ll always watch when it’s on. I wish I could rate it higher, but despite being one of my favorites, it’s only the tenth-best overall. 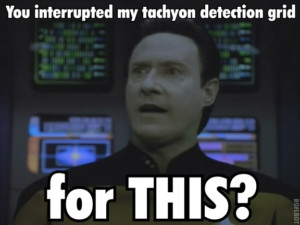 9. The Measure of a Man (2.9) — A Starfleet scientist wants Data remanded to his custody so he can study him and hopefully produce more androids like him. Picard objects (as does Data), because Data is supposedly a sentient, sapient being. A trial occurs to determine if Data has free will.

Captain Philippa Louvois, to Picard: It brings a sense of order and stability to my universe to know that you’re still a pompous ass… and a damn sexy man.

There are a few episodes that I kind of felt forced to rank more highly than I’d like, and this is one of them. Not to say that it’s not a great episode, because it is — heavy-handed comparisons to slavery aside — but it seems to be on a lot of top-ten lists, and I like to avoid the consensus whenever possible. Maybe it’s the contrarian in me. But I can’t deny that this episode, while being basically a courtroom drama, still managed to be tense and powerful, and when Riker really had to go all-out to fight against Data and Picard, I think Frakes sold it exceptionally well. In some ways, he had to communicate much more difficult concepts to the audience than Patrick Stewart did, and for that he deserves special mention. 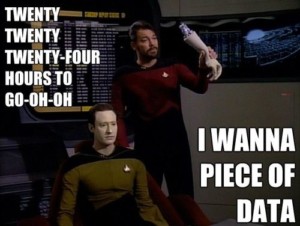 8. Q Who (2.16) — Making use of the “Enterprise slowly spinning in space” special effect, Q sends the ship thousands of light-years away so they can meet the Borg, an enemy unlike anything they’ve ever faced, and one they have no chance of defeating.

Q: If you can’t take a little bloody nose, maybe you ought to go back home and crawl under your bed. It’s not safe out here. It’s wondrous, with treasures to satiate desires, both subtle and gross. But it’s not for the timid.

The concept that there’s an enemy out there that our heroes can’t defeat is a frightening thing. They’re coming, and there’s nothing we can do to stop them. The only way the Enterprise survived was because Q used his powers to send it back to where they started the adventure. The Borg would later become one of the most compelling villains on the show, and would lead to several strong tie-in novels, including Vendetta by Peter David and the Destiny trilogy by David Mack. And, as we learn about a year and a half later, simply firing phasers won’t be enough to even slow them down. 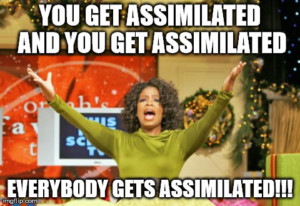 7. Yesterday’s Enterprise (3.15) — A space-time portal pulls the Enterprise-C 25 years forward in time, preventing it from being destroyed while saving a Klingon colony that was attacked by Romulans. As a result, the Klingons and the Federation never made peace, and now, 25 years later, the Federation is about to lose the war, unless the crew of this reality’s Enterprise-D patches up the old ship and sends her and her crew back to die. And the Klingons are on the way…

What is there to say about this episode that would tell you why I liked it? It had almost everything I enjoy — bottle show, alternate universe, time travel, space battles — and it brought back Denise Crosby for the first of several guest spots. Unfortunately, it also gave her the shiny-eyed tearful expression — “I’m supposed to be dead!” — that made me really doubt her character in both “Encounter at Farpoint” and “Hide and Q”. I’m really not sure why those writing and acting choices were made, but c’est la vie. Anyway, the episode featured the entire crew working together to save the Enterprise-C just so it could be destroyed again, and the self-sacrifice of the Starfleet officers and the way they accepted their fates was really powerful. Also, this led to a derivative (but enjoyable) episode of the Hidden Frontier fan series, “Yesterday’s Excelsior”, which you may enjoy watching. 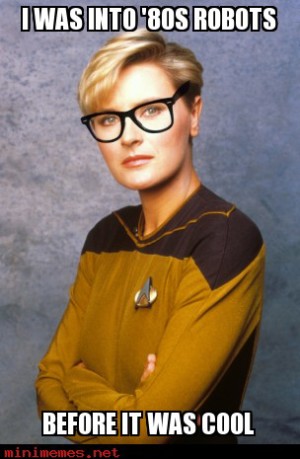 Some time ago, I wrote a column about the Star Trek fan series Hidden Frontier. I haven’t published it yet, but here’s what I said about the show in my introduction:

Star Trek: Hidden Frontier is generally considered to be the grandfather of all Star Trek fanfilms that use green screens in the place of actual sets. From its humble beginnings as a super-short show to its finale as a one-hour mini-movie (or technically the two-hour finale that wrapped up all of the HF spinoffs), the show grew before the eyes of viewers, becoming stronger with each season.

Seriously. You should watch it. It gets really good around season three, and it’s worth crunching through seasons one and two so you get to know the characters. 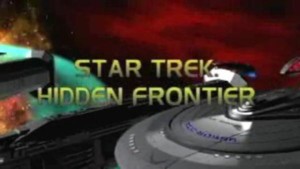