SIX OF THE BEST… Tickets to Ride

My daughter is on her spring break right now, and is spending it with her mother, but before she left we spent an entire weekend playing board games — mostly Ticket to Ride*. So, before I said goodbye for ten days, I asked her what the six best Ticket to Ride variants are. Here’s what she had to say. 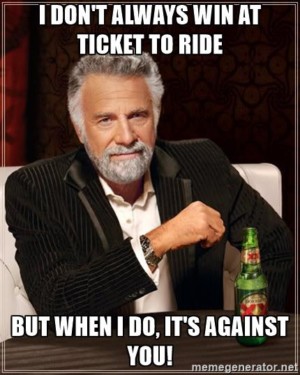 The Europe variant was the first to introduce tunnels and ferries. In addition to connecting your cities via train routes, there are some routes where you have to gamble by drawing three additional cards on every tunnel segment. If your color or a wild comes up, you owe an extra card… or two… or three. It’s a pain — especially this past weekend, when I couldn’t get a dang two-train green tunnel for three turns. The toughest tunnel on the board is an eight-train segment between Stockholm and Petrograd, and because it’s a tunnel you could conceivably need eleven cards to complete it.

Ferries are simply parts of a segment that require a wild to be used. A bit easier, but given that you can only take one wild at a time in most versions, it could be your undoing. There are also train stations that you can place to extend your routes, but that mechanic is overly complex and we just don’t use it when we play. 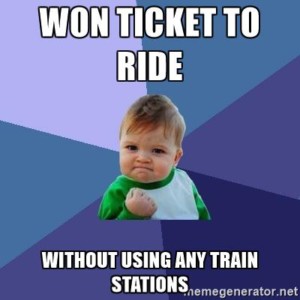 5. Marklin — “Because the pieces are different and the plus-four wilds are amazingly helpful.”

Marklin is the German variant of Ticket to Ride. Your trains span all over the country, as well as heading into Denmark, Switzerland, France, and Austria. The special mechanics for this game are passengers — a complex way to earn extra points by placing colored dots at various locations on the board — and plus-four wilds, which are a special wild that can only be used on — you guessed it — segments of four or more trains. And, as a plus, you can pick up more than one plus-four wild per turn, although the normal wild rules remain.

Marklin has some pretty cool train cards as well — each one is slightly different, and many of them are much more industrial than your standard deck. 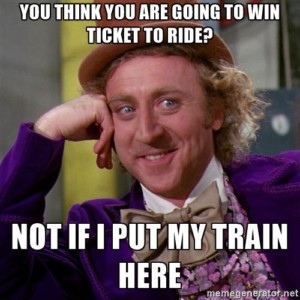 4. Switzerland — “Because even though daddy is the best at it and I usually am the losiest loser it’s a fun game.”

I’m really good at Switzerland. It just covers that one small country, you only get 40 trains (instead of the normal 45) and you can take multiple wilds per turn — because wilds can only be used for tunnels. In addition, you can travel from a city in Switzerland to another country (France, Germany, Italy, or Austria), or from country to country, and depending upon which country or countries you go to you can earn (or lose) more (or fewer) points. And as an extra plus, when you get the Switzerland map, the back of it has India**, which has a cool mandala bonus (for completing a route in two different ways).

Losiest loser, by the way, is our house term for the person who comes in last place. The losiest loser gets to go first in the next game we play. 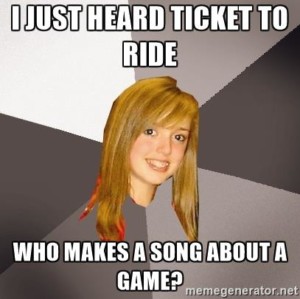 3. Nordic Countries — “Because even though my stepmom is the best at it, it’s really fun to play, and you can only play it with three people.”

We just picked up a copy of Nordic Countries last week when Amazon was having a buy-two-get-one-free sale. It covers Denmark, Sweden, Finland, and Norway, and has some very tricky intersections where, if you don’t claim everything in time, you’re going to get blocked. It also has tunnels and ferries, and the wild rule from Switzerland exists in this version too — which kind of sucks because this game has the longest segment I’ve ever seen (nine trains), and it’s not a tunnel, so you can’t use wilds.

My wife particularly enjoys Nordic Countries because she loves wintertime and Christmas, and every train card has snow on it; also, the tickets are for the “Father Christmas Tour”. 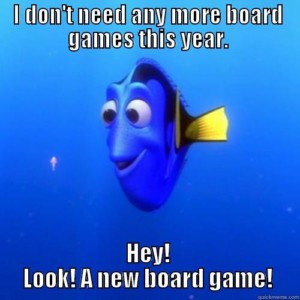 The original Ticket to Ride just covers America (and southern Canada), but after a while it can get boring. So Days of Wonder came out with an expansion called 1910. It has two sets of new routes: some standard ones, like Denver to Santa Fe, and some Big City routes, which I’ll cover in a minute.

The Mega Game is when you take all the cards from the original, 1910, and Big Cities, and have a giant stack of routes. It makes the game a little more fun because there are more places to go. 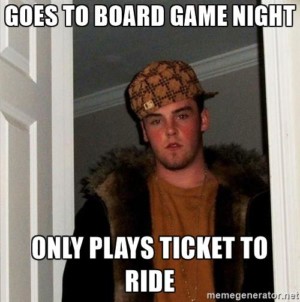 The Big Cities variant is played on the original US board (there’s also a 1912 version for Europe), and it’s a specific set of routes that originate in one of seven big cities: Chicago, Dallas, Houston, Los Angeles, Miami, New York, and Seattle. I’ve gotten over 300 points when playing against the computer (on the app) because since every route starts in one of seven places you’ve got a pretty good chance of touching at least one end-point on every ticket you take.

My wife doesn’t care for playing this one with us, but my daughter and I played on Sunday and she got 180 points — her second-highest score across any Ticket to Ride we’ve ever played. Of course, I got 259, but still, for a kid who’s 10-and-two-thirds years old, that’s pretty good. I appreciate that she doesn’t begrudge me when I win games, and I don’t let her win because she’d know and wouldn’t appreciate not being challenged. 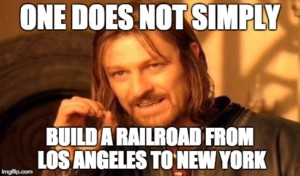 After a long weekend of coming in second, third, or fourth place at most of the games we played, the final one we had time for was Ticket to Ride: Europe. My mother-in-law triggered the endgame while no one was paying attention, and my daughter had completed six tickets (to earn a bonus) along with more than 60 points in train segments, rocketing past me and my wife for first place.

I’d call that a good way to end the weekend. 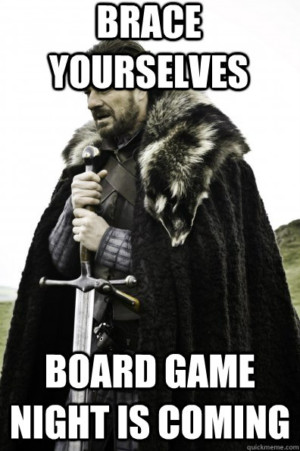 * For those of you who’ve never played, Ticket to Ride is a board game where you collect colored cards to correspond to colored route segments on a map, and then exchange sets of those cards for trains which you put on the route segments. The goal is to complete routes from city to city — say, New York to Atlanta. You have 45 trains (except in some variants, where you only have 40) to complete as many routes as possible.

** Actually, the expansion really is the India expansion and it has Switzerland on the back, but we mostly play Switzerland.