Until this year, I’ve never watched The X-Files.

Oh, sure, I’ve heard of it, and I know what it’s about, and I know generally who the Lone Gunmen and the Cigarette Smoking Man and Mulder and Scully are, but I don’t know how it all fits together. To me, David Duchovny is either the subject of a Bree Sharp song, the star of Californication, or an author of a book about cows. Gillian Anderson stars in The Fall and a lot of people put her on “hottest actress” lists over the years. The Lone Gunmen were spun off onto their own TV show. The X-Files itself was somewhat similar to Fringe.

But one day recently I had a little time on my hands, and I decided to give the show a try.

Holy crap, does it have an awesome pilot episode. In fact, it’s such a good pilot that I’m now going to tell you six of the best things the pilot did right, and how other shows get it wrong. 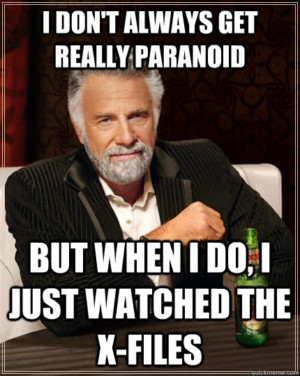 6. The “establishment” character doesn’t immediately discount the “weirdo” character’s beliefs. — From moment one, Scully is aware of Mulder’s reputation, but she doesn’t immediately think he’s crazy for what he believes. She knows he’s intelligent, and he clearly has the chops to be an FBI agent. She also knows he believes in conspiracies and aliens, but in her mind that doesn’t make him a bad agent or a bad person. Scully believes in science, in the empirical and provable, and she wants to do her job the best she can. To do that, she has to go along with Mulder and try to prove via science what he thinks is aliens. She doesn’t believe that what Mulder observes didn’t happen, only that she doesn’t agree with his explanations.

Bad example: In the pilot of Warehouse 13, we have what was supposed to be a Mulder/Scully friendship where Pete is all “this is great” and Myka is “this isn’t a thing”. Pete gets vibes — psychic clues — when something is going to go wrong, and at first Myka completely discounts them. It’s not until Pete proves that his vibes are consistently right that Myka goes along with it. But Scully never automatically assumed that Mulder was wrong; she only said there was most likely an explanation that didn’t involve UFOs. 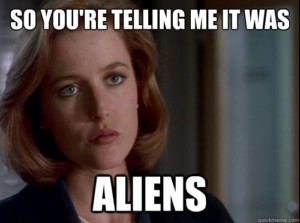 5. The infodumps are multi-purpose. — When Scully first shows up to be interviewed by the three dudes, she’s asked what she knows about Fox Mulder. She replies, and we learn from her not only who Mulder is but what he does and how his work is viewed by the rest of the FBI. But in the same brief period of the show, we also learn that Scully is on the fast track, that she’s intelligent, that she’s well-regarded in the FBI, and that she’s being tasked as sort of a pawn for keeping an eye on Mulder. Even then, though, it’s pretty obvious on the part of the three dudes that it’s not just because Mulder is a screw-up. Maybe that’s because I know generally what’s coming, but maybe not.

Bad example: This is done a hell of a lot in Game of Thrones, mostly because there are so many characters and the exposition has to be shoehorned in however the writers can do it. Just watch the pilot and see how much stuff is said to characters who should clearly already have the information — and, worse, by characters about themselves to other people who already know these things. 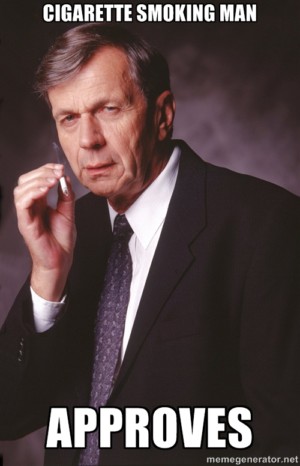 4. The “establishment” character doesn’t “just miss” the weirdness. — Y’know what drives me crazy? The fact that the serious character always shows up just too late to experience the weird stuff going on, and it becomes a game of missed connections. Not so in this show. Scully may not see the lights, but she is smart enough to observe her surroundings and pick up some dirt that doesn’t belong. From that moment, it’s clear to her (and to us, as the viewers) that Mulder may not be making this stuff up.

Bad example: How about literally any show where one lead is supernatural and the other lead isn’t? How about Forever, where Henry just narrowly escapes showing off his immortality countless times? How about Buffy, where there’s always a character who we can’t let see the monsters? How about Psych, where Shawn almost always gets caught out before he extricates himself from some implausible situation in time to keep Lassiter off his ass… iter? It’s not believable that these intelligent characters constantly miss the weirdness going on right in front of them, and in the pilot of The X-Files, Scully doesn’t. (And she continues to be exposed to it as the show progresses.) 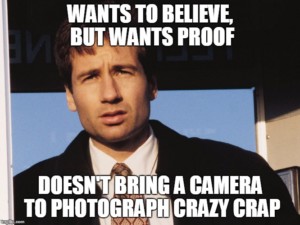 3. The “establishment” character has an open mind. — As I said before, Scully isn’t just there to poo-poo Mulder’s beliefs. That’s what her bosses expect her to do, but she’s not that kind of person. She believes in science and evidence, but if there ever were to be incontrovertible evidence of aliens, she wouldn’t immediately look for another explanation.

Bad example: Pick any episode of Murder, She Wrote. Jessica keeps a very open mind at all times, but the police with whom she works almost never believe her until it’s too late. Either she’s a nuisance, or she’s a woman, or she’s a writer. Now, to be fair, a lot of the police on that show are quite incompetent, but immediately discounting everything an intelligent character says without at least considering it is just dumb. The X-Files would have been a much worse show if Scully had been written as an inflexible straight-woman role instead of what Chris Carter did do. 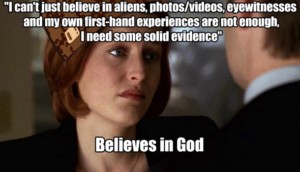 This is one of the things that really annoys me about religious people.

2. The main mystery isn’t bashed over our heads. — The X-Files is a very episodic show, in the “mystery of the week” vein that Fringe picked up. But it also was very clear by the end of the episode that the main mystery is “what’s up with the warehouse at the Pentagon full of alien stuff? How long has the government known about all this?” Clearly Mulder is onto something, and there are people out to stop him from knowing the truth. I mean, it’s right there in the opening credits: the truth is out there. But they don’t hammer the viewers over the head with it.

Bad example: Lost really annoyed me, because there was just too much going on and the whole point of the pilot was “watch this show because it’s a mystery.” There were something like ten main characters introduced in the pilot alone, and TV shows really can’t support that. Even Star Trek: Deep Space Nine held off on introducing its side characters (Garak, Nog, Rom, Keiko, and so on) until the second episode — and that was after a two-hour pilot. If you’re going to have a show that’s all about a mystery, you have to keep things simple for the viewer in other places. The X-Files did this by restricting the number of main characters. 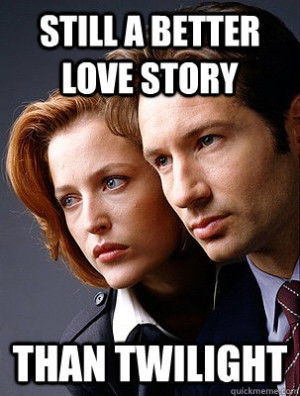 1. There’s no learning curve. — A lot of shows spend too much time introducing you to every character and having them learn how to work together. Not so with The X-Files. Our leads immediately feel competent as a team, in the way that the Miami Metro Police feels competent in the first few seasons of Dexter. You get the idea that Mulder and Scully will, without thinking about it, be able to back each other up and work well together without any of that “getting to know you” crap that so many other shows suffer from.

Bad example: Star Trek: Deep Space Nine gets a little bit of a pass because part of the story is the Federation and the Bajorans learning to work together, but The Next Generation doesn’t. The scenes on the bridge when Q first arrives, and during the escape and saucer separation, feel very forced — especially Worf saying “for me to seek escape while my captain goes into battle…” That was something Picard should have known right off, being that he’s most likely been around Klingons before. And don’t say it’s just because it’s sci-fi — D’Argo on Farscape is basically a Klingon, and we learn much more in the pilot episode from his actions than his words. 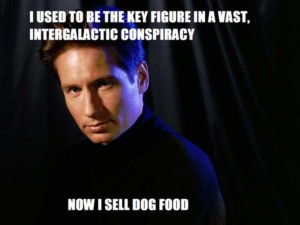 To be fair, this commercial is pretty hilarious.

Bonus Content! Just for kicks, here are six of the best other “perfect” hours of television, in my opinion: 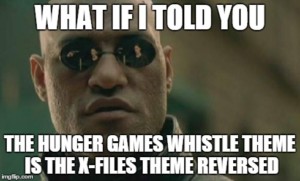