Over time she continued to bug me about the books, and so did some of my other friends and family members, many of whom have both read the books and seen the show.

Finally, toward the end of last April, I decided that I would start reading the books. I mean, I bought the five-pack for $10 off Amazon; why not, right? And, just because I could, I started quasi-liveblogging as I read. It took me a little less than a month to get through the first book, and I’m taking a short break before I get to the next (which I’ll probably start by the end of June).

Still not watching the show, though. 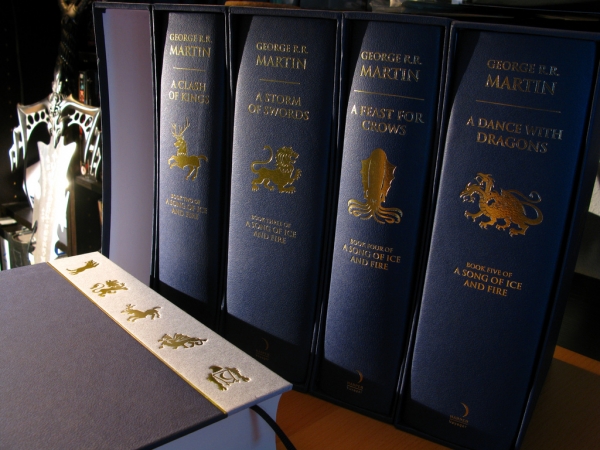 Starting late, though, has its perks. Here are six of the best of them. Warning: spoilers for a book that came out in the 1990s and a TV show that aired three-ish years ago.

6. I can now talk about things that have happened in the books and on the show. — Inasmuch as I’m told by people who know these things, that the first book and the first series of the show correspond pretty closely. So I can say things like “I really thought someone would save Ned at the last moment” and “the death that really surprised me was Khal Drogo” and people know exactly what they can and can’t tell me. Plus, people can be all elitist in that they read the books / watched the show already, which makes them feel good.

5. I can be a book snob to people who only watch the show. — When I originally wrote this bullet-point, I hadn’t yet seen the first episode of the Wil Wheaton Project, but really, Wil said it way better than I could: I’m the “Jim” of my group.

4. I can enjoy people’s reactions as I talk about things I think are going to happen that they know aren’t going to go that way. — My friend Donnie is the person I most talked about A Game of Thrones with, because he’s the person I can most easily access on IM. I told him a zillion times how much I liked Ned Stark, how I thought he was a great character, and it must have been driving Donnie crazy because he knew Ned was going to die. I think my parents were the same way; they watch the show, but don’t read the books. Similarly, I can discuss things (in a limited fashion) with my coworker Raj, who watches the show. Just seeing people’s faces is hilarious because I try to figure out what they’re not telling me.

3. I have five huge books to read, and I can space them out as I like to make them last. — I read fast. I could conceivably read the entire five-book (so far) set in about four months. Maybe a little less, since I have four airplane flights coming up. But I know that the author isn’t a fast writer, and he has a lot of other projects going on (such as his restored movie theater in Santa Fe, which is pretty awesome), so it may take some time before the sixth and seventh books are released. That’s okay with me, though; I have a bunch more book serieses* to read in the meantime. I tried Wheel of Time and didn’t like it, but there are still five more Kushiel books for me to read, plus plenty of classics like the Time Quartet by Madeline L’Engle — not to mention Martin’s other books. I can take my time and really savor A Song of Ice and Fire, and maybe I’ll be ready for Book Six when it’s released.

2. I’m going to be part of the vast group of people who are clamoring for George R.R. Martin to put out another book or two. — Nothing brings people — especially Americans — together like complaining, especially when we’re ignoring social issues or international politics in favor of complaining about a book that hasn’t come out yet. As long as I’ve known about the cultural zeitgeist that is “bitching about how long it’s taking GRRM to write the next ASOIAF book”, I’ve been apart from it. But that’s going to change. Soon I too will be able to take to Twitter and complain that he hasn’t published the book yet. 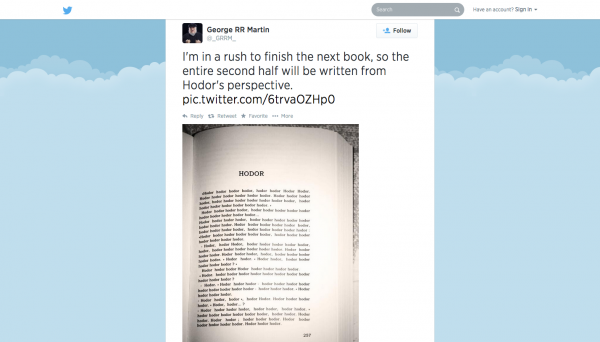 1. I get to read A Game of Thrones and all the other books. — All kidding aside — and there’s a lot of it — I was surprised at just how much I liked A Game of Thrones. I was expecting it to be fairly-average fantasy for the time it was written and published (1996), and I’ll admit that the first chapter didn’t thrill me. But then the second chapter, the one told from Bran Stark’s point of view, pulled me right in. From then on, I was hooked. Sure, you can find things to dislike about the book, but there’s plenty to like as well. I mean, how often is a writer going to have someone push a kid off a parapet? How often is he going to kill main characters in the middle of the book (instead of the end)? And when it comes to piling stuff on, the only good comparison I have is Stephen King when he does it to Jake in 11/22/63. But unlike Jake, Ned Stark doesn’t make it. If the first book was this good, I can only imagine the wild ride I’m in for. And I can’t wait.

Fair warning: you basically need to stay off the internet if you’re going to read these books. There are gifs everywhere, and they’re unintentionally spoiler-y. Articles abound about* who signed on for more episodes, who’s dead, who’s not, what the secrets are, etc. Not to mention the loud-ass programmers who sit near me at work and love to talk about the same things I do, including Game of Thrones.

** Like the alliteration there? Which, by the way, is technically a form of assonance, which is something that, along with consonance, I love to do in my writing.