SIX OF THE BEST… things The Orville did better than Star Trek: Discovery

I am, as you know by now, an enormous Star Trek fan. When I heard that Bryan Fuller was attached to a new Trek series, I had hopes.

And then the studios ground up and spit out his ideas. And then CBS decided they would doom their new Star Trek show by forcing U.S. viewers to pay $6/month for their proprietary streaming service (while the rest of the world gets it on Netflix, which they’re already paying for). And then Fox premiered The Orville two weeks ahead of the premiere of Star Trek: Discovery.

A lot of internet critics panned The Orville as being a bad parody, or a bad spoof, or a bad show, or any number of other bad things. But part of the problem is that Fox spun it as being “Family Guy in space”… and it’s not.

See, Seth MacFarlane is about my age, and as such, he probably grew up watching TNG, the same as I did. So his exposure to Star Trek was bright colors, open spaces, and peaceful missions. Plus, the USS Orville is basically just another ship in the fleet — kind of like Voyager would have been if it hadn’t been flung 75,000 light-years across the galaxy. For every Enterprise, there’s a Voyager or an Orville who has to delivery cargo, move people around, hold the line, and so on. Not every ship can be the best ship in the fleet. Someone has to be the 30th-best.

With that in mind, here are six of the best things The Orville did better than Star Trek: Discovery (at least, in the early parts of each show’s first season). There will be spoilers for the first few episodes of both The Orville and Discovery. 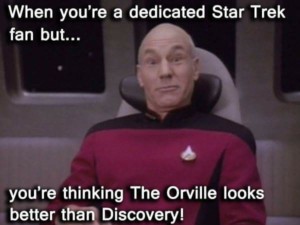 6. The Orville got there first. — Fox premiered The Orville on September 10, two full weeks before Discovery. And it didn’t have an enormous media blitz; just some spots on Fox, as much as any other new show might get. So far its ratings have been pretty decent. And it airs on regular television. CBS, meanwhile, has put Discovery on a paywalled app that most people don’t even have (in the US); it’s not on Hulu or Netflix. That’s another thing we have to pay for if we want to watch Discovery. Why is CBS trying to kill this show?

On the other hand… Fox is known for putting its sci-fi shows on a very short leash. Regardless of The Orville‘s success, MacFarlane is undoubtedly looking over his shoulder, waiting for the network to give them the axe. Discovery, though, is supposed to be CBS’s flagship All Access (their app) show, and it’ll definitely get at least one full season. Plus, it’s Star Trek; it has a longer rope than most franchises. 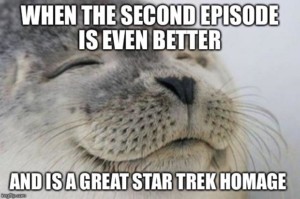 5. There’s no canon to screw up. — The Orville takes place in a completely new universe. There’s no pre-existing canon to screw up, and no 50 years of shows to respect. There’s no opinion from the fans or viewers about how the show is treating canon. But Discovery takes place ten years before The Original Series, and it’s supposedly in the prime (Roddenberry) universe, not the Abramsverse. It already looks too futuristic compared to TOS or even TNG. And nobody wanted a prequel; remember how much viewers didn’t like Enterprise?

On the other hand… Because most people have a cultural consciousness of the world of Star Trek, Discovery can shortcut a lot of things that The Orville can’t. They don’t have to explain transporters, Vulcans, Klingons, warp speed, phasers, Starfleet, or the Federation because even people who don’t watch Star Trek know what some of those things are. The Orville is completely new, and while some shortcuts are taken (such as the quantum drive), it’s more difficult to just take some things on faith and extra exposition is necessary. 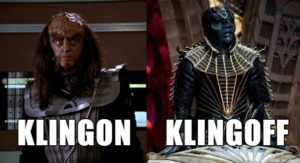 4. It’s not afraid to be funny. — Seth MacFarlane’s sense of humor isn’t for everyone. Sometimes even I think he goes too far or just isn’t funny. The gelatinous being trying to get with Dr. Finn? The dance-off at the OK Corral? Those jokes didn’t hit for me. But at least it’s trying to be funny. Discovery had a few small-smile moments, but that pilot was SUPER SERIOUS and super-dark as well, and it just got more so from there. I don’t see where there will be room for any humor in Discovery, or even lightheartedness. Even in its darkest hour, Deep Space Nine (previously the “darkest” of all Trek shows) had small moments of levity.

On the other hand… The biggest knock against The Orville is that there’s intentional humor at all. Star Trek makes a funny episode every now and then, but any other humor is supposed to be situational or relevant. That’s not Seth MacFarlane’s style. Sure, he can do it, but he likes his characters to do funny things… and his sense of humor is, as I said above, not for everyone. I really wish there was a TV-PG version of The Orville, because I think a lot of Star Trek fans would show it to their kids if they didn’t have to be afraid of a dick joke popping up* here and there. 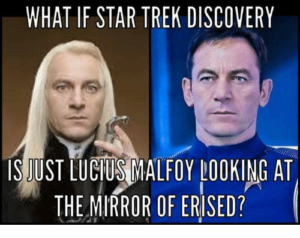 3. The established relationships make sense. — The main established relationships on The Orville are Ed/Kelly/Gordon, and to a lesser extent Bortus and Klyden (as they have been together for I believe more than three years). Ed and Kelly are ex-spouses, and Gordon is Ed’s best friend who also, ex officio, knows Kelly and probably liked her before she had her affair. On Discovery, while the relationship between Sarek and Michael was adequately explained, if we’re in the prime universe, then where’s Spock? Where was Michael when Spock was younger? I’m pretty sure this takes place during the period when Sarek and Spock weren’t speaking, but if Michael is going to be a Spock-surrogate for Sarek, then we need to see more internal conflict in Sarek himself. And don’t say he’s a Vulcan and doesn’t show emotion; good actors (Nimoy, Lenard, Russ) have all showed Vulcan conflict in the tiniest movements of their expressions. I’m sure James Frain has the ability to do this, but he really needs to be told to do so.

On the other hand… The Orville is trying to make Malloy and Lamarr (the helmsman and navigator) into a sort of friend duo (and Greek chorus) that just isn’t working out yet. They’re too similar when it comes to character types. Meanwhile, Michael’s relationship with Captain Georgiou was natural and well-defined. So was her constructive adversity with Saru (at least, until the end of the first episode). Nothing felt forced there. 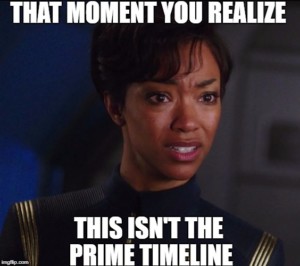 My biggest beef with the show is that they SAY it’s the prime timeline but it’s really not.

2. It’s made from a place of love. — The Orville is clearly Seth MacFarlane’s love letter to space adventure in general and The Next Generation in particular. It’s a crew going on missions, working together, having interpersonal interactions, and living their lives. It’s fanfiction, basically, and it’s exactly what fans wanted. I thought Discovery would be as well, what with Bryan Fuller running it, but have you watched the credits? Fuller is still an executive producer, and the showrunners (Gretchen J. Berg and Aaron Harberts) have Fuller’s blessing. But did you see how many EPs there are? Eugene Roddenberry, Trevor Roth, Lisa Randolph, Ted Sullivan, Heather Kadin, Alex Kurtzman, Akiva Goldsman, and David Semel — and that’s just the pilot. That’s a lot of cooks in one kitchen, and that’s not about love; that’s about business.

On the other hand… Bryan Fuller says he loves Star Trek, and I believe him. He treats the material thoughtfully and with respect. He’s also well-liked in the genre community, as he’s created lots of great shows like Dead Like Me, Hannibal, and American Gods. I wish he’d stayed on as showrunner; I think we’d have a very different Discovery if he had. 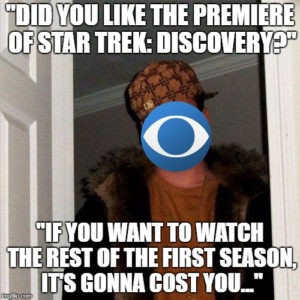 1. Discovery is just trying too hard. — Discovery wants so badly to be Star Trek that it’s out-trekking itself. The Klingons are more grandiose and heavily (and weirdly) armored (and all completely bald), and they sound like Bane on a bad day. The ship is super-duper technological, with giant windows and screens that pop up everywhere, and even holo-communications, which were invented in the days of Deep Space Nine. So why does the Shenzhou have them? Or the Klingons? And the sound effects on Discovery are a mix of TOS and TNG, and it’s more distracting than anything. Even the end of the transporter effect, where the beam-ee turns into a poof of dots, is too much. The Orville, meanwhile, wants to be a Star Trek show but either doesn’t draw attention to that or hangs lampshades on everything. It’s not perfect in that regard, but the only way it tries too hard is in the humor.

On the other hand… Given the pace of technology right now, it wouldn’t surprise me if all the stuff we see on Discovery that they didn’t have on TOS actually exists by the time we get to the 23rd century (as long as the Cheeto doesn’t tweet something out that starts global thermonuclear war). Enterprise was similar in that regard. The Orville is also reasonably forward-looking, but it doesn’t have to worry about respecting canon of a show made in the 60s. 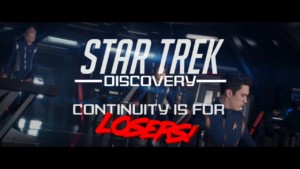 I really like Sonequa Martin-Green as Michael Burnham. I think she plays the character very well, with the right mix of Vulcan logic and human emotion. She’s almost a literal reverse-Spock in terms of human vs Vulcan. Her face acting is pretty good too. I am very pleased with her casting.

My wife made an interesting point during the pilot. The Shenzhou was commanded by an Asian woman, with a black first officer, at least one character that looked Middle-Eastern, another woman, and a non-white doctor and communications officer. But the captain of the Discovery is yet another white dude in command of a lot of diverse people. I don’t have anything against Jason Isaacs, who is a perfectly fine actor, but I really think we could have gone in a different direction there.

Also — two of the three first “known” characters that were killed were POC: Georgiou and Commander Landry. There was also that white dude from security. But I’m just saying, maybe don’t fridge the POCs? Especially if you’re just doing it to advance another character? (At least the other character is also a POC.)