SIX OF THE BEST… things about One-Punch Man

Recently Netflix recommended to me a show called One-Punch Man. Here is the description:

The most powerful superhero in the world can kill anyone with one blow. But nothing can challenge him, so he struggles with ennui and depression.

Now that sounds right up my alley. So I watched it, and I enjoyed it, and now I’m going to tell you six of the best things about it. Spoilers will occur. 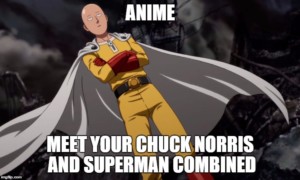 6. Saitama’s origin story is kind of ridiculous. — One day, a monster attacked Saitama’s (the main character) town. He defeated a crab-like monster three years prior to the start of the show, and that made him want to be a superhero. So he trained very hard, just doing calisthenics and eating right, and he became the most powerful hero in the universe, able to kill anything with one punch. It’s silly, and it lampshades origin stories in general, and I love it.

I’d like to know more about… More than once on the show there are allusions made to some sort of prophecy about Saitama. But regardless of that, you can’t become the world’s strongest hero by just doing calisthenics and eating right. I have a friend who lost over 100 pounds just by doing that, and she’s been at it for more than three years, and while she is a physically-strong woman in good shape, she’s not powerful enough to kill anything with a single punch. There has to be more to it than that. 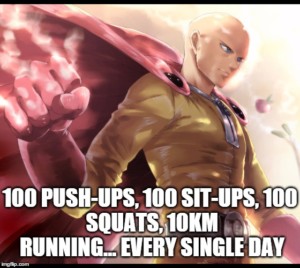 5. The heroes are also ridiculous. — One of the most popular heroes in Saitama’s world is Mumen Rider, a guy who rides his bike while helping others. There are samurai, martial artists (Silverfang is one of my favorite characters), cyborgs, and even a guy who uses a metal bat. Compared to universes like DC and Marvel, who have some pretty silly heroes themselves, One-Punch Man blows them out of the water.

I’d like to know more about… …Metal Knight. Toward the end, Genos (Saitama’s pupil and friend) is warned that Metal Knight (IIRC) is not his friend. Genos’s backstory is that his family was killed by a rampaging cyborg; was Metal Knight that cyborg? I don’t know, and I want to. 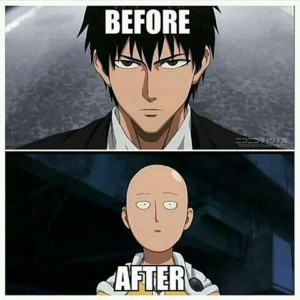 4. It makes fun of lots of tropes. — One of the funniest parts of the show is the S-Class (which is the highest, most powerful class) Puri Puri Prisoner. His backstory is not funny at all, but if you can get past that, the fact that he basically pulls a Sailor Moon transition to become a super-powerful fighter with wings — who fights naked, by the way — is a hilarious send-up of the “transforms from normal person into hero with a very long animated sequence” genre. Also, most of the heroes are a send-up of something or another in anime and superhero fiction. And there are plenty of send-ups of “special moves”, with all of their accompanying lead-up… although it even makes fun of that with Saitama’s series of special moves:

Compared to some of the other attacks, these are intentionally silly — but also super effective.

I’d like to know more about… Terrible Tornado is your typical capricious young girl superhero with mental powers. I’m still trying to figure out why the Hero Association puts up with her; is it just because she’s so powerful? Because she’s kind of a bitch. 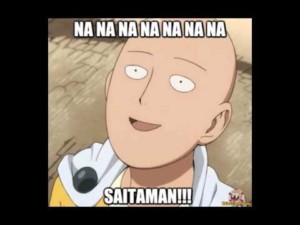 3. The story is about people, not about fighting. — While the show contains many fights between heroes and villains, it never really strays into “giant overarching plot” territory. Every episode is more or less about Saitama and Genos, or one of the minor characters like Sonic and Mumen Rider. The plot always comes back to how what’s happening affects Saitama, and his life is often so mundane that it’s just plain absurd — like when a supervillain interrupts his trip to the grocery store on the day they’re having a big sale.

I’d like to know more about… According to Wikipedia, One-Punch Man takes place on an Earth-like super-continent planet. Okay, fine, I buy that, but I want to know more about the world. What are the different parts of it like? Everything we see is pretty much the same climate and cityscape.

2. It’s internally consistent. — A big problem for me with episodic television is how things often reset themselves. Sure, there are minor plots threaded through a few episodes here and there, and yes, TV is getting better about this, but when I was growing up everything reset at the end of the episode, even when it shouldn’t have — looking at you, Star Trek: Voyager.

I’d like to know more about… There’s a moment in the show that I think I missed where Saitama says his suit is an heirloom or something, but given Saitama’s power level and the fights he gets into the suit should show some wear-and-tear. Or does Saitama have his own Edna Mode somewhere? I feel like he’s more the kind of guy who knows how to fix his own clothes, but the suit still looks pretty good even by the end of the show.

1. Saitama goes out of his way not to fight. — Did Saitama read The Art of War? Because a lot of the time he prefers to dodge and talk his way out of fights. He only attacks when he has to, and he doesn’t allow his enemies to bait him. He’s fully aware of the fact that he has the power to kill anything, and he doesn’t hurt people, only monsters — as evidenced by how he actually seemed to feel bad when he hit Sonic (even though he pulled the punch).

I’d like to know more about… How does Saitama afford to keep even his small apartment once he becomes a hero? According to this page, he used to work part-time at a convenience store; before that, he was a salaryman. Maybe he saved his money and is dipping into that? Maybe the Hero Association pays him? It’s these little details that bug me. 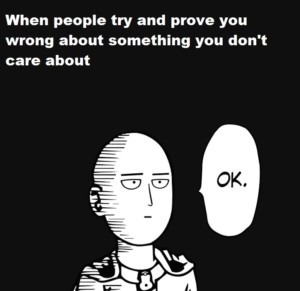 I’m totally going to be Saitama for Halloween… except that I’m not shaving my beard off again. My Charlie Brown costume was just too weird. 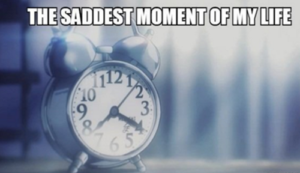 This is the image behind the show’s end credits.