A few years ago now, I stumbled upon a website where this guy was watching Buffy the Vampire Slayer for the first time, just like I’d finished doing recently (at the time). I was flabbergasted — a, that someone was doing this, and b, that there was a massive community who made it a point to read and watch this guy watching a TV show.

The guy in question is named Mark Oshiro, also known as Mark, who reads and watches stuff, and he is a very interesting person. Here’s six of the best things about being Mark.

1. He’s been doing this for five years. Because of his upbringing, which he’s discussed several times on his site, Mark was not exposed to very much popular media beyond The X-Files and The Twilight Zone. As a result, in 2009 one of his editors said it would be interesting to see Mark read Twilight and write about the experience. But when people found the reviews online, Mark’s editor told him he had to keep going, to keep driving traffic. After Twilight came Harry Potter, and later, MarkReads.net and MarkWatches.net. Since 2012, that’s been Mark’s full-time job.

In his words: what did Mark think of Twilight?

I’ve read a few things I didn’t like a whole lot over the years, and some things that were downright terrible, but it’s interesting to me that I’ve never been asked to read something that even remotely compares in terms of how awful the Twilight series was for me.

2. Each new project brings in a fresh influx of Mark fans. Though some people do leave after Mark finishes a project, that’s happening less and less as people become members of the community — and it’s a community where everyone is safe to talk about anything related to the shows or books Mark is watching or reading. It’s also a spoiler-free community; all text related to current or future projects is ciphered using ROT13. And spoilers are absolutely forbidden in the Mark-verse — he’s said he won’t read other sites like his because he doesn’t want to be spoiled.

In his words: what does Mark call his job?

I’m a one-man book club! Except I’m (usually) the only person who hasn’t read the book. (One-man TV club sounds weirder, but the sentiment is the same. People watch me discover a fictional world for the first time.)

Right now, I’m watching “Mark Watches Star Trek“, and even though I’ve seen every episode at least twice, it’s still amazing to not only watch Mark’s reactions but also his little dances as he listens to the opening theme of the show.

3. He gets to be on panels talking about the things he loves. Because Mark is not a cis-het white male, he is often asked to speak on panels about race or queerness, both of which often feature in his reviews. He’s been invited to several conventions to speak as well. And when he’s not at cons, or at home churning out one of the 15-plus articles he publishes each week (each one 1000 words or more), he’s on the road doing speaking engagements or lectures. The former, by the way, are spent chatting with fans and reading terrible fanfiction aloud — when he came to Atlanta in 2013, he read, among other things, “Hermione and the Pizza Boy”, which is notable for not having a pizza boy anywhere in it.

In his words: how can Mark make a living doing this?

Commissions: you pay Mark a set amount (sold through his webstore) for him to do a video of a certain book chapter or TV episode. These days there are enough fans that almost everything gets a video. Some content is made available for free on YouTube; some you have to buy. 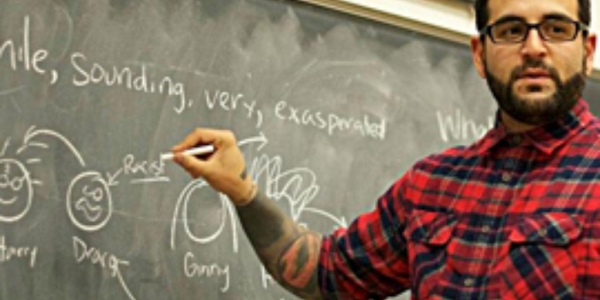 4. He gets to meet people who love the things he loves. But more than that, Mark’s touring and speaking engagements are about turning the tables. When Mark reads or watches something new, his reactions are fresh and raw, whether it’s Roger Korby turning out to be an android or Granny Weatherwax and the Archchancellor having a magical duel. When he does speaking engagements, he’s able to reverse the dynamic.

In his words: how does Mark pick what to read at live events?

I go with things that are funny due to absurdity and the shock factor. I don’t necessarily want to gross people out — at least, not at the start of the event. But I try to choose things I know I can ham up, that don’t require an intense familiarity with a specific canon. […] I like making people laugh and yell.

5. He spends an hour and a half — or more — on each article. Think about that for a second: three articles a day (sometimes more), 90 minutes per article (sometimes more), just writing about TV and books! It’s the kind of life many nerds dream about, and he gets to live it.

He did tell me that sometimes it takes as little as an hour.

In his words: what’s the process of writing a review?

I usually jot down a few notes immediately after I’m done watching/reading; then I’ll write out a rough draft that largely resembles the outline-heavy reviews that I have for double features. Then I rewrite it all into a longer piece with proper paragraphs.

A double feature is when Mark adds a second (or third) TV episode each day for a set period, usually for a short-run series.

6. He spends three days a week “working”. Outside of visiting the gym or spending time with his boyfriend, Mark spends Monday, Tuesday, and Wednesday of each week closed off to the outside world. His circle of friends knows that those are his writing days, and they’ve learned not to bother him.

In his words: what types of jobs have influenced Mark Does Stuff?

I’ve been a community manager since I was 19, though that’s not what we called it over a decade ago. I’ve helped run online communities from a few hundred members to tens of millions. It’s what I know very well, and it greatly influenced how Mark Does Stuff was set up and how it’s currently run.

Here’s a bonus for you: next week, six more things about the guy who’s basically living the dream, watching TV and reading books and writing about them on his website — something all nerds can get on board with.