SIX OF THE BEST… things about Hamilton

Oh, come on, you knew it would be written eventually. The damn show has taken the theater world by storm, and it won like a zillion awards*. You’re probably sick of hearing about it by now. Either that, or you listen to it on repeat.

Anyway, here are six of the best things about Hamilton: an American Musical. 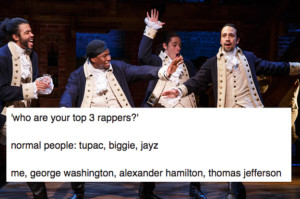 6. It expands beyond “that guy shot by Aaron Burr”. — What do most people know about Alexander Hamilton? Before I heard the show (I haven’t seen it yet), I knew that he was a founding father of the US, that he wrote most of the Federalist Papers, that he was the secretary of the treasury, and that he was killed in a duel with Aaron Burr. I didn’t know where he came from, what his history was, or how he came to be important to the birth of the US. I didn’t know he was an orphan, or that he came from a Caribbean island, or that he was married and had children. History books leave out a lot of details.

Alexander Hamilton
We are waiting in the wings for you 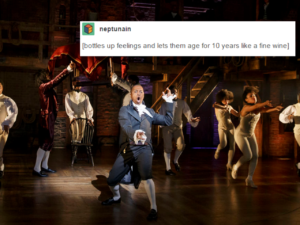 5. It teaches a lot of American History. — In addition to the events of Hamilton’s life, there are also several musical numbers about battles fought and elections contested where Hamilton wasn’t directly involved. The show does mention his capturing of several British cannons, but only in passing; on the other hand, it spends a lot of time telling us about other important people in the American Revolution, such as Lafayette, Laurens, and Hercules Mulligan. It’s basically a walk through that entire period of history, from 1776 through Hamilton’s death in 1804. 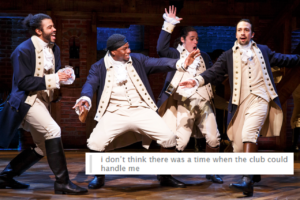 4. It shows the other side. — While I know that dramatic license can be taken at any time, what was interesting to me was how the musical also showed us the life of Aaron Burr — his history, his views, and ultimately what led to the duel between Hamilton and himself. This definitely added to the emotional impact of the show in how these two men interacted with each other — the way their friendship and respect eventually melted down into disdain and finally strong dislike. No fight exists in a vacuum; there’s always a reason for it. Seeing this reason made the story that much more captivating.

A tailor spyin’ on the British government!
I take their measurements, information and then I smuggle it
To my brother’s revolutionary covenant
I’m runnin’ with the Sons of Liberty and I am lovin’ it!
See, that’s what happens when you up against the ruffians
We in the shit now, somebody gotta shovel it!
Hercules Mulligan, I need no introduction
When you knock me down I get the fuck back up again! 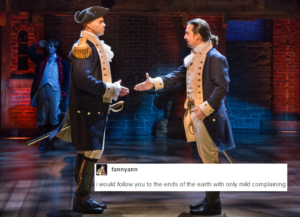 3. It doesn’t matter that you know how it ends. — Anyone who’s studied American history (or seen a certain milk commercial) knows that Aaron Burr shot and killed Alexander Hamilton in a duel. If you’re going to see Hamilton, you know that the climactic event has to be Hamilton’s death. But what makes it great is that there are about two-and-a-half hours of material before that point, and casual students of history will be interested in finding out what led up to the duel. I certainly was. 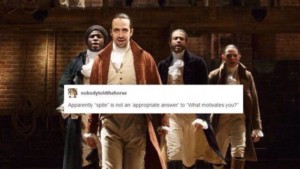 2. The music is great. — Whether you like or dislike rap and hip-hop, there’s no denying that the composition and lyrics of Hamilton are intelligent, catchy, and well-performed. In fact, I think one of the weakest performances in terms of singing is by Lin-Manuel Miranda himself (the author of the show), and he’s pretty darn good. Add in all the other excellent singers and performers, and you’ll be humming these tunes for days. Which I think is a great testament to how well the show is put together. 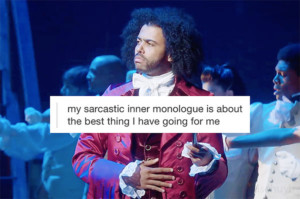 1. There’s only one white actor. — Jonathan Groff plays the King of England, and he’s the only white guy in the entire show. Everyone else is non-white, and that’s not a “normal” thing to see in a musical (and I’ve seen a fair number of them). Miranda has said the reason he’s written and cast the show this way is to reflect America as it is now, and I’m fine with that. From moment one, even just listening to the show, I’m completely on board with these characterizations. With all the furor over the whitewashing of characters in Iron Fist, Ghost in the Shell, and Dr. Strange, it’s kind of nice to see it go in the other direction and allow actors who maybe aren’t often considered for these kinds of roles a shot at showing just what they can do. 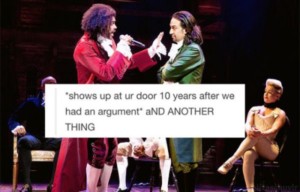 And now, what I think are the six best songs in Hamilton:

I also really love “It’s Quiet Uptown” for its sadness and melancholy, but I just couldn’t rank it high enough to make the list. Alas. 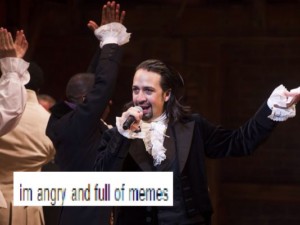 * It was a bad year to put out a musical unless your name was Lin-Manuel Miranda. My cousin is the lyricist of the School of Rock musical and, as good as it may or may not have been, it got creamed. At least he got to have some fun with Galavant.