Still, we all try to improve our health in one way or another, usually by giving things up. Here are six of the best things I’ve given up in an effort to improve mine.

Caveat: this is all my uninformed opinion. I am not a doctor, dietitian, trainer, or expert of any kind. 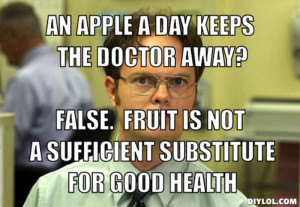 6. Money — Health is expensive. Healthier foods cost more than unhealthy ones. I spend more than half my grocery budget every week on fruits and vegetables, and I try to go to restaurants with options that are, if not “healthy”, at least “not so full of grease that I’m going to have a heart attack just stepping in the door”. And if you want to go to one of the “healthy” grocery stores, you’re going to spend a lot more money than if you just go to the shop on the corner.

One weird tip… Believe it or not, you don’t have to go to Whole Foods or Trader Joe’s to get healthy products. Regular grocery stores like Safeway, Kroger, Ingles, and Publix all have healthier selections — even if you don’t buy 100 percent organic and natural. Last weekend I went into Aldi to pick up a couple of things that only they sell, and ended up getting half my list there. Don’t fall into the trap of “expensive = healthy”. Sometimes it does, but not always. 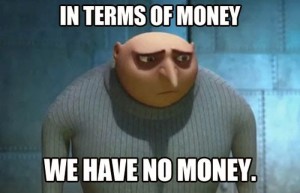 5. More Money — If you have the discipline to exercise without going somewhere to do it, more power to you. But I don’t, and except for one year of my life when I walked every night for 40-60 minutes, I never have. If I don’t go somewhere specifically to exercise, I won’t. The thing is, gyms aren’t cheap. Some are overpriced, sure, but they all have to pay rent on facilities, equipment costs, power and water, and staff. Still, if you can’t do it yourself, sometimes the best option is to shell out for a gym membership.

One weird tip… My apartment complex just reopened their gym, and I do plan to use it (as soon as I go by the office and pick up a key), but that’s in addition to the gym membership I bought already. If you’re going to buy one, find one that’s convenient to your house, easy to get to on the way to and from work, and cost-effective. My fiancee and I found a gym that is all three of those things, and we ended up paying about $9.66 per month for it by buying a year’s membership in advance. A lot of people have difficulty ending their month-to-month gym memberships, so paying in advance is a way not only to avoid that, but also to use the sunk cost fallacy to your advantage: you’ve already paid for it, so it would be silly not to go, right? Some days that’s the only thing that gets me in the door… but once I’m there, I go through the whole workout. 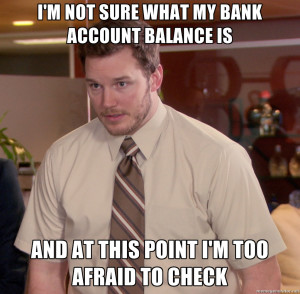 4. Caffeine — I work in an office environment, and have done for the past ten years. Coffee is pretty much the lifeblood of most of my co-workers (except for one guy who prefers soda), and to that end we have three different coffee makers in our break room: the one provided by the company, a K-cup machine, and a traditional brew-into-the-pot machine. My co-workers depend on coffee (and tea) to wake up, stay awake, get extra energy, and have an excuse to get up from their desks. They’re addicted, and after a while it goes from “enjoying a cup of coffee” to “chasing the high”. It also probably keeps them regular.

One weird tip… My body has a strange physiological reaction to most substances: it gets addicted, and fast, and I get the worst withdrawal headaches. Seven years ago I had surgery and was given painkillers. One day I woke up and had no pain, so I didn’t take the painkiller. Two hours later I had a migraine almost worse than the pain that caused the surgery in the first place. I was physiologically addicted, even though I didn’t have the mental triggers that made me “want” the drug. Same thing happens with caffeine. So about three years ago I gave it up for good. Not even decaf. I miss coffee, but I understand that, in my case, not having it is the better option. It sucked to give it up, but now I have replaced it with water. I still get up from my desk all the time, by the way, and socialize in the break room. You can too. 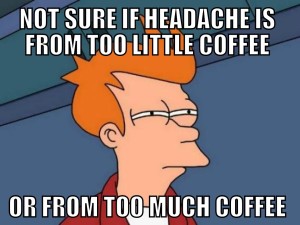 3. (Most) Sodas and Juices — By now you must’ve seen one of those articles showing how much sugar is in a can of soda. And, look, I get it, soda often tastes pretty good and can give you a jolt of caffeine. Fruit juices give you a jolt of sugar without the carbonation, though you need to look really carefully at the label to determine if you’re getting mostly juice, mostly artificial flavoring, or mostly water. It’s amazing how many non-apple juices have apple juice in them.

One weird tip… The two non-water drinks I drink most regularly are ginger ale and Gatorade. Ginger ale is for my stomach, although you need to be careful because many companies have changed over to using sucralose (Splenda) to lower the calorie count. Unfortunately, sucralose makes everything taste terrible. At the time of this writing, the only mass-market ginger ale I’ve found that doesn’t use sucralose is Canada Dry. As for Gatorade… well, believe it or not, I actually use it as a sleep aid. If I drink about a pint of it an hour before I want to fall asleep, the sugar crash will knock me right out. I suppose this would probably work with Powerade as well, but I think Powerade tastes too much like salt so I don’t bother with it. 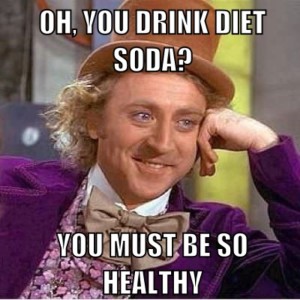 2. Comfort — Look, we all like to be comfortable. We find the most comfortable chair at work; we buy comfortable sofas and beds for our house; and, if something is going to be painful or unpleasant, we find ways around that. After the flood that ruined most of our living room, my fiancee and I sat on literally dozens of couches until we found one we liked, not only for comfort but also for size and appearance. When I moved, I bought a firm bed because… well, honestly, because it was the least expensive option, but I find it quite comfortable.

One weird tip… For most people, though, comfort doesn’t necessarily equal health because being comfortable means not moving around, and not moving around means you’re not exercising, and not exercising often leads to “worse” health. But I don’t think you should sacrifice your couch for a straight-backed chair; I’m just saying, don’t get too comfortable all the time. Exchange some of your comfortable time for time walking around, or going to the gym, or playing in a sportsball league. When you get home, you’ll appreciate the couch that much more. 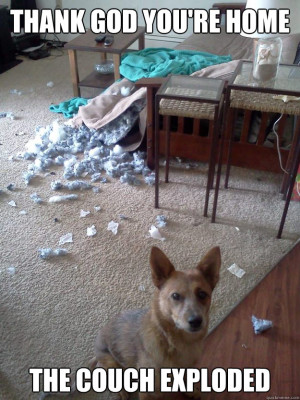 1. Time — Being healthy takes time. Exercising takes time; cooking healthy food takes time; finding better options takes time. It’s about a thousand times easier to stop at McDonalds on the way to work and get a coffee, hash brown, and biscuit, especially when you don’t have to brew the coffee, cook the potatoes, bake the biscuits, fry the bacon, and crack the eggs. Making that kind of breakfast can take more than half an hour, and who wants to do that every day*. Lunch out with co-workers, or make your lunch in the morning? Dinner delivery, or dinner made in your own kitchen? I would submit that convenience is one of the biggest causes of unhealthy people, because it encourages unhealthy behavior.

One weird tip… If you set aside time on Sunday to prepare all your meals for the week, or at least sous-chef them, you’ll be more likely to eat more healthily. Spending two to three hours on one day beats the hell out of doing it every day. Usually on Sundays I’ll prepare all the vegetables for salads and taco night, and I’ll make a dip or hummus for my snacks at work. Sometimes I’ll throw food in the crock-pot and portion it out for the week, because I personally don’t mind having the same thing every day. I do admit that I get breakfast at the work cafeteria sometimes, but I watch them cook it — eggs, vegetables, a little oil to keep the pan slick. If you have a cafeteria where you work, as long as you know what’s going into the food (or there’s an ingredient list), you can save a little time. But most days I just have cereal. 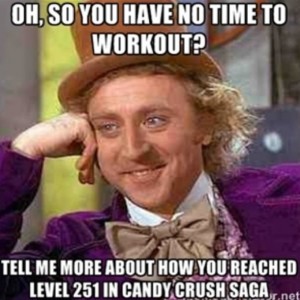 What bothers me most about so many health articles is that they always tell you what to cut out of your diet. But 25 years of on-and-off dieting has taught me one thing: unless you have a medical reason not to consume something (like allergies, or my issues with caffeine), telling yourself you’re not going to have it anymore is a recipe for failure. Have dessert, but not too much; skip the gym, but only if you’re going to go three times that week; stop for McDonalds, but skip the soda and fries. And sometimes you just need to split a pizza with someone, or get a large popcorn (and a refill) at the movie theater.

It’s okay. I promise. You’re not a failure for doing any of these things. You’re only human.

You only fail if you stop trying, and as long as you’re trying, you’re doing more than you would do otherwise. So, ultimately, the best thing to give up to improve your health… is failure. 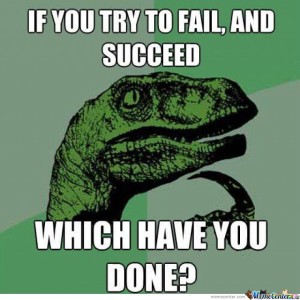 * Other than Wilson Fisk, who apparently makes himself an omelet every morning.