Home/Gaming Addicts Anonymous, Six of the Best/Worst/SIX OF THE BEST… things about classic video game systems
­

Every year for the holidays, I get myself a little something that I find on sale. Sometimes it’s off my Amazon wishlist; sometimes I come across it on a daily deals site; sometimes it’s in a store.

This year, it was via Groupon: the Retron NES game system.

Now, that’s not the only old game system I own. I also have an Atari 2600, an Atari 7800 (that kind of works), a Sega Genesis, and a PS1 that just gave up the ghost. I’m discounting the PS1 for now because, despite being almost old enough to drink, doesn’t really count as a “classic” system. No, I’m talking about the classic, cartridge-based game systems, and six of the best things about them. 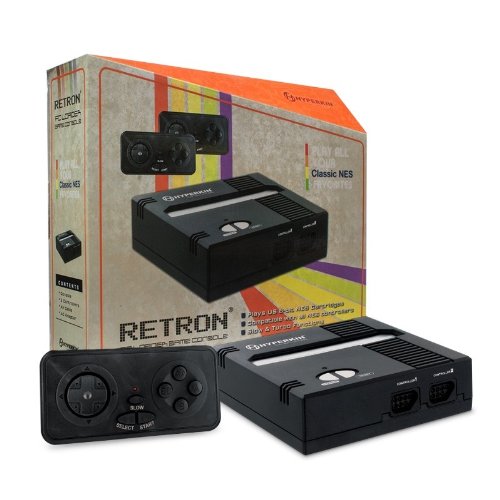 6. Plug and play — You can literally set one of these up in minutes, stick in a cartridge, and start playing. The only thing that kept me from playing my Retron was that my TV was too advanced — it doesn’t have an RCA input for non-component video, so I had to get an adaptor off Amazon. That came in a couple of days, and I was good to go. Plugged it in, popped in a cartridge, and I was a kid again.

5. Variety — There are a lot of NES games. Admittedly, some of them are pretty awful, but there’s a lot of gems in there. And most of them are replayable and fun regardless — no matter how many times I beat Gyruss, I still enjoy playing it to see if I can beat my best time. And Super Mario Bros 2 and 3 are like old friends. It was nice when I had a Wii because I could save my game and come back to it, but I still play the cartridge versions as well.

4. Cost — A new PS4 or XBox One game costs $50-$70, and most of them come with the “option” to buy DLC. These days a classic NES or Genesis game can cost as little as a dollar if you get them in a lot off eBay. I’ve been paying about three bucks apiece once the auctions end and shipping gets added in. As long as you make sure the listing says “tested”, you’re in good shape. Also, Retron has a few mall kiosks (I saw one in the Sawgrass Mills Mall in Sunrise, FL) where you can buy working, tested games for $10-$30 depending upon how rare they are.

3. Ease of use, part 1 — The most next-gen console I’ve used regularly is a Wii, which is eight years old. To play that you have to turn it on, pair the controllers via Bluetooth (when you change the batteries, they usually “forget” the pairing), make sure they can see the infrared bar, plug in the secondary accessory (for certain games), put in a disc or download a game, click start, wait for it to load, and then if you’re lucky you get to play. That’s seven steps. The NES, Genesis, and Atari all have three: put in a game, turn on the system and press start. The controllers are already attached — seriously, who unplugs them?

2. Ease of use, part 2 — The NES controller has four buttons: A, B, select, and start (the Retron adds three more: slow, turbo-A, and turbo-B). The Genesis has four as well: A, B, C, and start. The Atari has only one; the SNES has eight but you rarely use L and R. When I got my PS1 I was blown away by how many buttons I had to use, which was only compounded when the dual-analog controllers were released and I had to figure out whether to use the D-pad or the stick. The PS2 added the ability to click the stick. The Gamecube (which I had) required a very specific type of hand-holding to make sure all the buttons were hittable, and even then sometimes you had to readjust to hit L, R, A, B, Cup, Cdown, Cleft, Cright, Z, the D-pad, the analog stick, and start. But about two weeks ago, I handed my daughter the NES controller and said, “use the arrows to move around the screen, B to fire, and A to use your superweapon” and she was set. Next-gen consoles are way too complicated.

1. Old != challenging — Just because the NES and Genesis are old systems doesn’t mean they’re not full of challenging games. Right now I’m playing the original Dragon Warrior, which I was never able to defeat before. I’m using an online walkthrough, but that doesn’t take away from my enjoyment; rather, it allows me to avoid the frustration of not being able to find the Magic Whatsit or get to the easiest path through the Swamp of Doom or whatever. After that, I might try my hand at the original Final Fantasy. And non-RPGs are still challenging too; I have yet to beat Castlevania, Contra, Hudson’s Adventure Island, and countless others. Why spend $60 on a new copy of Madden every year and then waste hours on load time over the life of the game when I can pop in Tecmo Bowl or Joe Montana’s Sportstalk Football II (one of my favorites from when I was a kid) and be challenged in moments? I’m just saying: next-gen consoles have their place, but I’m fine with the old stuff sometimes.