SIX OF THE BEST… things about American Girls

SIX OF THE BEST… things about American Girls

Parents and relatives of girl-children I’m sure let out a massive groan when they hear the latest exploit of the American Girl doll company. They complain that the dolls are expensive, that the company artificially inflates demand by limiting supply, that the stores are a madhouse most of the time. And all of those things are true.

But there are some good things about the dolls. Here are six of them.

6. They’re educational — Say what you will about the actual quality of what is being taught, but each of the girls has her own backstory, and usually that backstory is presented in a companion book. I’ve read a little of one of them (the McKenna one), and while McKenna’s story is more about overcoming injury and personal challenges, some of them are actually more historical in nature. Kit Kittredge, Rebecca Rubin, Josefina Montoya… all three of these characters have stories that teach readers important lessons. If the dolls get kids to read more, so much the better. Oh, and the lessons aren’t just historical; there’s also plenty of material on how to be a good person, stand up for what you believe in, et cetera. 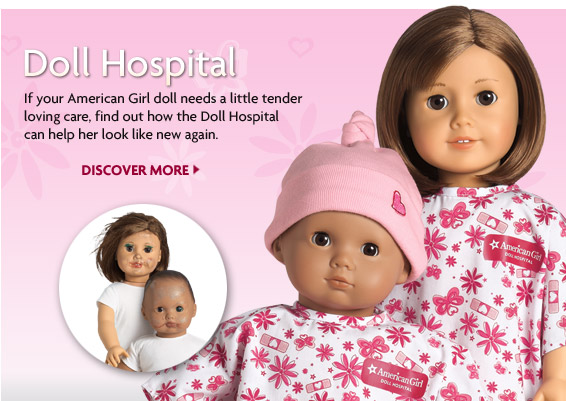 5. They’re durable — My daughter has three American Girl dolls at this time. They’ve all survived countless outfit changes, trips to be with family, drops from reasonably high locations, knotted hair that gets brushed out, and being carried from place to place. I mean, sure, if you run over the doll with a truck you’re going to crush it, but in terms of durability they seem to be okay. The only problem we’ve had is that McKenna’s ear piercings have somehow closed up, which doesn’t even make sense given that the store punched holes in a plastic doll’s head, but it is what it is.

4. They’re inclusive — While a little more racial diversity would be nice in the line of official American Girls, there have been at least three official dolls that are non-white — Kaya, Addy, and Josefina. But the store also will make you a doll that looks as close to you as a doll can — they have several choices of head, hair, skin, eyes, and mouth, and while these dolls do cost a little more (and probably are worth a little less on resale), it’s still better than some lines, which force you to buy only what is available. 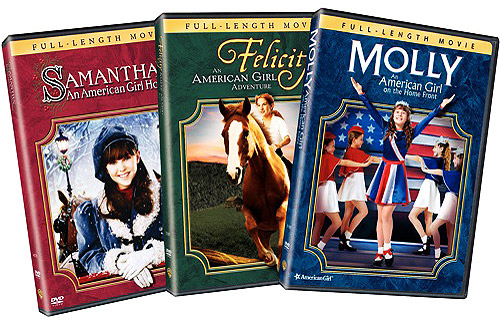 3. They have movies — What do kids love more than playing with their dolls? How about having their dolls by their sides while they watch a movie about the character their dolls are based on? And, better, knowing that there’ll be a new movie every year! The movies themselves aren’t necessarily super-awesome, but they do bring in one or two well-known actors each time (McKenna has Nia Vardalos, Saige has Jane Seymour, and Kit — arguably the most recognizable character in the pantheon — has Stanley Tucci and Joan Cusack). Again, the films are a bit whitewashed in terms of the stars, but most of the characters have at least one non-white friend/family they associate with. Plunk your girl and her doll in front of the TV and you’re set for an hour and a half of whatever you like, because she’s not going anywhere.

2. The accessories are just expensive enough — One of the hardest things about having kids is teaching them the value of money; my daughter still doesn’t understand just how much rent actually costs. American Girl outfit sets and accessories aren’t cheap, but they’re not super-expensive either. In fact, if a kid gets five bucks a week in allowance, she can walk through the store and determine what she wants to save up for. Most of the clothing sets cost a month — maybe five weeks — to earn, and if kids have to behave to get their allowance money, then that’s a plus for the parents. Now, that said, I do think they’re a little overpriced (given that a Starcom or Transformers toy was $20 or less when I was growing up), but on the bright side Target offers a much-less-expensive line called Our Generation, and everything fits American Girl dolls… and going to Target is usually easier than going to the AG store anyway. 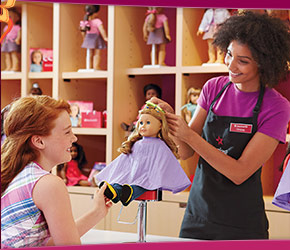 1. The stores are an experience — Walk into an American Girl store (if you dare) and see what I mean*. Yes, they’re organized into the various dolls’ accessories and time periods, but the Lego store does that too. But the store knows it’s a destination for girls and their families, and they make a point to enhance the experience whenever possible. They do birthday parties; there’s a salon for fixing up the dolls’ hair (and piercing their ears); there’s a bistro where girls, their dolls, and their families can have lunch or tea; and even the checkout area is manned by nice people who know their audience and treat the kids well. Despite the constant influx of humans (and dolls), everyone at the store does their best to make the girls happy and keep the parents coming into spend their money. I think a lot of companies who aim products at kids forget that.

It’s cute the first couple of times. And then it gets old.

Neither the author nor this website received any compensation, monetary or otherwise, for the production of this column.

* I’m using the Atlanta Location. Your experience may vary.