It’s good. It’s not the best show ever in the whole universe, but it’s good. What they do in terms of tension and dread with what (in the beginning of the 2005 run) they had for effects and budget is kind of amazing. And it’s very funny.

Right now we’re in the second Matt Smith season (my daughter started with him) and it’s going fairly well. But so far I’ve seen the most David Tennant episodes — that is, the Tenth Doctor. So here are six of the best Tenth Doctor episodes. At least, in my opinion; yours may differ. Spoilers abound. 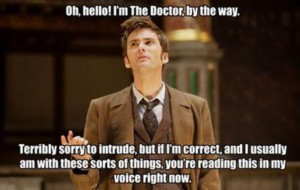 6. “The End of Time” — “I open at the close,” eh? This is Tennant’s final episode, and it’s a doozy. It brings back almost everyone from Tennant’s run in one way or another, and finally — finally — Bernard Cribbins (Donna’s grandfather) made it into the credits. The Master returns, using a wealthy man’s (and his daughter’s) love of science and fear of death to manipulate them into rebuilding a device that turns every human on Earth into a replica of the Master. It was a crazy moment.

I loved the coda at the end, even if it did get a little too Return of the King for me. I’m a big fan of bringing everyone back, and this scratched that itch. 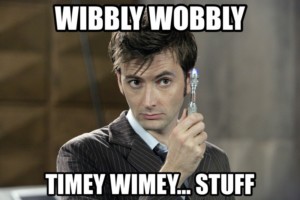 5. “Turn Left/The Stolen Earth/Journey’s End” — This quasi-three-parter is the finale of Donna’s season as companion. “Turn Left” shows Rose helping Donna to overcome the Time Beetle and restore the timeline to its normal form, where the Doctor is alive. “The Stolen Earth” shows the creator of the Daleks, along with our perennial enemy Dalek Caan, bringing planets to an inter-universal rift. It ends with the Doctor about to regenerate, but in “Journey’s End” he regenerates into his formerly-removed hand from way back in his first episode. Davros’s plot, to destroy the entire universe, ends when Donna is accidentally turned into a temporary Time Lord.

I get a kick out of multi-part arcs that are more than just two episodes long, and while the Doctor barely appeared in “Turn Left”, it really was the first of a three-parter, even though it technically is its own episode.

Best part: When we see the Doctor’s face after he explains to Wilf what must be done. 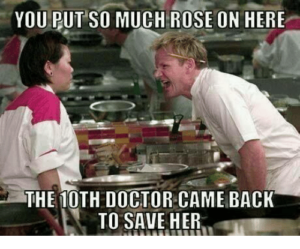 4. “Rise of the Cybermen/The Age of Steel” — Parallel universes. Cybermen taking over. Figuring out what’s different. It’s sometimes silly, I know, but, I mean, my favorite TNG episodes are “Parallels” and “Cause and Effect”, so you’d expect me to love this one.

Basically, in “Rise of the Cybermen” the TARDIS is jerked sideways into another universe where everyone wears phones implanted in their heads and an industrialist is trying to turn everyone into robots. Which does happen. Then, in “The Age of Steel”, the Doctor destroys the Cybermen by giving them back their emotions, and Lumic dies when Rose’s parallel universe father cuts the ladder he’s hanging from. At the end, Mickey stays in the alternate universe. 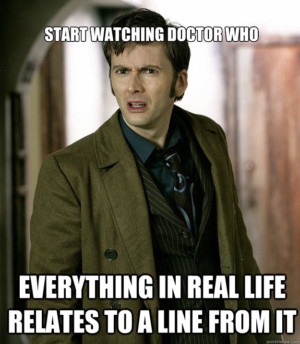 3. “Army of Ghosts/Doomsday” — Cybermen again? Really? “Army of Ghosts” gives us a world where ghosts are normal, but at the end we figured out that they were really just Cybermen trying to break into our world. Which they do, at the end, thanks to Torchwood, just as Daleks start to invade as well. “Doomsday” picks up with the Daleks and Cybermen fighting each other before the Doctor and Rose open the breach to the alternate universe… which also sucks Rose in.

I both love and hate unrequited love stories, especially when they come at the expense of characters not just talking to each other, and I was so mad at the end when the Doctor didn’t just say how he felt. Would’ve solved so many problems. 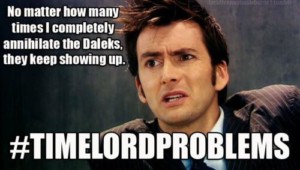 2. “42” — Y’know what I like about real-time episodes? That there aren’t that many of them. But this one was really cool because the Doctor and Martha had literally 42 minutes to figure out what was going on and save everyone. As it turns out, the reason the star was trying to kill the people on the ship is because they accidentally stole part of its heart. Oops.

The episode by its very nature had to be fast-paced, with little room for anything extra (even though some parts did unfortunately drag a bit). I liked it more for its premise than the actual content, I think. The star-monster wasn’t super exciting, the pub quiz passwords were dumb, and the fact that we knew Martha wouldn’t die in the pod (nor would the Doctor die from being possessed by the star-monster) took away a lot of the tension. But I do like Martha. She’s fun.

Best part: Finding out that Martha’s mother is under surveillance… but why? 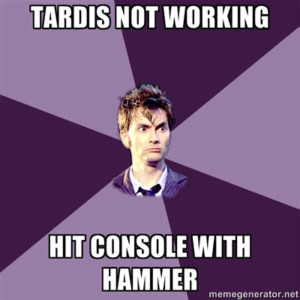 1. “Blink” — Oh, like it would be anything else. I mean, the damn thing won a Hugo award, back when they still counted for something. It was characters trying to figure out clues from the Doctor and Martha, repeated time loops that had to nest together perfectly, and an absolutely terrifying concept for the monster of the week. I know Steven Moffat gets a lot of shit — more than a little of it deservedly so — but this was a great episode.

The plot is actually pretty simple: evil aliens are killing people, and they’re almost impossible to escape because they’re either statues or they’re attacking. The Doctor and Martha, trapped out of time, have to engage a photographer and a video store clerk to stop the Angels before it’s too late.

Best part: “Don’t blink.” Also, how the Doctor tricked the Angels into defeating themselves. A very Doctor thing to do. 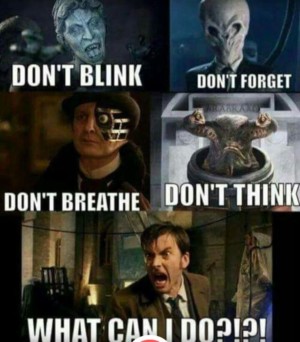 In case you’re interested, the episodes that didn’t quite make it into the top six: 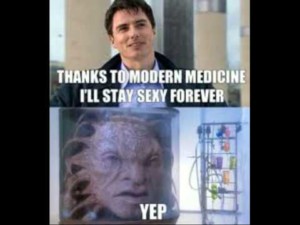