I started reading Star Trek tie-in novels in the mid-80s. My dad hurt his foot badly and was in the hospital; my mom picked me and my sister up from camp and took us to the bookstore, saying “we’ll be at the hospital for a while, so let’s get some books to keep you busy.” I hit the usual area and found a few things, but then I walked past an entire rack of Star Trek novels.

I immediately put back everything I’d picked out and took down three that looked interesting: My Enemy, My Ally by Diane Duane (still to my mind one of the best ever written) and Dreams of the Raven by Carmen Carter (which turned out to be pretty horrific, though a great book).

I was hooked. I still read the tie-ins. In fact, I’ve written a few articles about them on other sites.

The day I wrote this, I participated in a chat on IO9 about secret sex scenes — sex scenes in books that you don’t expect to find them in.

Well, my parents didn’t realize this, but nine-year-old me was reading novels aimed at adults. I was an advanced reader, to be sure, but I’m pretty certain my parents would not have been pleased with me reading books with semi-explicit sex scenes in them.

Still, as an elementary, middle, and high school student, I read a lot of sex scenes, many of them in Star Trek tie-in novels. Here are six of the best… or, at least, six of the most memorable: 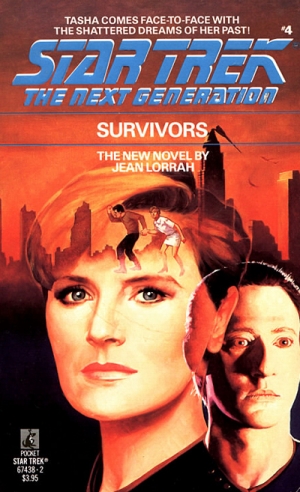 6. Survivors by Jean Lorrah — Long before the episode with Ishara Yar, author Jean Lorrah tried to craft a backstory for Tasha, and she did a marvelous job. However, the book does contain a scene in which young Tasha, maybe 12 or 13, is rescued by a Starfleet away team from a gang of rapists. Lorrah doesn’t get pornographic or explicit, but it was still quite shocking, especially for a book that I read at age nine. There’s also an amusing chat between Data and Tasha about Data’s seduction of the planet Treva’s leader.

5. The Ashes of Eden by William Shatner, with Judith and Garfield Reeves-Stevens — Slipped very neatly into the early part of the novel is a scene between post-The Undiscovered Country Kirk and Carol Marcus as they try to resurrect their relationship. Carol attempts to arouse Kirk using her hand, but is unsuccessful. I guess it’s realistic, but it’s not what I would call sexy. Still, it happened and it surprised the hell out of me. 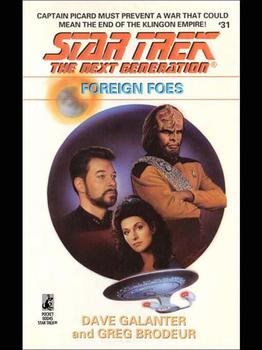 4. Foreign Foes by Dave Galanter and Greg Brodeur — In TNG, it was the first officer, not the captain, who usually got to have amorous adventures. But there weren’t a lot of books where Riker actually had sex, outside of the Peter David ones (which I will address shortly). In this one, though, he definitely is having sex with someone in the first 50 or so pages, but gets interrupted by his communicator. The scene was… okay, I guess.

3. Star Trek: the Motion Picture by Gene Roddenberry — In the film, it’s assumed that Decker has sex with the Ilia-probe, but in the book it actually happens. Also, there’s a rather weird scene early on where Kirk’s ex-wife Lori contacts him via holocomm and he feels — and I’m trying to remember the quote as best I can because it’s been 20 years since I read the book — “a pressure in his genitals”. Seriously? That was what the editor let Roddenberry go with? Le sigh.

2. Masks by John Vornholt — Not only is this a great adventure novel, but it also has Captain Picard having sex with a master swordswoman. There’s some pre- and post- activity, but no actual “doing it”, though my ten-year-old self appreciated the descriptions of the swordswoman’s body. 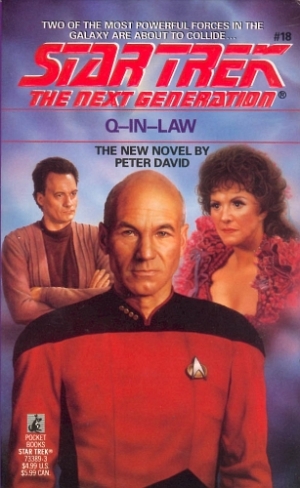 1. pretty much anything by Peter David — David is bar none the funniest Trek tie-in writer ever, and many of his books contain sex scenes. He dips his toe in the water with Q-in-Law, where it’s quite clear that Wesley had sex with a foreign dignitary’s handmaiden, and in The Rift, where an officer on Pike’s Enterprise falls in love with a woman halfway across the galaxy, but it’s the New Frontier series where he really lets loose. Characters have sex all the time, often leading to hilarious consequences, but more importantly the sex is completely relevant to the plot and story. Because, y’know, real people have sex, even in the 24th century.

The original series tie-in Killing Time by Della van Hise actually included a Kirk/Spock romantic relationship. It got recalled by the publisher, but the copy I read had all the missing scenes. I think I got it from the library. I have another copy now that I got off Amazon, and I’m pretty sure the scenes aren’t there. But beyond that, it’s actually a rather good alternate-universe book, and whether your copy does or doesn’t have the slash in it, it’s worth a read if you like Trek.