SIX OF THE BEST… reasons not to watch The Defenders

It’s been a week and a half since Netflix dropped The Defenders on us, and I figure that’s long enough to wait for everyone who wants to watch it to have watched it. I mean, it’s only eight hour-long episodes; my wife and I finished it over the course of four days. This whole column will be filled with spoilers, so if you don’t want those, stop reading now.

I really wanted to like The Defenders. Netflix has had a 60 percent hit rate with me when it comes to their Marvel shows — I liked Daredevil S1, Jessica Jones, and Luke Cage; I didn’t like Daredevil S2* or Iron Fist. I figured The Defenders would take enough of what I liked that I would get a good show out of the deal.

Save yourself eight hours and just read this column, because I have six of the best reasons not to watch The Defenders right here. 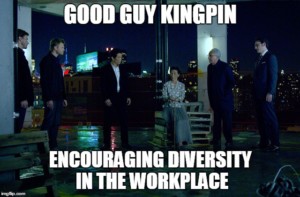 I was going to do assorted memes from various Defenders characters, but then I found “Good Guy Kingpin” and could not resist.

6. Iron Fist was the main character. — It is universally accepted that, in the Marvel Netflix Universe (MNU), Iron Fist season 1 was by far the worst of the five seasons that had aired. Danny Rand had no charisma, he was easily manipulated, and we learned by the end of the show that he really shouldn’t have been the Iron Fist at all. Plus, the secondary characters weren’t interesting (except Madame Gao), the subplots were all pretty obvious as to how they’d be resolved, and the show didn’t really give us anything new.

So of course Iron Fist would be the reason The Defenders exists, right? Of course he would be the key to their whole plan. Why not give us more of Finn Jones’s whisper-growl serious face? Why not let him bemoan that his family was taken from him by the Hand? Why not spend more time on the least likable character you’ve created by far? I mean, Iron Fist was less likable than most of the villains, for crying out loud. 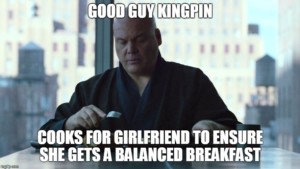 5. Madame Gao wasn’t the main villain. — Madame Gao appeared in three of the five MNU serieses leading up to The Defenders, and it seemed like she was the spider at the center of the web. But as it turned out that spider was Alexandra (Sigourney Weaver)**. Nothing against Weaver; I think she did a great job with her material. But she wasn’t Madame Gao. Alexandra’s character arc wasn’t interesting, and her changing the plan was the Hand’s downfall. I realize she needed the Substance to renew her body or continue her immortality or whatever, but Gao counseled against accelerating the plan. If Alexandra had just told Gao why she needed to do this, maybe things wouldn’t have gone down the way they did.

Besides, Madame Gao was just more interesting. She had intelligence, she had power, she commanded legions, and because she was old she invoked Rule One. I mean, even Kingpin showed her respect despite the fact that he was… well… a kingpin. And she clearly could manipulate Iron Fist into making mistakes. She should have been the main villain, or they should have made the main villain someone we didn’t expect, instead of a rich, composed, elegant white woman. Because we don’t have enough of those. (And by the way — I really thought Gao would be the one to kill Alexandra.) At least we didn’t see Madame Gao die; if Daredevil somehow survived, perhaps so did Gao. 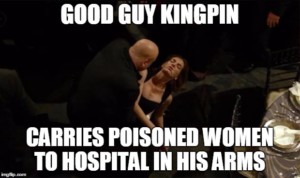 4. The plan was too complicated. — In order for the Hand’s plan to work, they had to create the Black Sky (a terrible name for a human weapon), find an Iron Fist they could manipulate, dig an enormous hole at 11th and 44th where they somehow knew a weak point between Earth and K’un Lun existed, build a building on top of it to camouflage it, train the Black Sky once she was finished being brought back to life, and then hope they could get the Iron Fist in the right place at the right time. And none of this would have worked if Elektra hadn’t caught Danny’s fist and diverted it to the wall in the right place at the right time.

Let’s look at the other plans we’ve seen so far:

So that’s one out of five (or two out of six if you’re including Diamondback).

If you make the evil plan too complicated, the readers/viewers can’t follow it. If they can, you’ve introduced so many variables that a savvy reader/viewer will poke holes in it and not enjoy it as much. 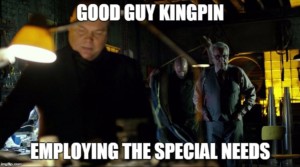 I loved Melvin. I hope we see him again.

3. It took forever to get anywhere. — The four main characters weren’t even in the same room until the third episode. The final battle didn’t start until the last one. There were diversions aplenty along the way. There were too many exposition dumps. It was just so slow — and if I’m saying that, as someone who likes a slow burn, then it was too slow.

Look, I get it: we had to get all the characters together, and establish what they’d been doing in the months between the ends of their respective shows and the start of The Defenders. Seeing Matt as a lawyer was kind of cool; Luke Cage’s freedom was glossed over; Trish is still talking; Iron Fist and Colleen are hunting the Hand. But we didn’t come to see 13 percent of the show be “previously on the MNU”. We needed to get the four characters together faster, and spend less time putting together situations where they just happened to meet each other. 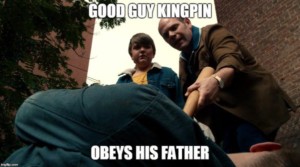 2. Where were the Avengers? — Okay, okay, this isn’t exactly a new complaint. And I know why you can’t always bring in every Marvel character to deal with an emergency. I mean, hell, shouldn’t Iron Man have been around to help out at the end of Winter Soldier? Couldn’t the other Avengers have helped Thor at the end of The Dark World? In the first five MNU seasons, there was no huge world-ending problem that needed to be addressed; everything was limited to smaller parts of New York City. But when you have an unexplained earthquake in New York City (where Iron Man lives, as do the Fantastic Four, and Spider-Man, and Xavier’s School isn’t too far off either), why wouldn’t the other superheroes come to help?

The bigger the Marvel universe gets, the bigger the problem becomes. As shows continue, stakes have to get raised higher and higher, and that usually leads to mass destruction on a scale that one would think would get a superhero to show up. And yeah, Iron Man can’t be everywhere at once, but at least a mention of one or two of the other heroes helping out during the earthquake would’ve been nice. 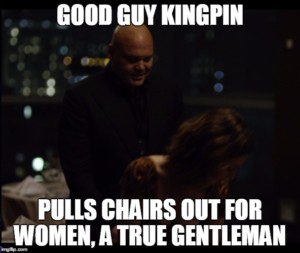 1. Ultimately it was a show about a guy saving his ex-girlfriend from an evil organization. — The moment Matt realized Elektra was being used by the Hand, his only goal was turning her back into herself and freeing her from the Hand. The whole thing about Danny needing to put his Iron Fist in a keyhole, or Jessica and Luke’s tenuous friendship, or Matt trying not to be Daredevil… all of it went out the window. And in the end Elektra freed herself, which I guess explains why the Black Sky needs to be kept away from everyone and everything — because when you get resurrected with the Substance, your old memories are in there somewhere.

Now, to its credit, the writing during Matt and Elektra’s final fight was… well… okay. It wasn’t anything I haven’t seen (or written) myself, and in the end there wasn’t any suspense. It was obvious to anyone who’s ever read a comic book or seen a superhero movie or show that, by the end of the fight, Elektra would admit that she still loved Matt. I did like that it didn’t change her goal, that she was still willing to let them both die, but I just didn’t care. 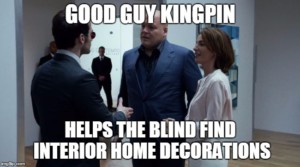 There were two major hero deaths in the show. One was Stick, who, like Shepherd Book in Serenity, was killed off toward the middle to show us that there were real stakes. The other was Matt, who died at the end — not quite as suddenly as Wash did***, but still.

Except Matt didn’t die. I mean, sure, we all knew Charlie Cox had been signed for at least one more season, and now that The Defenders is over any of them could show up in any other one’s show down the road, but after watching the characters mourn Matt’s death (that empty door scene, while a little contrived, still had a lot of emotional punch because we’ve gotten to know Foggy and Karen over the past two years) and then seeing him appear in some convent somewhere, not dead, took the air out of it.

I’m guessing that he survived because the explosion somehow “activated” the Substance (pretty sure it was made from dragon bone marrow) and he ingested enough of it, and was trapped down there long enough, for it to affect him. Not sure how he got to the convent but I guess they’ll cover that.

Still. You have to have stakes that count. Otherwise why should we care? And, ultimately, I think that was the main problem with The Defenders: I didn’t care about any of the stakes, and that made me see all the problems with the show.

(To be fair: I did think there was a lot of good dialogue, especially when the heroes were together, and Luke Cage is an amazing character the way he’s being written in the MNU. His speech to Danny about privilege was exactly what people needed to hear. But The Defenders wasn’t a great show overall, and it should have been.) 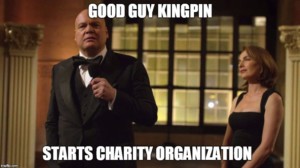 * There was no way in hell that Ellison should have given Karen the job and office left behind when Ben Urich died. She had literally no reporter experience, whereas Ben had been working for the Bulletin for decades. For more on this, read last week’s column.

** I promise I didn’t start this metaphor with the end goal being someone named Weaver. It just turned out that way.