SIX OF THE BEST… reasons that nerds + fantasy football = awesome

SIX OF THE BEST… reasons that nerds + fantasy football = awesome

With the NFL season about to start, the usual comparisons are going around about how fantasy football is just “D&D for sports fans”. And when you think about it, it really is: you assemble a party (your team), go out on missions (games), increase your stats (earn points), fight battles (head-to-head matchups), add and remove party members (trades and waiver wires), and eventually build up to a big Boss Fight (the championship game).

But the generic articles on news sites don’t often focus on six of the best reasons that nerds + fantasy football = awesome. That’s what I’m here for. 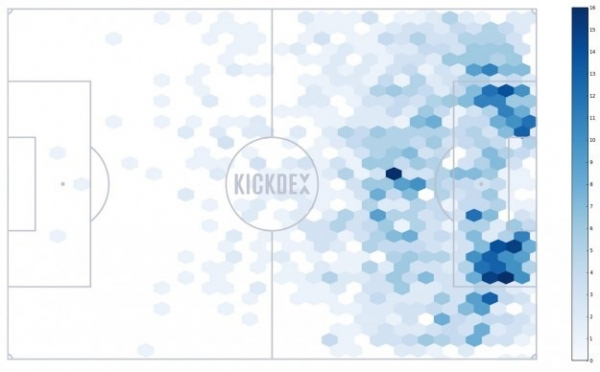 6. We see the game as data, not as a sport. — The fantasy football forum that I’m on is run by a couple of guys who live for the data of the game. And when you play fantasy, you really have to see the game as data points, not as players on a field. There’s so much information available that even advanced fantasy players don’t see… but we nerds do. We look at crazy stats like first-downs and INTs returned for TDs. We care about who gets put in on third down or on the goal line. We put all that data into our enormous brains and turn it into big wins.

5. We can keep track of multiple teams at the same time. — The first year I played fantasy football, it was as part of a “bloggers league”, and while it took me a bit to get into the swing of things (I lost 7 straight), I made a great trade halfway through the season that had me finishing strong (won 7 straight and missed the playoffs by that much). I was hooked, and the next year I had four teams. One year I had as many as six. This year, I have three, which is low for me — four is my average. But because all the players are data points, fantasy fans can run as many teams as their brains can handle, setting the best lineups and taking home multiple championships. Of course, this can backfire if our “winning strategy” of picking the same guys when possible ends with one or more of them injured. Which does happen.

4. We now have a reason to watch football with our sports-minded friends. — When football season comes around, many of us nerds lose our friends to their favorite sport. (Baseball, basketball, and hockey all have so many games that it’s easier to be a casual fan; football has 16 games that matter, and four weeks of playoffs including the championship.) We used to go hiking or play Team Fortress 2 on Sundays, but now some of us are watching football instead, or even going to games. Fantasy football fans, as connected as we are to the data streams we get online, can always benefit from watching what happens around the ball — for example, maybe a certain guy is being taken out of the game on long downs, or maybe a certain QB never throws to a certain WR when it’s second-and-long. Watching the games adds additional data points, and it can be done in social settings (parties, bars, etc). Fantasy football gives us the knowledge of who’s playing and allows us to speak intelligently to our football-loving friends. Just, make sure to pick a favorite team.

3. We can be more social with our co-workers. — A lot of nerds have issues being social. Less so than in previous decades, but still. Fantasy football often happens at work — after the Final Four, it’s probably one of the biggest time-wasters that doesn’t rhyme with “ace hook” or “fuzz greed”. Because we’re watching games — with our friends or even by ourselves — we can join conversations and say such things as “yeah, Peyton’s throw on fourth-and-four was awesome; I can’t believe he fit the ball in that tiny window” instead of something like this: 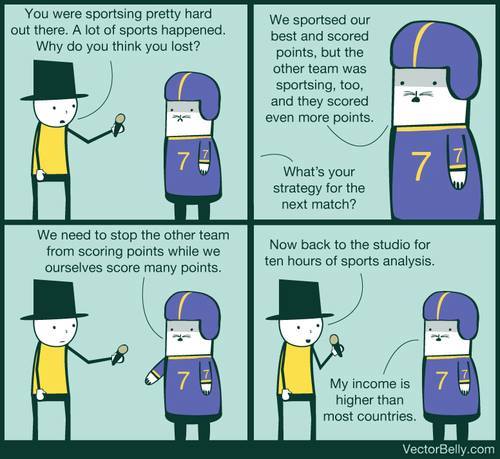 2. We aren’t swayed by team affiliations. — Back in #4, I said to pick a favorite team. That doesn’t mean you have to love them above all others, just that you say, for example, “I root for the Browns.” I grew up — and still am — a Miami Dolphins fan. One of my friends is a Patriots fan*. But despite that, when we play fantasy football we put our team affiliations on the back-burner. I’ve won multiple leagues with Tom Brady on my team, and… well… he drafted Ricky Williams. Oops. But the thing is, college football fans will draft guys from their school (in my fraternity draft, UCF guys always go too soon**). Fans of the Steelers will make a point to draft Steelers players***. You can use this to your advantage and get better guys for your team.

1. We can always find new wrinkles to the game. — Basic fantasy football is head-to-head, where two players pick their best teams and the one who scores the most points wins. But there’s so much more to it than that. Here are some leagues I’ve been in and/or heard of:

There’s something for every nerd in fantasy football. Give it a shot. First one’s free…

Many people play fantasy football for money. The commissioner of the league collects $25, $50, $100, or sometimes even more, puts it in a bank account, and at the end of the season pays it out to the winner. When I run a money league, I set the entry fee at $30. That gives me enough to pay out to the winner, #2, #3, and the top point scorer. And if you set aside $10 or $20 to order a trophy, that’s even better — money is great, but bragging rights are even better, especially when it’s a work league and you have the trophy on your desk where everyone has to see it. Just make sure that your company is okay with it, because it is technically sports gambling.

* On opening Sunday every year, we put on our jerseys and go out for wings, beer, and football-watching. It gives other bar patrons pause to see a Dolphins fan and a Patriots fan being friendly, instead of icy-cold and prickly. For those who don’t know, the Patriots are the Dolphins’ #2 worst enemy after the Jets. But, really, no one’s a Jets fan anymore because they suck balls.

** These guys are insane. Here’s two examples: Matt Prater, the kicker for the Broncos, is pretty good these days. But he missed an extra point in a championship game for UCF, so whenever someone drafts him in fantasy, that guy gets ridiculed. And last year, when someone drafted Blaine Gabbert (former QB of the Jaguars, now backup for the 49ers), I made a joke and I was jumped on because Gabbert’s younger brother was UCF’s backup quarterback.

*** I heard tell of one league of Colts fans where you cannot play any players on teams against the Colts. So, for example, if you have Tom Brady and the Colts are playing the Patriots, you may not start Brady. It adds a really challenging wrinkle to the game.