SIX OF THE BEST… musical episodes

It’s no secret that I enjoy musicals. I can still sing along to most of my favorites, although honestly not very well because I’m not a great singer.

I also enjoy musical episodes of TV shows, because they showcase talents that we don’t normally see our leads using in their regular roles. Whether the episode is meta, one-off, or plot-advancing, odds are good I’m going to enjoy it, and probably buy the soundtrack.

So, with that said, here are six of the best musical episodes — specifically, on shows that aren’t musically-oriented. (So, no Glee or Empire. And just so you know, I’ve never watched most poopular sitcoms so those probably won’t be on here. Sorry.) 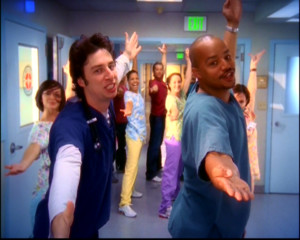 6. “The Devil’s Hands Are Idle Playthings”, Futurama — Futurama is by far one of the best Western animated shows produced for adults. It will make you laugh, cry, and think, sometimes in the same episode. It’s been cancelled several times, and it’s the first cancellation where we got to see “The Devil’s Hands Are Idle Playthings”. Fry makes a deal with Robot Devil, writes an opera to demonstrate his love for Leela, and then, at the end, after he loses the robotic hands, plays the end of the opera — poorly — for Leela, who seems to appreciate this.

Best song: Really, the whole third act is a song montage, but the sweet little musical cue at the end makes it all worthwhile. But I also like “Take My Hands, You Evil Metal Dork”. 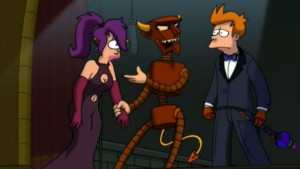 5. “Les Miserables”, Honest Trailers — Honest Trailers has done several musical episodes — usually related to kids’ animated films like Frozen — but if I’m remembering right their episode about the Hugh Jackman-starring Les Miserables is the first they did for an adult-targeted film. And it is hilarious. As usual, the writers (and Jon the voice guy) skewer the film’s many flaws (including the fact that someone let Russell Crowe sing) 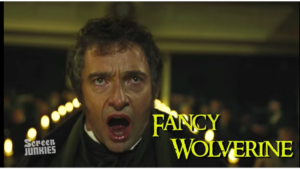 4. “Fan Fiction”, Supernatural — Through the entire run of Supernatural, there’s been an underlying theme that Chuck the Messiah (and possibly God Himself) dealt with his visions by turning the adventures of Sam and Dean into a somewhat-successful cult book series. From there we get conventions, cosplayers, and finally a student at a girls’ school writing a musical based on the lives of these so-called fictional characters. It was one of the show’s sillier episodes, but I loved it anyway, and it did shine a self-referential light on the characters’ behaviors, which they themselves even note toward the end.

Best song: While “A Single Man Tear” is pretty hilarious, it strays a little too close to Wincest for me, so I’m going to go with the actresses’ performance of “Carry On My Wayward Son” is a really great cover of a song that’s already pretty awesome. 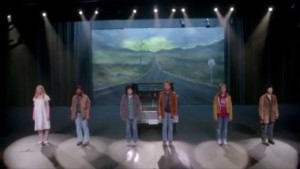 3. “Song Beneath the Song”, Grey’s Anatomy — Employing a well-used trope, Grey’s Anatomy uses a traumatic brain injury to one of the characters to turn the entire show into a musical that also manages to advance the plot. The show itself depends upon music to set scenes and control moods, even more so than David Ayer tried to do with Suicide Squad, and this episode was a logical outgrowth… even if some of the actors aren’t really the best singers and did everything they could to minimize their parts. It was made up for by some unexpectedly-great performances from Kevin McKidd, Chyler Leigh, and Chandra Wilson.

Best song: “The Story”, originally performed by Brandi Carlile, is given its own spin by Broadway actress Sara Ramirez, who imbues it with such pain and anguish and hope that it really does blow the original out of the water. The orchestration helped too. It’s because of this version that I asked to have the song played at my wedding. 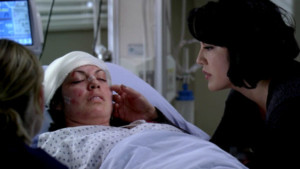 2. “Psych the Musical”, Psych — Psych has a habit of doing homages to other shows and films — they did a Twin Peaks episode as well as a Clue episode — and while these homages aren’t always the best, they can be taken as funny little asides. The same goes for “Psych the Musical”, which is a relatively straightforward plot (Shawn has to figure out who committed a murder, and the only thing he knows is that it wasn’t Z, the ostensible suspect) with a ton of padding… which is basically every musical ever. It wasn’t a great episode, but it was fun, and I liked it. That is, when I finally was able to see it.

Best song: “I’ve Heard it Both Ways” refers specifically to Shawn’s habit of misrepresenting something and then covering for it by saying “I’ve heard it both ways.” It’s a funny battle song between Shawn and his erstwhile nemesis, Detective Lassiter (who has a hell of a range), and it’s far catchier than I expected. 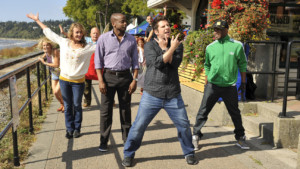 1. “Once More, With Feeling”, Buffy the Vampire Slayer — Yeah, like you expected anything else to take number one here. But what I loved most about this episode is that it wasn’t in any way a throwaway; without it, the rest of the sixth season makes no sense. Plus, I wasn’t expecting performances like we got from Amber Benson, Emma Caulfield, and Sarah Michelle Gellar. I knew Anthony Stewart Head and James Marsters could sing, and Nicholas Brendon gave it his best shot and didn’t suck. There had been musical episodes before and since on other shows, but I think this one is the gold standard.

Best song: While the subversive ending of “Under Your Spell” is a cute little twist, I have to give it to “Walk Through the Fire”, not only for the orchestration, arrangement, lyrics, and performances, but because it’s really an encapsulation of the entire show — specifically the culmination of Buffy’s mental state throughout the first part of the sixth season. 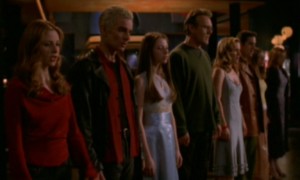 There is one musical show that I’ve watched the entirety of: Galavant. And not just because my cousin is the lyricist. It’s actually very silly and funny, and I love the lampshading of fantasy tropes. Plus, if you don’t super believe in Tad Cooper, then there’s something wrong with you. 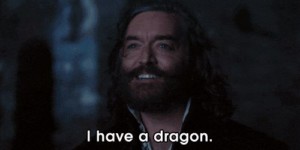