SIX OF THE BEST… memories I have of watching GLOW

I think it’s safe to say that most Americans have Netflix. And because Netflix isn’t stupid, when they come out with a new show that they produced, they put it where you’ll see it. Therefore, most Americans (and I’m sure other folks worldwide) know that Netflix has a new show out called GLOW, a dramatized version of what was once an actual women’s wrestling promotion of the same name in the late 1980s.

I watched GLOW a little bit — I was into pro wrestling at the time (primarily NWA, with some WWF on Saturday mornings) — and I would love to give you six of the best memories I have of watching the actual GLOW, but I only remember one part of one episode, and after I tell you six of the best things about Netflix’s GLOW, I’ll tell you that. 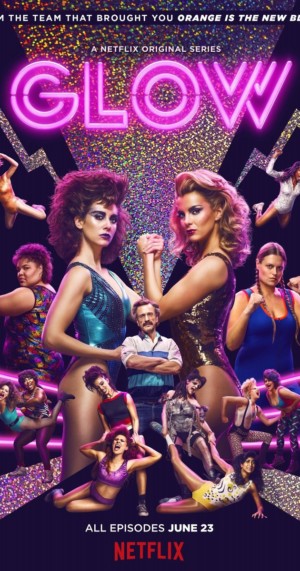 6. The wrestling looked real. — Wrestling isn’t fake. It’s scripted, but not fake. Every person who is a professional wrestler has to train, learn, practice, and work hard to make it look real in the ring. And they do get hurt — a lot. For GLOW, wrestler Chavo Guerrero Jr served as the wrestling coach, and whether you like Chavo or not he has definitely put in the work over the years and knows what he’s doing.

But… I think the show may have pulled back the curtain a little too far in terms of how the wrestlers choreographed their matches. I know that some pro wrestlers are known for mapping out their matches, move-by-move, but not all of them do it. 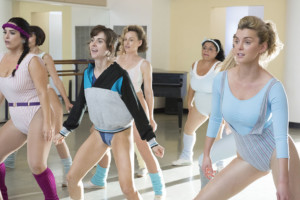 One of the more ridiculous scenes from GLOW.

5. Most of the non-main characters had good story arcs. — Some of the arcs were light on the drama, like Jenny (Fortune Cookie) having a thing for birthdays or the Beatdown Biddies being fun-loving prank-callers, but the others were really interesting. Carmen (Machu Picchu) defied her family to be on the show; Arthie (Beirut) was working her way through college; and Cherry (Junk Chain — probably the most ridiculous name on the show) was a stuntwoman who wanted an on-camera role and felt she was being passed over for some reason.

But… I think way too much time was spent on Mark (Debbie’s husband). He was bland and annoying. I know the cheating and separation led to the heat between Liberty Belle and Zoya the Destroya, but every time Mark came on screen I zoned out. 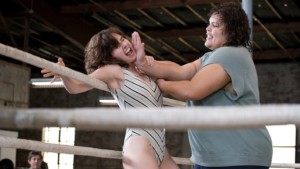 Carmen (Machu Picchu) was one of my favorite side characters.

4. Sheila the She-Wolf — Throughout the show, we got tantalizing hints of Sheila’s character. All we really know is that she lives as a wolf, wears her outfit every day all the time, and puts a lot of effort into looking and acting a certain way. We don’t know much about her past except that she’s lived as a wolf for five straight years and she gets birthday scratch-off tickets from her aunt. But revealing a character like that makes me want to know more about her, and I’m looking forward to learning more next season.

But… I really hope that Sheila’s wolf-ness came from something other than sexual assault by a male authority figure, because as often as that does happen — which is sad and terrible, don’t get me wrong — in fiction it’s overdone.

3. The show addresses women’s issues without proselytizing. — There’s an abortion episode that also addresses menstruation. The women deal with workplace issues, sexism, marital strife, and even how hard it is to be friends with your competition (to some extent). Admittedly this is set in the 80s, but even now these are huge issues, especially given the kind of government Americans elected last November. At least in the 80s women were just treated badly due to institutionalized sexism, not because the men in power actively hated or feared them.

But… Sometimes it went a little too far with other things, such as when Welfare Queen and Junk Chain went up against the Beatdown Biddies in their KKK outfits. Yes, I know all four characters discussed it beforehand, but it just rubbed me wrong that they even went that way in the first place. 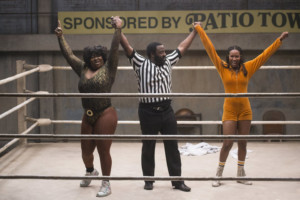 I loved how supportive Keith (the ref) was of his wife (Cherry/Junk Chain).

2. The women were unapologetic. — Most of the women in my friend group are unapologetic about their wants and needs. The women on GLOW were the same way, at least to each other. Rhonda wanted to have sex with Sam, so she had sex with Sam. Ruth wanted to know more about Russian culture, so she unapologetically went to a Russian Bar Mitzvah and interacted with people despite how uncomfortable it probably was.

But… These women were all actors (the characters, I mean), and they all lived in LA. There’s a different way actors think, and LA is generally ahead of the curve. I wonder how much this actually occurred among non-actor non-LA-based women of the mid-80s. 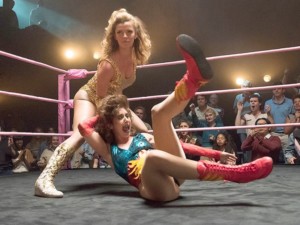 Betty Gilpin (Liberty Belle) showed up in American Gods as well. I was not expecting that.

1. It was funny. — GLOW was really more of a dramedy than a sitcom, but every episode was still pretty damn funny. Even the hard moments (like when Debbie and Ruth come to a tentative detente or when Sam is supporting Ruth at the clinic) still have some levity, and given that this show was made by the same people who made Orange is the New Black, I wasn’t surprised. I stopped watching Orange after the third season (I tried the pilot of the fourth but found that I just didn’t care enough), but I liked the first three well enough. I hope that GLOW outlasts that, in terms of its appeal to me.

But… Sometimes, as with the robot, it got a little too ridiculous. Sometimes, as with the final episode, in the scene before Debbie came out of the crowd to take on Zoya, things went on a bit too long and felt uncomfortable — and not in a good way. And sometimes I felt like just wanted more of a certain scene, but the show went somewhere else. 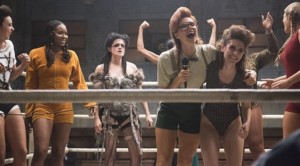 Probably THE most ridiculous scene in the entire show: the GLOW rap.

Here’s what I remember from GLOW.

There was a feud going on between a larger woman — I think perhaps her name was Fiji — and someone who may or may not have been called Tammy the Farmer’s Daughter. Anyway, I remember a match where Fiji just beat the hell out of Tammy, until finally something happened, Tammy hulked out, and she defeated Fiji.

The storytelling really appealed to elementary-school-age me. Hey, what can I say, I love a good underdog story. In fact — and here’s a clumsy tease for a book I’m releasing in November — I love to end stories with the underdog finding a way to defeat the sure-fire winner. I hope I pulled it off; I guess you’ll have to buy the book in four months and find out. 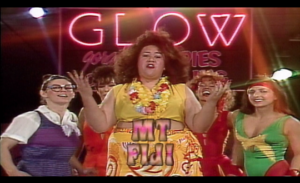 Yup, it was Fiji.