Recently at work I’ve been interviewing a lot of people — some for my team, and some for a colleague’s team. I have a list of questions prepared; some are super-boring (“tell me about a time you had a conflict with a co-worker”) and have to be asked because otherwise HR will be grumpy. 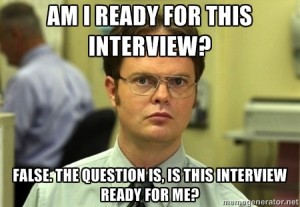 But others are more fun — and more insightful. Here are six of the best questions that I ask in every interview:

6. How familiar are you with using internal support ticketing systems? — I’ve written about these in the past. I ask this question first to see what types of systems candidates have used, and also to get an additional insight on how they feel about process. There are a few major systems out there, and I know the names of most of them, so I know if someone is telling the truth. I’ll usually follow up with a question about ticket processes: how people at their current job handle ticketing. Especially their customers.

Best answer so far: There’s no “best” answer to this question, but I always like it when someone says they’ve used JIRA, because in my (unpaid) opinion, it is the best one out there. I know a lot of companies like to use Salesforce, but for my money it’s way too complex and doesn’t work well for development projects. 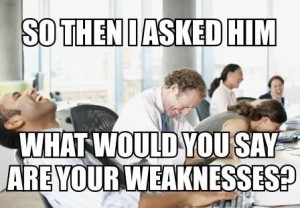 5. How do you prioritize when you have multiple projects with similar or overlapping deadlines? — Full disclosure: my boss actually wrote this question and put it on our master list. But it’s a great question because it’s not a sometimes thing in the business world. It’s always. No matter what job you’re in, you’ve dealt with this; no one gets to work on only one thing to the exclusion of everything else. Deadlines shift all the time, sometimes giving candidates more time, but often giving them less. I ask this question because I want to see how a potential colleague is going to handle the giant stack of requests my team deals with every day, and what his or her prioritization system is like.

Best answer so far: I like when people don’t say “I talk to my manager first”, because often that’s not possible. My boss is in meetings pretty much every hour of every day, and I have to be a self-prioritizer. Unfortunately because of my current role people think I want to hear “I talk to my manager first”. I promise I don’t. What do I like to hear? A clear path of how you plan to prioritize. Whether it’s by spend, effort level, date, or deliverables is immaterial. I want you to have a plan that makes sense. For what it’s worth, I personally go by date, and then level of effort — I prefer to knock the easy things out first unless there’s a difficult thing due soon. 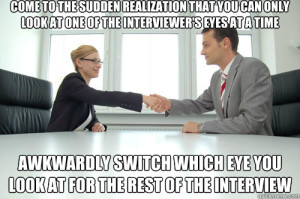 4. What’s one thing about our industry that you would change if you could? — It doesn’t matter if you’re a grocery bagger, barista, accountant, software developer, or CEO; there’s always going to be something in your industry that you think is being done wrong by everyone. Candidates shouldn’t have to think very hard about an answer to this; if they’re applying for a job on my team, they should have an answer ready, even if they haven’t done a job quite like this before. When I am the interviewee, I always have a bunch of answers like this prepared in my head… although, to be fair, I’ve been in my field for ten years now, so I don’t have to think too hard about it.

Best answer so far: I work in digital advertising, and the kinds of answers I like to hear are focused on process*. Talk to me about how there are too many disparate systems, or how companies are too slow to change to meet market needs. If you have to, you can talk about a specific type of ad that doesn’t work for you. Just have an answer that you’ve given a good bit of thought to and can talk about for at least thirty seconds. 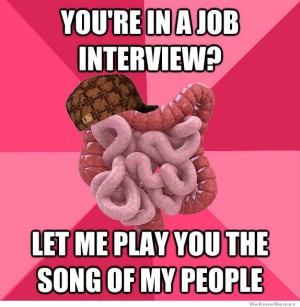 3. When you’re at an all-hands meeting, where do you sit? — Now we’ve moved into the personality questions. You can google weird interview questions and get lists to pick from, but I ask questions that interest me. This one I ask because I don’t like large groups and I don’t like large-group meetings. I personally tend to sit on the aisle, with no one to my right. This question tells me more about the candidates than I think they realize; the “right” answer of course is to sit in front and be attentive, but let’s be realistic here: I can tell when you’re making stuff up. I do usually ask why, and that gets me more thought than the quick answer of “the front” or “the back”. Because most people haven’t prepared for a question like this, there’s often a brief pause and then full honesty, and that’s what I want.

Best answer so far: I actually have two, and I got both of them in interviews I did last week. One was with a technical person who said he sits where he can best see the meeting leader. The other was with a woman who said she sits right in front. When I asked her why, she said, “as an African American, we were forced to sit in back for a long time, and I want to take every chance I can to be in front.” That may be the second most honest answer I’ve ever gotten, after “near the door, so I can get out of the room when the meeting ends.” 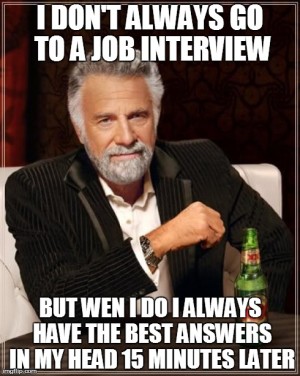 2. When you’re stuck in the middle seat on an airplane, which armrest do you use? — This is a personality question as well, but not necessarily in the way the candidates think. Well, not only in that way. Again, I want someone who gives me a quick answer, without trying to consider what I might want to hear; the only reason to be slow is if you put your arms on both arms of your chair so you can figure out what you usually do. I always ask why, because the reason behind your choice of armrests tells me a lot about you: are you more interested in fairness, getting along, or being assertive? It tells me what kind of a person we’re going to be (potentially) hiring.

Best answer so far: Both. One person I interviewed a few weeks ago said this, and when I asked why, he said: “the people on the aisle have extra space, and the window seat has the window. This is all I get, and I’m going to take it.” Which is fair, and tells me that the person is probably going to be assertive. So far no one has used my answer, which is: “neither; I usually travel with my daughter, so we put up the armrest between us and she leans on me.” What does that say about my personality? Probably that I’m a strong proponent of work-life balance, and that I’ll put my family ahead of the job. 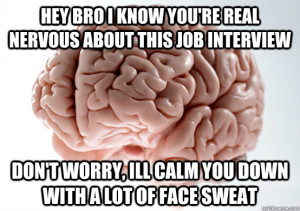 1. What’s the difference between Coke and Pepsi? — My dad, grandfather, and great-grandfather were all in the soda business, so when I was coming up with personality-based questions, this was the first one I put on the list. It truly has no right answer, and it doesn’t really tell me much, except “will you say what you think I want to hear?” Because I work in advertising, a lot of people think the “right” answer has to do with branding. They’re not wrong; it is a correct answer. But if you’re going to tell me the difference is “branding”, you need to say more than “they’re targeted at different groups.” One interviewee (who actually had worked for Coke in the past) said that Coke branding focused more family and tradition, while Pepsi’s was about what’s new, different, and edgy.

Best answer so far: I like my answer: Coke tastes like fuzz, and Pepsi tastes like metal. I prefer Coke from a fountain, but Pepsi from a can. What does this tell people about me? First of all, that I’m kind of weird because of how I describe the tastes — not sweetness or tartness, but the mouthfeel of each product. Secondly, that I’ve spent a lot of time thinking about this question. So, ultimately not very helpful to interviewers, but it gets a good discussion going. 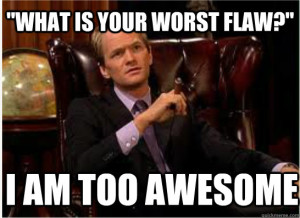 Speaking of weird questions in interviews, recently I’ve been teaming up with a co-worker who loves food. I mean, I love food too, but this guy’s a foodie. His first question, in every interview we’ve done, is “what’s your favorite sandwich?” The first time he asked it, I totally wasn’t expecting it, but I guess I should have been.

The answer, though, was even more unexpected. The candidate said “a Spam sandwich.” When my co-worker asked how he prepared that, the candidate said he finely chopped the Spam and then sauteed it.

Hey, man, whatever floats your boat. 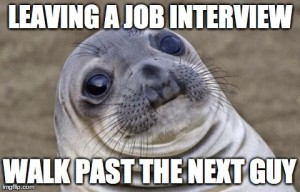 As for me, I don’t really have a favorite sandwich, but if I had to pick, it would either be the J’s Classic Club from J Christopher’s or the Triple J from TooJay’s.

I promise I don’t only eat at restaurants with J in the name. It’s just a coincidence.

* As if you haven’t figured it out already, process is huge with me. People who don’t follow process get worse service from me than people who do, and if my customers haven’t bothered to attend the appropriate training courses for the products I support, then I’m even less inclined to help them quickly.