SIX OF THE BEST… improvements SyFy made to The Magicians

The Channel Formerly Known As “Sci-Fi” has had a curious history over the years. It’s shown professional wrestling, bad movies, good movies, bad TV shows, good TV shows, way too many paranormal “reality” shows, and a rather well-received show about makeup and creature effects. In the past six months, they’ve poured a lot of marketing money into four dramatic shows in particular: the final season of Lost Girl, the second season of Twelve Monkeys, the first season of The Expanse (which, by the way, was pretty great), and the first season of The Magicians, based on the novel by Lev Grossman.

No TV show is perfect. Not even Firefly. I wasn’t expecting perfection from The Magicians, and to be honest I didn’t get it. I really enjoyed the books — especially the first one, which hung lampshades all over magic school and universe-next-door tropes — and when I heard about the show I was looking forward to how it was going to translate to television. And while I have my issues with it, I do think the televised version made some improvements. Here are six of the best of them. 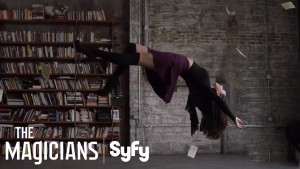 (Warning: spoilers for The Magicians and The Magician King, its sequel, as well as the first season of the show.)

(For those who don’t know: The Magicians is a book about Quentin, a magician who goes to a secret school and eventually ends up in a magical land.)

6. Showing Julia’s journey alongside Quentin’s. — In the books, Quentin and Julia are fast friends, but then Quentin is accepted to Brakebills, a magical college, and Julia is not. She shows back up at the end of the first book along with Eliot and Janet (in the show, Janet = Margo, because apparently viewers were too dumb to have two characters whose names start with “J”). It’s not until the second book that we find out what Julia was doing for the four-to-six years since she and Quentin parted ways (I’m not 100 percent clear on the time progression but I think that’s how long it is). She was taking an alternate path to learning magic, one that didn’t involve a school.

On the show, however, Julia’s journey is intercut with Quentin’s, to the point that some changes were made in the material to allow them to interact a little more. Given that they’re paying Stella Maeve second-billing money, they pretty much had no choice; you can’t shuffle off a star after the premiere and expect people to still care about her the next season. (Though at the pace they’re going, I don’t think they’ll get to the second book until season three or so.) 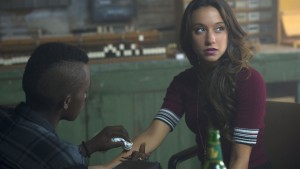 Julia (Stella Maeve) earns some recognition for her magic.

5. Speeding up the timeline. — The first two-thirds of The Magicians crams Quentin and Alice’s four years of study at Brakebills into a few hundred pages. Grossman does a fine job with the material, and it’s really enjoyable, but because it happens so quickly the reader doesn’t get the real sense of time that comes with reading, say, the Harry Potter series. By the time you get to their graduation, and the reunion with Eliot, Janet, and Josh (who isn’t even on the show until the 12th episode), the book has to stuff in another couple dozen pages of lazing around before it gets to the real action.

On the show, it’s just sort of accepted that even though Penny, Alice, and Quentin are in their first year at Brakebills (which, IIRC, is now a grad school instead of regular college), they can still hang with third-year spellcasters Eliot and Margo. While I think it’s a massive plot hole, it certainly does speed things up. I can’t imagine that the show would be as interesting if we went through four years before we get to the end of the first season. I’ll take that tradeoff. 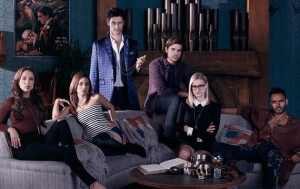 I really like how the show handles Eliot — although I’m sure some of that is owed to Hale Appelman’s portrayal. Eliot is definitely bisexual, but no one treats him as different or wrong because of it. The romance scenes (I think we only see him have sex once, but he is in a relationship for a couple of episodes) are positive and played well, and even his “stereotypical” friendship with Margo is supported by clear demonstrations of the non-romantic love the two characters have for each other — something that was really more just “strong friendship” in the books. Also, the threesome was much clearer in terms of “what actually happened”, and at no time does Quentin seem to feel anything negative about having sex with a man — instead, it’s all focused on how much he betrayed Alice by doing it. 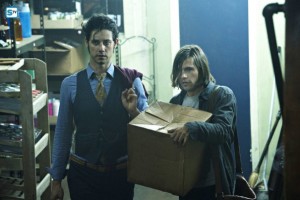 3. Portraying the professors. — Other than Mayakovsky (the guy in the Antarctic), the professors at Brakebills are just sort of “there”. Quentin has a crush on Sunderland, Dean Fogg is a powerful wizard, Van der Weghe and March and Bigby do whatever it is they do, but it’s not like other going-to-special-school books I’ve read in that the teachers are just window-dressing. I suppose that’s because Grossman was trying to get through the school parts so he could tell the rest of the story, but I’d have appreciated a little more.

On the show, the actor playing Mayakovsky is great, but there was a lot of source material for him to work with. Less so for Rick Worthy as Dean Fogg and Anne Dudek as Professor Sunderland. They get much more play in the show, and we get to enjoy Fogg dispensing his own version of Dumbledorian wisdom — and Sunderland as well. Also there’s Keegan Connor Tracy as Professor Lipson, who seems to run the infirmary, and even she gets to do some stuff. I don’t even remember who ran the infirmary in the first book, and I just reread it a week before writing this column. By giving the professors clear, defined characterizations and adding more scenes for them, the magical world of Brakebills is that much more real. 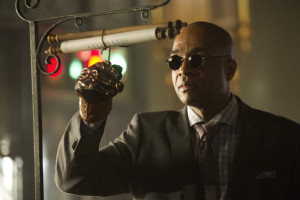 2. Making magic challenging. — Grossman is very clear in the books that magic isn’t easy, that it requires lots of research, knowledge, and fingerwork, and if you do it wrong, nothing will happen — or, worse, the wrong thing will happen. However, given the glut of magic-school books out there, it’s difficult to really accept that our characters won’t eventually get it right. Therefore, we don’t identify as much with their struggles.

But when you can actually show it, as they do on the show (especially in the Mayakovsky episode), the actors are able to communicate how difficult it is to do magic, to get the movements right, to control their emotions… and, more importantly, what it looks and feels like to fail, as they do. Often. Failure is a huge part of the collegiate experience — you learn a lot from getting things wrong — and I never really felt that the book versions of the characters got that (except for Julia). On the show, you definitely know. 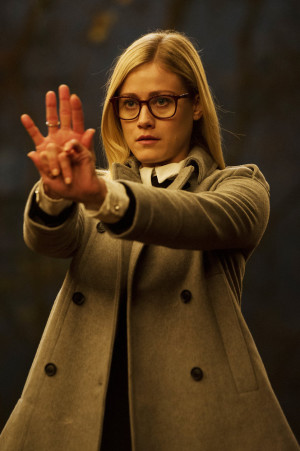 1. Recasting Penny. — Sometimes, casting makes all the difference. In the book, Penny is a pudgy white kid with a mohawk who is a powerful magician. He plays an important part later on, but in rereading the books after watching the first season of the show, I was like “eh”.

Enter Arjun Gupta, who plays Penny as a snarky, sarcastic spellcaster who uses drugs, has sex, and generally despises Quentin — at least at first. Gupta is by far the best part of the show, and I hope they write Penny into a lot more scenes. The producers may have cast an actor of color to check a box (given that the only other regular POC on the show is played by Rick Worthy, and he’s not even in the main credits), but I’m glad they went in the direction they did instead of making Penny more faithful to how Grossman originally wrote him. 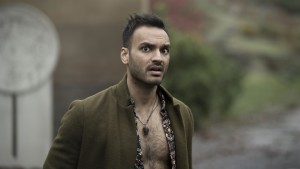 Speaking of Penny, one of my favorite scenes in the entire season features him. Quentin is trapped in his own mind, in a spell, but he knows that Penny is a traveler who can move between worlds, as well as a psychic. In the beginning of the show, Quentin has “Shake it Off” stuck in his head, and Penny accosts him because he can hear it in his head as well. Once Quentin realizes what’s happening in the spell, he organizes a dance number because he knows it’ll bring Penny into his mind.

Unfortunately, the video isn’t available in full on YouTube (I checked), but here’s the behind-the-scenes. If you can pull it up on your On Demand, it’s in episode 4. And it’s worth watching. 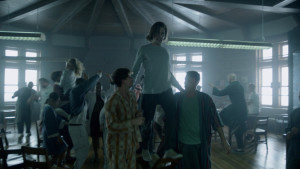 Quentin, about to Gene Kelly a chair.