Warehouse 13 was one of Syfy/The Sci-Fi Channel’s most interesting and consistently-humorous shows. Though it wasn’t always awesome — and though the third and fourth seasons were often “let’s put our heroes together in different pairs and send them on A/B plot missions” — I was always on board with whatever the artifact-of-the-week was, and I was always interested in how the season’s main villain was going to tie everything together.

To that end, here are six of the best fandom actor crossovers on Warehouse 13. Now, I’m not including everyone — it would be too difficult. Instead, I’m sticking to those from the biggest fandoms I could think of (which is why Jaime Murray from Dexter, Judd Hirsch from Numb3rs, and Anthony Michael Hall from all those 80s movies aren’t on the list). And one other caveat: I haven’t seen the final six episodes yet.

6. Star Trek — How about we start with the most obvious: Saul Rubinek — Artie, the head of the Warehouse — was a very memorable villain from Star Trek: the Next Generation, and he later faced off once again with Brent Spiner (in the fourth season). But we also had Jeri Ryan as Pete’s ex-wife Amanda, and Kate Mulgrew as his mother. Rene Auberjoinois played former Warehouse agent (and Artie’s friend) Hugo Miller, and Faran Tahir represented the reboot universe as recurring Head Regent Mr. Kosan. I mean, when you have something like 750 hours of television in your universe, you’re bound to share some actors with other programs. 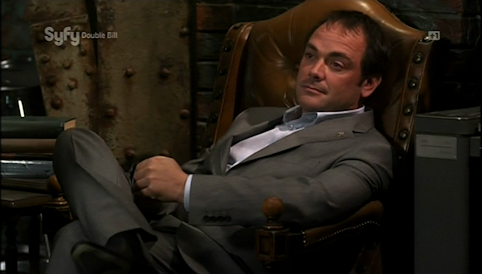 5. Battlestar Galactica (reboot) — Back when BSG was still a thing, Michael Hogan appeared in the first season as Myka’s father (and his real-life wife appeared as her mother). And Mark Sheppard*, who has a long and storied history across many fandoms (including Supernatural, Firefly, Chuck, The Middleman, and even Dollhouse), appeared on BSG as attorney Romo Lampkin in a role that took a huge page out of the book of Samuel T. Cogley. And, to complete that circle, Sheppard did appear on one episode of Voyager.

4. Other Syfy/Sci-Fi Shows — It would be silly for a network not to cross over with its own shows whenever possible, and by bringing Neil Grayston to the Warehouse as Fargo (and sending Claudia to Eureka), they fulfilled that… well, let’s not call it a “need” so much as an “obvious opportunity for cross-promotion and in-joke nods”. But in the fourth season, we got another quasi-crossover, with Polly Walker from Sanctuary appearing as the ageless Charlotte Dupres.

3. Veronica Mars — It’s just one episode, way down in the fourth season, but in “The Big Snag”, Enrico Colantoni (Veronica’s dad) appears as a noir author whose lost manuscript has the power to trap people in its pages. Appearing with him is Missi Pyle, who also shared the screen with Colantoni as a fellow Thermian in Galaxy Quest. Colantoni’s episode aired shortly after the Veronica Mars movie kickstarter ended. 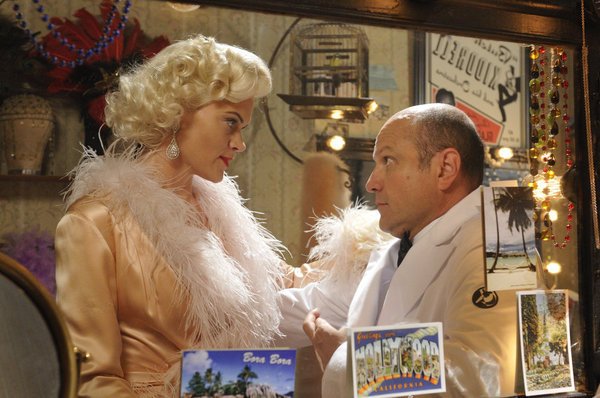 2. Buffy — James Marsters appears as a recurring character in the fourth season of the show, as husband to the aforementioned Polly Walker. In that same season, we meet another ancient character, this one played by Anthony Stewart Head. There are Buffy references aplenty, including oblique ones to Spike’s death, Randy Giles, and Captain Forehead. Plus plenty more that I caught when I saw Marsters’s first episode.

1. Firefly — And of course I couldn’t completely depart the Whedonverse without referencing what was probably the biggest fan-service guest-casting ever: Sean Maher and Jewel Staite as a couple, in love, who may be thrown apart by Sheldon’s (Maher’s character) use of Charles Atlas’s workout trunks. It was a cute episode, and a relatively fun one, and five years after we saw Simon and Kaylee starting to get it on while River watched from above, we finally get to give them a happy ending. So to speak.

My very first exposure to actress CCH Pounder was as Dr. Angela Hicks on ER, way back in the very first season. She was calm, cool, collected, and a good influence on our main characters. Since then she’s done a ton of TV work, but I hadn’t seen her in anything until Warehouse 13 aired. And she was an inspired choice as Mrs. Frederic, the mysterious woman who appears to never age and has the ability to appear and disappear pretty much at will. 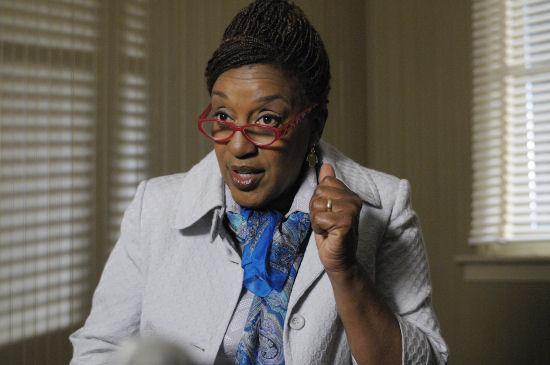 Which, interestingly, extends out to each of the main cast having a special ability of some sort:

My special ability is “can hold in farts indefinitely”. Can I be a warehouse agent too?

* Not to be confused with Mark Alan Shepherd, who played Morn on Deep Space Nine