SIX OF THE BEST… episodes of The Orville

I’m not a huge Doctor Who fan (although I appreciate the show when I see it), but one thing I do envy them is the Christmas specials. The season ends, and there’s nothing for a while, and then wham!, here’s an extra episode that is usually pretty good and also fits into the greater story arc as a whole.

I am a pretty big fan of The Orville, Seth MacFarlane’s tribute to Star Trek and episodic space opera, but it only ran for twelve episodes this season. I would love a Christmas special, but we’re not getting one of those, and the next season most likely won’t air until next fall. Orville fans are stuck rewatching and rehashing every episode, and that’s why you’re getting this column, which is six of the best episodes of The Orville.

The usual caveats apply: these are my opinions, you may have others; spoilers included for all episodes. 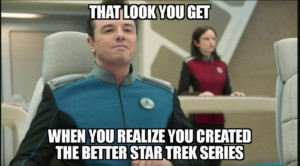 6. New Dimensions — Of all the episodes of The Orville in the first season, I think this was the most “Next Generation-y”. It was a mostly-bottle show with a spatial rift, a “it’s so crazy it just might work” solution, and an ensemble effort that focused on the engineer and the robot. It also elevated John to chief engineer, which was some big-time echoes of Geordi LaForge (I think intentionally). Plus, the visuals of the two-dimensional world were trippy and cool-looking, and when the episode was over, I was satisfied with how it ended.

On TNG it was… I’m going with “The Loss”, because it was the only one I can remember with two-dimensional life-forms. The Enterprise is caught by a two-dimensional field of beings that shuts off Troi’s empathy while dragging the ship toward a spatial rift. The 2-D stuff was fine, but I’ve always thought the episode fixed Deanna too easily. If you break your arm, the break happens in a second, but the recovery takes weeks; I think this would’ve been a wonderful opportunity to serialize, and have Deanna’s empathy come back slowly. Alas, it was not to be. 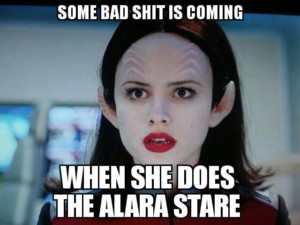 5. Command Performance — This episode was a little rocky — it was, after all, only the second one — but it was notable for showing us that the Ed/Kelly relationship wasn’t just going to be constant sniping (like relationships with exes are on most sitcoms) and also for giving us a deeper look into Alara’s character. There was a lot going on in the episode, and I didn’t love the joke of the climax (reality TV saves the crew), but it was still a strong entry.

On TNG it was… “Disaster”, another episode spotlighting the whole crew, had a storyline where Deanna, not a bridge officer despite holding the rank of lieutenant commander, had to take command of the ship in a crisis. None of the higher-ranked crew was available, and she had to do what she thought was best while worrying if her decisions were right. Like Alara, she had help from others to guide her (Ro and O’Brien), and like Alara, she didn’t destroy the ship. 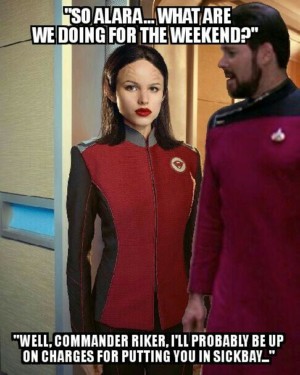 4. Old Wounds — Most shows usually don’t have a great pilot episode. You have to introduce everyone (and on many shows there’s a multi-person ensemble), and give them a problem to solve, and they have to all work on it together. I do think “Old Wounds” did a strong job of setting the stage, showing the main villains, giving us a little humor, and introducing us to the ship. I didn’t care for the “meet the bridge crew” scene because it felt a little clumsy, but at least it was realistic in that that’s how a new manager meets the team. Plus, this was only a one-hour episode, so there wasn’t time to layer everyone in the way other space operas have done.

On TNG it was… The only comparison here is “Encounter at Farpoint”, which is widely considered as not a great pilot episode. I did enjoy it, though — both when it aired and even now. Sure, it’s uneven in places, but it was able to show us what the tone of the show would be: thoughtful, hopeful, and occasionally exciting. It was enough to keep me watching. 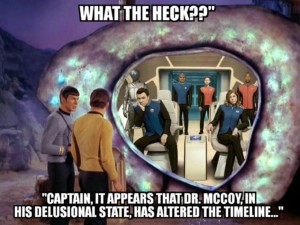 3. If the Stars Should Appear — This episode was a clear retread of several Star Trek tropes, most notably “For the World is Hollow and I Have Touched the Sky”. The crew goes to a generational ship full of people who don’t know they’re on a generational ship, and they all look pretty human, and eventually the crew reveals to some heretics that these people are all on a ship. It wasn’t groundbreaking in terms of the plot, but it really said a lot about what kind of show this was going to be and it had that great old-school sci-fi feel that I think a lot of people weren’t getting from other shows at the time.

On TNG it was… I hate to compare a good episode with a bad one, but the closest parallel that immediately comes to mind is “Homeward”, in which Worf’s brother Paul Sorvino joins a group of less-advanced individuals who all look mostly human and gets Dr. Finn pregnant (it’s the same actor). I know some people might say “Who Watches the Watchers”, which was an excellent third-season episode, but that one was a group of people who know who they are and that they live on a planet, whereas “Homeward” was a group of people brought onto a ship without knowing it. Close enough, I suppose. 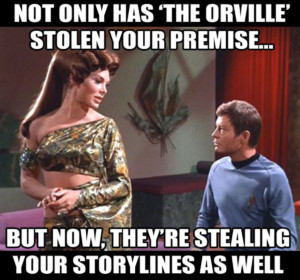 2. Krill — For some reason, Ed and Gordon and tapped to infiltrate a Krill destroyer and steal a copy of their holy book so the Union can figure out the best way to end hostilities. Hijinks ensue until they discover the Krill are planning to destroy a Union colony, and then Ed and Gordon find a way to stop them. Unfortunately it means killing every Krill on the ship with the exception of a teacher and some children. This one sticks with viewers because at the end the teacher isn’t grateful at all, and instead (rather heavy-handedly) tells Ed that he created a group of Union-haters that day.

On TNG it was… “Face of the Enemy” was a great episode — and another one featuring Deanna — where a member of the crew has to infiltrate an enemy ship. This time, though, instead of learning more about them, she’s there because the Romulans want her to save some dissidents. It’s a great insight into Romulan characterization, and after a while you start to empathize with the commander, who Troi has to walk all over. She’s just trying to do her job, to be the best Romulan she can be, but she’s not being allowed to do so. Unfortunately this episode was self-contained, but it was still quite enjoyable. 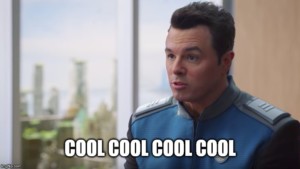 1. About a Girl — Here’s a pretty straightforward episode that everyone knew the ending of… until they didn’t. Bortus, the Orville’s second officer and a Moclan (a race of almost all males), has an egg with his mate (also a male). It hatches, and a female is born. On their planet, females are given gender reassignment surgery to turn them into males, but eventually Bortus decides his daughter should be allowed to be a female. They go to the home planet, there’s a trial, and the judge decides the child will undergo the surgery and become a male. Which was literally a kick in the stomach for anyone watching, because it’s rare for a show that’s tonally what The Orville is to turn in that direction.

On TNG it was… That said, TNG did it with “The Outcast”. Riker falls in love with a member of a nongendered species, and on their planet having a gender identity is considered a mental illness. The person identifies as female. Before she can leave, though, she’s brought before a tribunal and given therapy. In the end Riker and Worf try to rescue her, but by then the person’s mind has been changed and they leave without the person. A tough ending, but unlike The Orville there were no repercussions or reverberations throughout the rest of the show. 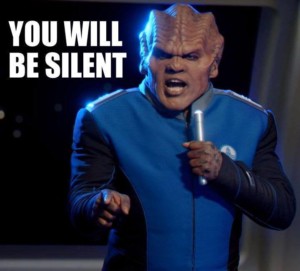 I bet you thought the bonus content would be the full list of twelve, in order, with some sort of commentary on each one. Well, since there are twelve episodes of the show, and I already have a top six, I instead will give you the bottom six in next week’s column.

So, since I’m not doing the full list thing, I’ll instead share with you something you might not know about “The Outcast”. According to Memory Alpha, Rick Berman (who some have said is homophobic, although having not met him I cannot make that judgment) didn’t want to show two men kissing because it wouldn’t be “palatable” to the average viewer. However, Jonathan Frakes was all for his love interest being played by a male actor.

Star Trek in general, prior to 2017, was terrible at showing non-heteronormative sexuality. It existed in the novels, and there were a couple of episodes, but for the most part anything that wasn’t “one man and one woman” didn’t get much play. Now I’m not saying there have to be non-heteronormative individuals in the main cast, but it’s realistic that, on Discovery, Stamets is a professional gay man in a happy relationship. Special attention isn’t drawn to it in any way, and really, that’s what I want. It doesn’t matter if you like boys, girls, both, or neither, and although I’ve given Discovery a lot of crap, I will say it has taken a giant step forward that Star Trek has been unable to do for fifty years.

Now if Discovery could just not crap all over any more canon, that would be great. 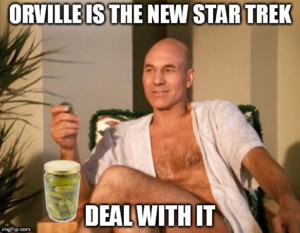 Wes Howard is fat. He’s tried dieting, exercising, and even gastric bypass surgery, but nothing worked. This Christmas Wes is going to learn why he is the way he is: it’s because he has a destiny — one that will take him to a gleaming castle farther north than he ever thought possible. Rish Outfield, co-editor of the Dunesteef Audience Fiction Magazine, calls Secret Santa “a Christmas story with an edge, with a bit of bite to it, that stands out from the crowd. That doesn’t mean it can’t warm the little cobwebbed corners of your heart before the end, but you’re in for a wild ride along the way.” Get your copy today and relive the holiday season… sort of.